Esports
News
Konami's PES successor has got overwhelmingly negative feedback, but is it that bad?
Joey Mills
10:05, 28 Oct 2021

You’ve seen the memes, laughed at the glitches, and mourned its role in killing the iconic Pro Evolution Soccer franchise. But have you played Konami’s erstwhile PES replacement, eFootball? If you haven’t, I don’t blame you. It is hard to recall a football game getting such a negative response, with the eFootball-hate even eclipsing the annual vitriol aimed at each new entry in the FIFA franchise.

We have already covered EA Sports’ latest foray onto the field here, so it’s only fair to weigh up Konami’s pilloried effort. Is it really as bad as the social media buzz suggests? The Sportsman were brave enough to find out, so you don’t have to.

eFootball is a free-to-play game, and has initially been released as a small-scale concern. There are nine playable teams, and just two game modes. You can either play an Exhibition Match or take part in an Event. The Events are simply a series of Exhibitions where you have to win consecutive games, meaning there is not much variety on show. Konami’s plan is to introduce paid-for modes further down the line, with their own take on Ultimate Team, and the ever-popular PES standard Master League, expected to be on the way.

With the modes being extremely bare bones, it is left to the action on the pitch to provide excitement. Sadly, it broadly fails. The first thing you notice when booting up your first match is the graphics. Not only do they not meet the standards of Next-Gen technology, they actually regress from the perfectly solid visuals of the PES 2021 Season Update. The pitch is pockmarked and artificial, and while the stadiums look wonderful, they are filled with fans who look like they walked over from a PS2 game. The most severe graphical issues however, are with the players.

Cristiano Ronaldo is the highest profile victim of the horrible visuals. One of the most recognisable athletes on the planet looks like a man having an allergic reaction to swallowing a bee, most egregiously during his trademark “Siiiiiiiu” histrionics. The most famous celebration in sport has the United man’s cheeks inflating like a beach ball. Their Ronaldo rendition gets even worse during the international fixture that serves as the game’s introduction. One of the first things you see when booting up eFootball is Ronaldo belting out the Portuguese national anthem, with his jaw swinging like he’s in one of those 90s underground rave videos you see on YouTube. eFootball indeed. 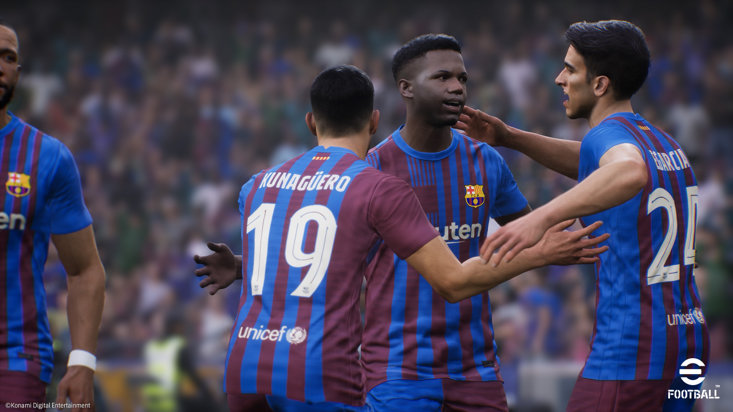 Ronaldo is not the only victim either. Argentina goalkeeper Franco Armani looks like he hasn’t slept in three days, while Scott McTominay has the flapping mouth of a man experiencing G-Force. Martin Odegaard comes off the worst, as the spitting image of Kiefer Sutherland’s character from The Lost Boys. The ropey graphics would be forgivable if eFootball delivered a decent soccer simulation. It sadly falls short in this category too. Passing feels unresponsive, and often the player you aim at will not even attempt to control the ball. One long ball I played rebounded off the face of a watching Angel Di Maria.

Pro Evolution Soccer prided itself on providing a deep, realistic interpretation of the sport. eFootball feels simplified. Strategy goes out of the window, with games becoming a staring contest of waiting for your opponent to misplace a pass and then immediately running past them to score. The vast tactical options from PES are also gone. Rather than being able to set individual player movements, pressing intensity and attacking runs you are limited to five generic options, such as “Possession Game” or “Long Ball”. This feels particularly egregious in the same year that FIFA have leaned heavily into the increasing popularity of analytics, with xG and heat maps a big feature of this year’s edition.

eFootball’s biggest crime, beyond the ropey graphics, scattershot passing and stripped-bare options is the fact it is simply boring. Once you have worked out the game’s pattern, you will win every time and not have much fun doing so. There is little replay value, as opposing teams approach every game the same way. You will feel like you’re in Groundhog Day, but instead of Bill Murray it’s Cristiano Ronaldo leaving a Happy Mondays gig.

Konami do have time on their side. This is just the initial release of a live service game. There will be updates, improvements and additions. But eFootball was a missed opportunity to capitalise on the promising game they already had in PES, with eFootball feeling like several steps back from that iconic title. You never get a second chance to make a first impression, and unfortunately the most fun thing about my first impression of eFootball was McTominay walking around with cheeks like Augustus Gloop.

x
Suggested Searches:
The Sportsman
Manchester United
Liverpool
Manchester City
Premier League
More
esports
Football Manager 2022: The Ultimate Management Sim Is Back
Dig out your favourite throwing water bottle and prepare to demand more, Football Manager 2022 is here. [ ... ]
esports
Forza Horizon 5: Perfecting The Formula In Mexico
It was 2012 when Microsoft and Playground Games released their attempt at an open-world racer, borrowing [ ... ]
esports
How To Spend Your First Day On Football Manager 2022
Call in sick, make a brew and unplug the phone (if you’re one of seven people in the world that [ ... ]
esports
Five Iconic FIFA Games: From The Dugout To The Streets
The wait is finally over, as FIFA 22 hits PC and consoles today. We have already test-driven the latest [ ... ]
esports
FIFA 22 First Impressions: How Does EA's Football Giant Measure...
The temperature has dropped, the nights are getting darker and the leaves are turning brown. You know [ ... ]
esports
Everything We Know About Pro Evolution Soccer's Transformation...
The Pro Evolution Soccer era is coming to an end. Konami has dropped the name and announced [ ... ]
esports
Take Your New PlayStation 5 To The Next Level With These Essential...
It is finally here, but are you ready? After the now traditional seven year wait, the new generation [ ... ]
esports
Insane Gaming Chairs For The PS5 And Xbox Series X To Take You...
The fridge is stocked, the controllers are fully charged and that shiny widescreen TV is glowing. The [ ... ]
esports
From Custom Garages To Classic Tracks, Get Ready For Gran Turismo...
Finding the best racing game for you, is akin to finding the perfect beer. The one that hits the spot, [ ... ]
esports
From Arena Building To A Revamped Career Mode, The 5 Best New...
Autumn has arrived in the Northern Hemisphere, meaning that the ‘holiday’ season of gaming [ ... ]
esports
From Fatboy Slim To Franz Ferdinand, The Five Best FIFA Soundtracks...
FIFA 21 is out this week and that means a fresh new soundtrack. Sure, we love the football, the gameplay [ ... ]
esports
Norris Drives On At 'Not The Australian Grand Prix' To Help...
McLaren driver Lando Norris might not have yet reached a podium position or recorded a fastest lap in [ ... ]
esports
A $500K Prize Pot & The Chance To Show Pros How It’s Done -...
The final showdown of the Formula One Esports series takes place on Wednesday and the winner will [ ... ]