Rugby League
News
It feels like a proactive restructure could now be well-timed
George Riley
20:30, 10 May 2022

This season increasingly feels like rugby league’s best opportunity to restructure and expand the Betfred Super League to 14 teams from next season.

This is not a new discussion. Indeed it is an almost annual one. Yet with two dominant sides leading the way at the top of the Betfred Championship, and a real threat of losing expansion side Toulouse from the top flight after just one season, it now seems the ideal time to incorporate a 14-strong elite and reshuffle the pack beneath it.

This will no doubt be among the ideas being discussed as part of the new strategic partnership with IMG announced on Tuesday, which is set to reimagine rugby league and its competitions in the UK.

The current 12-team format involves traditional home and away games with additional “loop fixtures” and a Magic Weekend, in a schedule that is a little haphazard. So why not just go to 14 teams home and away? What may have stalled this discussion before is the absence of 14 Super League-quality sides. Both Leigh Centurions and Featherstone Rovers would argue that there now are.

The two best sides outside of Super League appear well-equipped to step up. So there feels a strong argument to expand now, protect Toulouse from the immediate counter-productive relegation that is the eternal threat to every promoted side, and adjust to a more stable 26-game season of home and away fixtures.

With only one of Leigh and Featherstone set for promotion as it stands, it will see one heavyweight side miss out, and in all likelihood Toulouse, who have worked so hard to establish themselves in France as a viable Super League presence, dropping back down and asked to try again.

Given the gap in quality between Leigh, Featherstone and the rest, that would probably create another two-horse promotion race next season between Toulouse and whoever of Leigh or Featherstone gets left behind. Which does little for any of the other clubs making up the Championship. 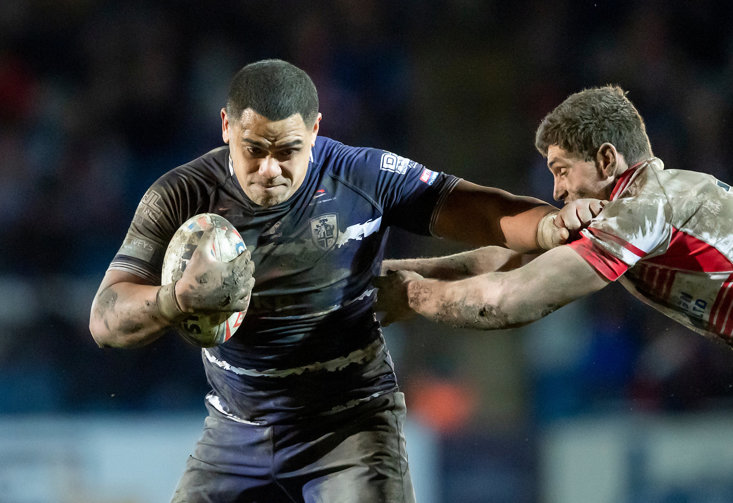 Leigh would be in favour of this of course, second favourites as they are for promotion. But I understand rivals Featherstone would also back such a proposal, despite being big favourites to go up anyway. The fly in the ointment of course is Super League’s self governance, and how many of the 12 clubs who run the sport may be willing to split their pot of cash still thinner?

With the covid-19 pandemic came a realistic threat to the very future of the game. There appeared set to be a natural culling of clubs in the lower echelons of the game, and despite the sport surviving through adversity as it always does, it does feel like a proactive restructure could now be well-timed.

Elsewhere, the Betfred Challenge Cup triple-header weekend produced excitement, drama and reason for optimism, but also a similar reminder that the sport must strive to be cuter in the challenges it faces.

Three matches, involving six teams, over one day at an iconic Elland Road venue, should have had the place bursting at the seams. Especially as the players produced the goods - they always do.

The women’s final in the early kick off was sensational as St Helens continued their dominance by edging out a spirited Leeds Rhinos. Then the first men’s semi-final produced a derby classic as Wigan toppled arch rivals Saints to end their hopes of another treble. The third game may have lacked the quality of the two matches prior, but it at least produced the narrative of unfancied Huddersfield booking their place at Tottenham under the shrewd stewardship of highly-rated coach Ian Watson.

But did it work as a spectacle? Just over 22,000 tickets were sold across the three matches and on TV it looked sparse throughout. By match number three the playing surface was giving way, with Huddersfield and Hull KR players repeatedly losing their footing.

Can we blame fans of Wigan or St Helens for not sticking around to watch the second semi given half of them had just reached the final and wanted to celebrate, and the other half had just lost the derby and wanted to be anywhere else?

The logic of making an event of all three matches makes complete sense, but the reality is often very different, and if the concept has future legs then perhaps we need a few tweaks.

Ticket sales and broadcast coverage could align in a conversation to prioritise filling the areas directly in line of camera vision to give the stadium a fuller feel. Only three sides of the Crucible Theatre are ever open to crowds at the Betfred World Snooker Championship for example, yet the broadcast product always creates the feel of a sell-out 360 degree coliseum. Likewise with big boxing events.

The passionate rugby league observer may worry therefore about how the sport sets about filling the Tottenham Hotspur Stadium in three weeks time - especially given sports fans from Huddersfield may instead spend their hard-earned cash following the football team at Wembley that same weekend - but the spectacle itself should be terrific.

Wigan will be huge favourites but Huddersfield are flourishing under the radar and will have every chance of producing a huge upset.