In 1966, Bobby Moore enjoyed English football’s greatest moment as he lifted the World Cup at Wembley.

In 1978, Viv Anderson became the first black player to represent the Three Lions first team in a move that paved the way for hundreds of players from different ethnic backgrounds to represent their country.

In 1990, Paul Gascoigne was the figurehead of an England side that inspired a nation and attracted a new type of football fan ahead of the Premier League being launched a couple of years later. Speaking of the 90s, David Beckham went from villain to hero in a matter of years and also became the first real footballing celebrity of the modern era in the mid-noughties, encapsulated by his mega-money move to join the Galacticos of Real Madrid.

Since Becks, England have lacked a true figurehead - an inspirational poster boy if you will. Wayne Rooney looked like being that player when he burst onto the scene in 2004 but that failed to materialise after a disappointing tournament. Now the nation has fallen in love with Gareth Southgate’s fresh-faced England after they equalled their best World Cup showing since 1966 in Russia.

The Nations League provides another chance for a trophy this summer but the big test will come next year, at Euro 2020. England can go into both tournaments knowing they have the perfect figurehead and role model to represent them in across both tournaments. Nope, not captain Harry Kane but Raheem Sterling.

The man who has dealt with seemingly everything including abhorrent racism has now turned the media agenda around almost single handedly. He was targeted by the tabloid papers for everything whether it be buying his mum a sink, shopping in Primark or having a tattoo on his leg. In recent years he has spoken out about this racism and by doing so, helped stop this blatant targeting of young black players. 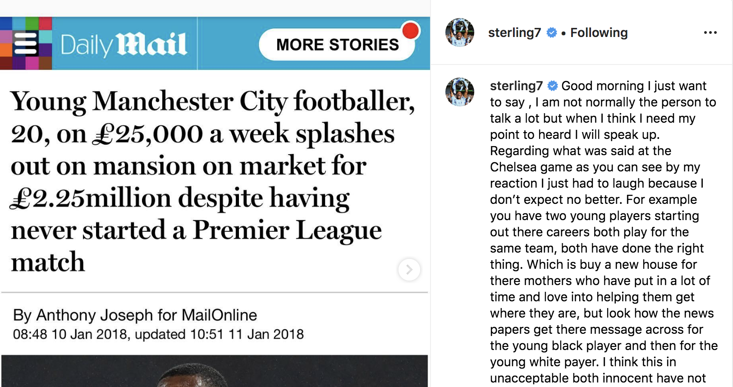 According to ft.com, In 2019, the MailOnline have published more than 1,000 stories featuring Raheem Sterling’s name but none of them have come with a derogatory headline. Instead we see words such as ‘generous’ and ‘inspirational’ in front of his name, with his work in the community being picked up instead of his shopping habits.

His ‘fingers in ears’ response to Montenegro fans racist abuse of him as he scored England’s fifth showed how far he has come in recent years and he was rightly commended for his actions. But it is not just off the pitch that Sterling has turned into an inspirational role model for youngsters. He is now England’s best player and vital to Gareth Southgate’s modern system.

Harry Kane may be the best striker in the world on his day but in terms of form and importance to the team, Sterling is slightly ahead of the captain. Pep Guardiola must be given credit for the improvement the winger has shown since playing under him at Manchester City.

In his first season under Pep he scored ten goals and bagged 20 assists in 47 appearances across all competitions, a very good return for a wideman. But Sterling had limitless potential that needed to be unleashed and that is what we were treated to the following season.

As City won the league with a record 100 points, Sterling scored 23 goals and 17 assists across all competitions. He showed no sign of slowing up this campaign as City won the domestic treble he broke that personal record, scoring 25 goals and registering 18 assists. Remarkable numbers for a man who rarely plays as the central striker.

Guardiola has transformed him from a player with little end product to a ruthless attacking force who is unstoppable against most teams. For England, he has produced similar numbers this season scoring six goals in his last four games for England across the Nations League and European qualifiers.

Sterling deserves all the plaudits he gets and will be vital to England’s future success in major tournaments. Come on Raheem, bring the Nations League home! 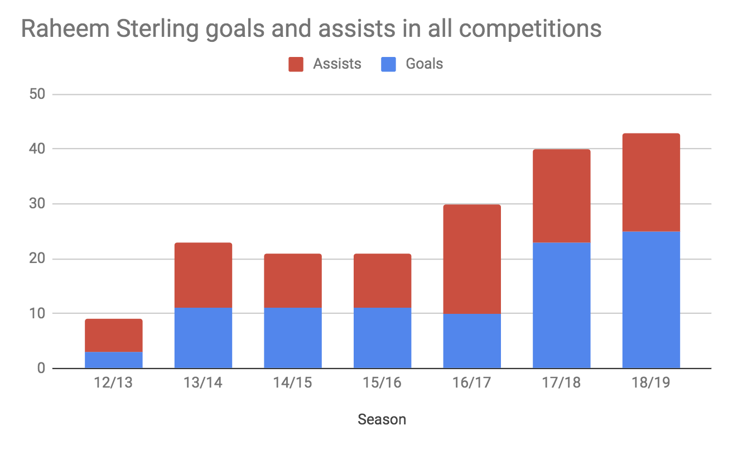