Motorsport
News
It has been a tough couple of weeks for Toto Wolff's team
Simon Lillicrap
13:30, 07 Jun 2021

Mercedes were handed a massive lifeline this weekend. Until Max Verstappen suffered a tyre failure with just three laps to go, Red Bull were on course to not only secure a one-two finish, but put down a serious marker in the race for both the Drivers’ and Constructors’ World  Championships.

A win for Verstappen would have taken him 15 points clear of rival Lewis Hamilton, who blew his own chance to win the race after the restart. Going all out for the win, Hamilton dived down the inside of eventual race winner Sergio Perez before locking up, having inadvertently flicked the ‘magic’ switch, careering off track and out of the race. Despite this missed opportunity, Mercedes will feel some relief that the status quo was maintained at the top of the standings.

This is a team who have won the last seven Constructors’ Championships in a row. Even Michael Schumacher’s Ferrari didn’t achieve that level of dominance, but in recent weeks something has seemed off with Mercedes. In Monaco, the team were off the pace as Hamilton finished seventh and Bottas did not finish at all, while in Baku Charles Leclerc took pole as the seven-time champion somehow recovered to qualify in second.

Of course, you can look at bad luck in both of those races. Hamilton’s mistake is a freak occurrence which is unlikely to happen again, while without Bottas’ wheel-nut issue the Finn would have secured a podium finish. However, the issue that raised its ugly head once again in Azerbaijan was a serious lack of pace, something which has not been an issue over the past seven years.

Even when Hamilton got himself ahead of pole-sitter Leclerc, despite his best efforts he was unable to pull away from the Ferrari driver. During his era of dominance we have seen critics attack him for winning in the fastest car, but that certainly isn’t the case in recent weeks. If he wins this championship it seems like it will be based on raw skill, rather than the mechanical strength of this Mercedes.

"What I take away is that we must bring our ‘A game’ to fight for this championship, and our car was not there all weekend,” Mercedes boss Toto Wolff admitted after the race.

“Operationally, we just need to perform faultlessly and all of us haven't done that the last two weekends. I’m so angry, but I've got to transfer that energy into something productive so we can improve next time out at Paul Ricard.” 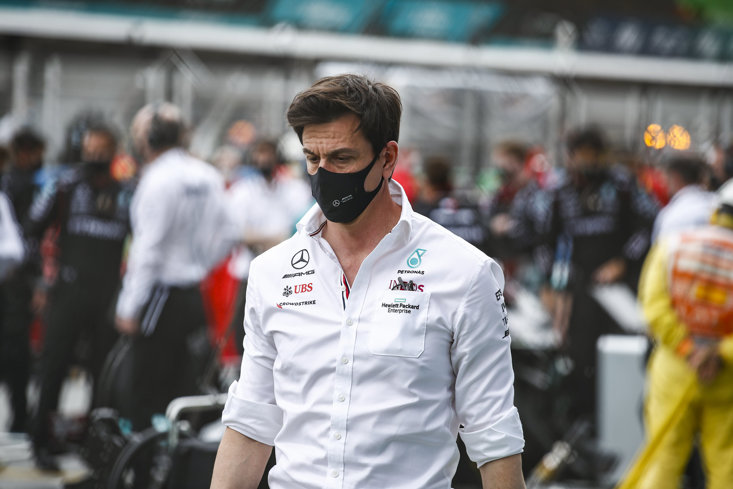 Wolff isn’t used to losing, but it is more than apparent that Red Bull have closed the gap dramatically between the two teams. Christian Horner’s team may have even surpassed the German giants.

"We just need to be the best of us, the best that we have, and we haven't given the drivers a competitive package this weekend - far from it,” Wolff said, clearly full of frustration. “It is not only the incident at the end that frustrates, it is overall not meeting our expectations, all of us together - Lewis, the engineers, myself, everyone in the team.

"There's just so much we need to improve that I just want to get on it right now to make sure we are able to compete for this championship because we can't continue losing points like we did in Monaco and here. It's just not acceptable, for all of us."

Perhaps the street circuits of Monaco and Baku, both tracks which feature slow corners and low-grip surfaces, have caught Mercedes out this time around. Heading to a quick circuit in France before a double-header in Austria should suit the team more given their past performances, but seeds of doubt are starting to emerge in their ranks.

Red Bull could have put Mercedes to the sword this weekend, but it wasn’t to be. How the current champions respond to their last month of underwhelming and inconsistent performances will go a long way to deciding who will be crowned champions in December.