Just when Manchester City were being unofficially crowned Premier League champions by pundits, bookmakers and fans, Southampton have put a spanner in the works. While the Cityzens sit twelve points clear of second-placed Liverpool, Jurgen Klopp’s men now have two games in hand on their title rivals. The potential is there for Liverpool to make things too close for City’s comfort, after the champions were held at Saint Mary’s.

Few would have chosen Southampton as the team most likely to open the scoring. Fewer still would have chosen Kyle Walker-Peters as the man to break the deadlock, but that’s exactly what he did by netting his first ever Premier League goal. The right-back exchanged passes with Nathan Redmond before hitting a sweet finish with the outside of his boot to put the Saints ahead. It was an electric piece of play, and arrived when Southampton had only enjoyed 4% possession during the seven minutes preceding the goal.

One might have expected City to go all guns blazing in search of an equaliser, but while they retained the ball well, they did not dominate in terms of chances. Armando Broja, Southampton’s loanee from Chelsea, was the standout attacking player of the half. With a greater command of the offside trap, he could have had a goal and won his side a penalty. First, the Albanian forward latched onto a through-ball and slotted cooly past Ederson before being flagged offside. Then the goalkeeper brought Broja down in the box, but once again the 20-year-old was adjudged offside.

Pep Guardiola’s side did have a golden chance to go in at half time on level terms. A driving run from Phil Foden saw the midfielder pick out England teammate Raheem Sterling. The 27-year-old had time, but put his shot too close to Fraser Forster, who saved well. It was a glaring opportunity to take the initiative before the break.

Sky Sports Premier League
@SkySportsPL
That is sensational. 🔥
Kyle Walker-Peters grabs his first goal of the season in some style as Southampton stun Manchester City! 😇 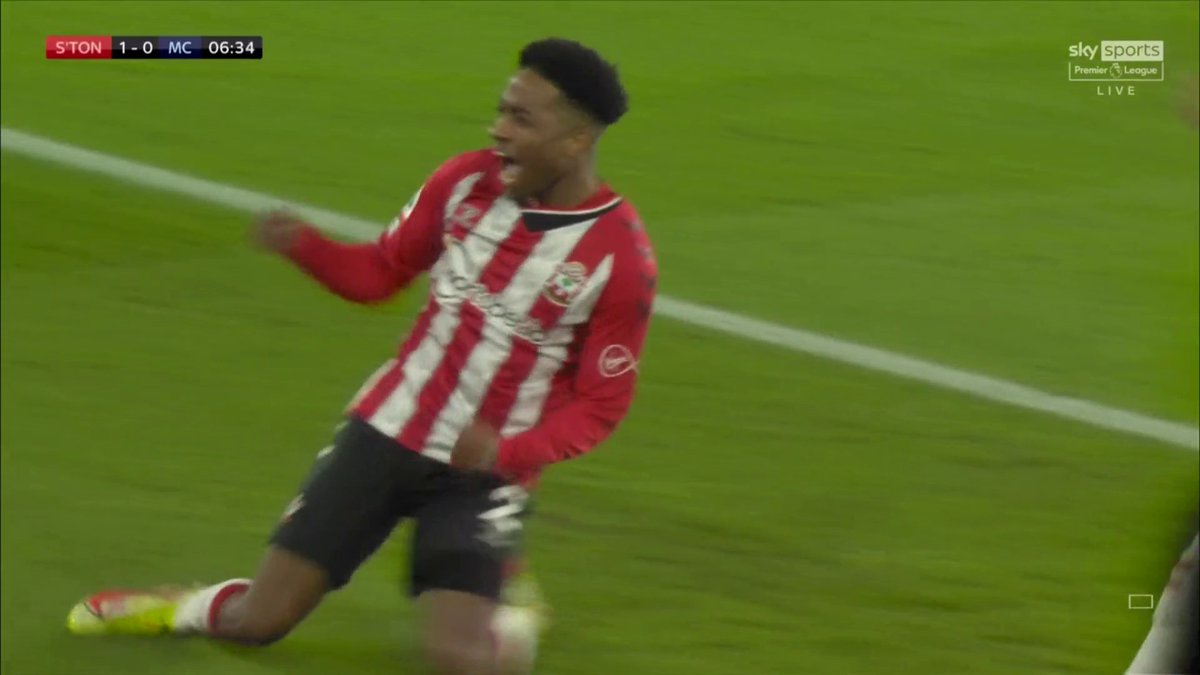 The second half started at an electric pace. Bednarek flicked on a corner which Ederson reacted brilliantly to stop. Then a Walker-Peters mistake teed up Rodri for a half-volley at the other end. The midfielder hammered it into the turf, leaving a difficult bounce for Forster to push wide.

Broja broke with a driving run, only to be denied by the outstretched leg of Aymeric Laporte when he shaped to shoot. The on-loan Chelsea star then hit the post from the resulting corner, as it began to look like he was cursed with not getting on the scoresheet. It was a breathless beginning to the second period.

When the game settled, normal service resumed as the Cityzens drew level. A precise Kevin De Bruyne free kick was met by Laporte, who had timed his deep run to head past Forster. It was cruel on Southampton perhaps, but City had piled on the pressure since the resumption of play.

As City pored forward without breaking through, it was easy to ponder the old question about the Premier League champions. Would a team who fielded Jack Grealish in a nominal centre forward role benefit from a more orthodox striker against a team defending as resolutely as Ralph Hasenhuttl’s men? It is a debate that will no doubt rage on until the next time Guardiola’s team blow someone out of the water by five or six goals.

A penalty claim looked like City’s best chance of taking the lead as the minutes ticked down, with Kevin De Bruyne being brought down by Oriol Romeu. A VAR check denied the away side their spot kick, only adding to City’s frustration.

Grealish and De Bruyne both had late half-chances, the latter having a shot blocked while the former dragged a long-distance effort wide. The Belgian forced a solid late save from Forster, but then his side ran out of time. This draw is unlikely to puncture City’s season, but it is an interesting wrinkle in the narrative of a title race that had looked done and dusted.