Ebanie Bridges meets IBF bantamweight champion Maria Cecilia Roman this Saturday as she aims to finally realise her world title aspirations. The 35-year-old former teacher from New South Wales is challenging for world honours for the second time, having lost in a 2021 WBA title tilt against Shannon Courtenay.

Unlike the build-up to that points loss to ‘The Baby Faced Assassin’, Bridges says her camp this time has been “unreal”. Speaking to the Lightweight Boxing Show, the likeable challenger broke down her preparations for her upcoming bout.

“Pretty much every single camp I’ve had has been a problem. Injuries, flying around the world here, there any everywhere. Change of trainers. Different trainers every camp because I’m stuck in the UK. Honestly everyone knows I haven’t had a training camp where I haven’t been injured or nursing something. My headspace for this, I’ve been settled in the country.I really can’t say there’s ever been a better camp.” 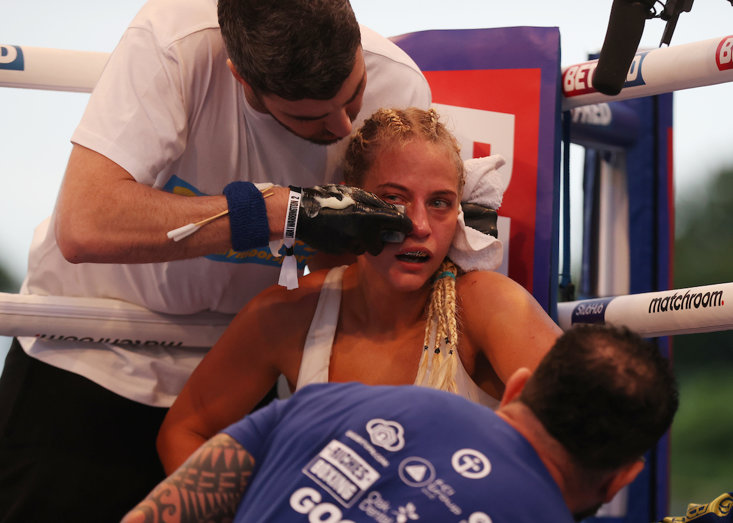 no pain, no gain: ebanie bridges battles through against mailys gangloff

Now working with an England-based trainer, it was put to the 7-1 star that she might consider moving to the UK full-time. It is a move that 2018 Commonwealth gold medalist, and fellow Australian, Skye Nicolson has just made herself. However for the time being, proud Aussie Ebanie intends to split her time between the two nations.

“I have a boyfriend at home that I’ve seen for like ten weeks in two years. I mean I don’t know if he’s going to be there when I get back! But I have family… the problem is I have commitments back home. I’ve got a house, I’ve got everything there. It’s my decision, and trust me I want to be here. If I’m able to just come for my camps and it works then okay.”

However, Bridges is in no rush to leave England, and Leeds in particular, after this weekend’s fight. The boxer has been adopted by the city, and she supports Leeds United Football Club. The affection is very much reciprocated, and should Bridges get the right result on Saturday, she could well be sticking around for a while.

Leeds is renowned for the magical atmosphere it provides on nights of high-level boxing, and this Saturday promises to be no different. Bridges opened the main card at Headingley when Josh Warrington fought Mauricio Lara for the second time in September. This time, her name is on the marquee alongside the featherweight star, and she is relishing every single moment.

“It’s going to be incredible, especially since my last fight here it was only announced to fans that I was fighting five days before the fight and I was first on the card. Now they’ve had eight weeks to get ready, get their accommodation and to plan their weekend to be in Leeds and watch me and Josh win a world title. And I’m going to be co-main. It’s going to be absolutely insane.“

As well as the passionate support in Leeds, Bridges can bank on plenty of fans willing her on back home. Ebanie understands that this fight is important not only for her career, but for the future of Australian boxing.

“Aus boxing is getting much more traction at the moment. But we don’t have a really big Aussie women’s name. Obviously me, but I’m not a world champion. But me being able to get a (fight with a) world champion, and show you can go after your dreams and make it happen. For me to bring it back I’m sure is going to be huge for Australia. All of Australia is behind me and backing me. It’s a big fight and I’m really excited.”

While it is often an act of folly for a boxer to look past their opponent, you cannot blame these ambitious athletes for considering what comes next. Bridges is focused on taking every opportunity that comes with wearing world gold. When asked by Anthony and Dom what comes next, her answer showed her drive and determination.

“Unify. There’s some great champions in the division, I’d love to do that. Defending it in Australia. It would be great for Australian boxing for a female world champion to be there defending it. It’s a dream that I have. When I win this belt, the world is my oyster. I can literally do anything. So many doors will open for me and I’m looking forward to those opportunities and I’m looking forward to those opportunities. Whichever one makes sense and whichever one excites me, I’m going to go for.”

It promises to a quite the night for Ebanie Bridges and her followers at the First Direct Arena on Saturday. Fans here in England and Down Under will be cheering on ‘The Blonde Bomber’ as she aims to realise her world title dream. With that kind of support behind her, you certainly wouldn’t want to be stood in her way.