Ah, the Club World Cup. The competition you always thought could be quite good but was just something that nobody really cared about. Until now.

This year it feels different. This year we care. Or at least more do than ever before. And we can put that down to Jurgen Klopp and his brand of heavy metal football at Liverpool.

Liverpool will jet off to Qatar to partake in a semi-final and a potential final, against the reigning champions of all the other continents. The tournament gets underway tonight as Al-Sadd of the host nation, managed by none other than Barcelona legend Xavi, take on minnows of the competition Hienghene Sport, from New Caledonia.

For those of you who aren’t aware French Territory, it lies to the east of Brisbane Australia, in the southern pacific. The beaches are picturesque, the lagoons lined with marine life, yet unfortunately, their footballers are not quite on the same level as Liverpool’s and they cannot boast the finances that Al Sadd can.

With Xavi in charge, the Qatari club can boast big names such as former Atletico Madrid midfielder Gabi, which means it is unlikely Hienghane Sport will progress. However, like your nan after a few glasses of sherry, we could be in for a shock, the two sides meet at 5.30pm on Wednesday afternoon to get the tournament underway.

The winner of that tie will take on C.F Monterrey, the Mexican club who won the CONCACAF Champions League this year in the quarter-finals. It would be normal for me to insert a pun here but I’m just not feeling that cheesy. With Premier League experience in the shape of Vincent Janssen as well as quality in the form of Dorlan Pabon and jack Miguel Layun, the side who finished third in 2012 will be hoping to better that performance this time around.

In the other half of the draw Al Hilal, with Bafetembi Gomis, Sebastien Giovinco and Ali Al-Habsi in their ranks will take on Es Tunis, the champions of Africa. The winner of that tie will face South American champions Flamengo in one semi-final while Liverpool will come up against Monterrey, Al-Sadd or Hienghene Sport. The winner of those two semi-finals will then meet in a final on December 21 in the Khalifa International Stadium in Doha.

Flamengo are likely to be Liverpool’s biggest challengers for the title. The winners of the Copa Libertadores scored two late goals through Gabriel Barbosa to snatch the trophy from River Plate in one of the most exciting finishes to a final we have seen in recent years. They should qualify the final no matter who they face in the last four.

Hopefully, the finalists will serve up a Christmas cracker as the losers of the semi-finals are consigned to the third-place play-off, something as unwanted as a soggy brussel sprout on your Christmas dinner. Jurgen Klopp’s side will be desperate to add more silverware to the cabinet and join the only other English club to win this competition, Manchester United. 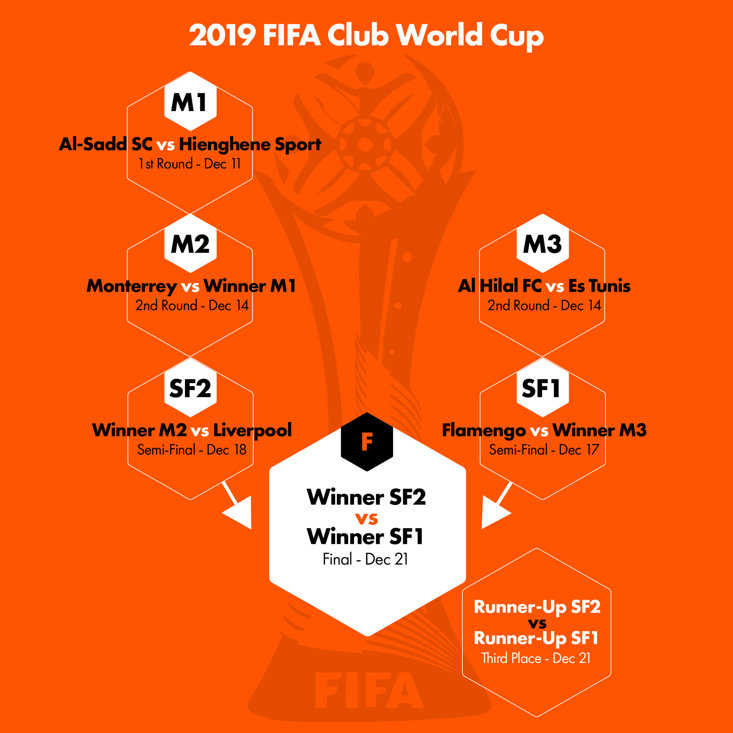