Football
News
From making tea for Fergie to the cusp of promotion with his hometown club, it's been quote the ride for Fraizer Campbell
Neil Goulding
08:35, 27 Mar 2022

Fraizer Campbell used to make cups of teas for Sir Alex Ferguson. Now aged 34, the experienced professional is on the cusp of a memorable promotion to the Premier League with hometown club Huddersfield Town.

Campbell started his career at Old Trafford but, like many young stars, the striker faced fierce competition for regular first-team football with the 13-time Premier League champions.

And after Fergie let him leave for pastures new, the former Academy graduate rose to the challenge of proving he has what it takes to cut the mustard at the top level.

“Sometimes you don’t see any light at the end of the tunnel and you’re never really get that chance.

“He [Sir Alex] was always nice with me, but it was difficult for me at Manchester United. I was there from when I was 10 until when I left when I was 21.

“He was always messing around with me, getting me to get the teas and coffees in for everybody.

“But that was his fun side, that was the old school vibe. He was an unbelievable manager.”

Campbell was a product of United’s successful youth system and, after scoring 14 goals in 22 starts for the club’s successful Under-18 side, it wasn’t long before Ferguson gave the hitman the chance to shine for the senior team. After signing his first professional deal with the club, Campbell made his debut as a second half substitute in Roy Keane’s testimonial match at Old Trafford. 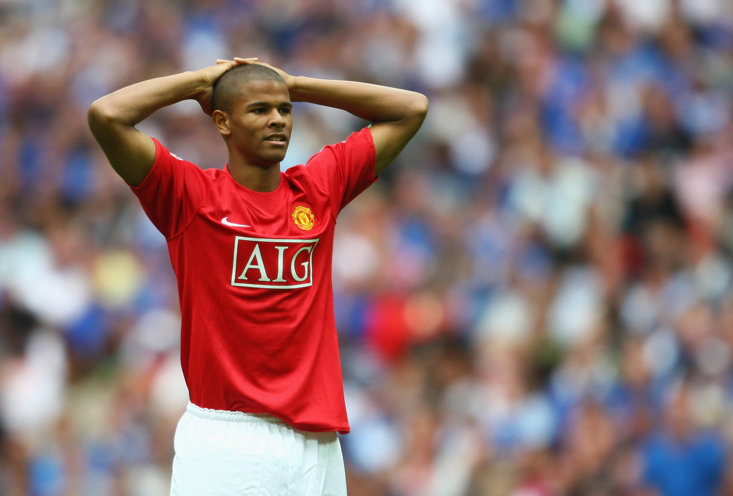 He scored his first goal against Macclesfield having replaced Wayne Rooney, but despite showing immense promise, he was loaned to Spurs as part of a deal which saw Dimitar Berbatov join United for £30.75million in September.

Hull offered United a then club record fee of £7million for Campbell’s services, but the bright lights of London beckoned – and he was off to the capital.

“Manchester United was always the team I supported, so it was just a dream rubbing shoulders with the likes of Ronaldo, [Carlos] Tevez and all those top players,” he added.

“But the best part of the week is definitely a Saturday, without a doubt. You want to be out playing. If you don’t get that then sometimes you have to go out and get it.

“I went out on loan to Royal Antwerp [United’s Belgian partner club] with Danny Simpson.”

Ironically, Campbell and Simpson got the chance to play together again when the former Premier League winning Leicester City defender joined the Terriers on loan in September 2019.

“It was life lessons for us both, playing in a men’s league at 18,” he recalled. “It was good for me as a footballer.

“But when my time at Manchester United was up I knew I had to go somewhere else and make a career for myself.”

After leaving the Red Devils, Campbell never looked back and, after successful spells with a string of top clubs, he has seen his career come full circle and is loving life having returned to his roots with hometown club Huddersfield. So much so that in the twilight of his career, a potential Premier League return beckons.

Campbell joined the Terriers on a free transfer in the summer of 2019 and has embraced life back in West Yorkshire. He’s been an ever-present in the side the last few seasons – and has enjoyed an impressive 16-year playing career.

“I went on to get promoted with Cardiff and got promoted into the Premier League,” added Campbell. “It was a great experience.

“I’ve got so many [career] highlights I’m proud of. I’ve played at Old Trafford, played for Spurs and England. I’ve had a good career.

“And I’ve been to Wembley a few times with Hull, so hopefully there’s another highlight in the locker.

“Hopefully I can do something special with Huddersfield, that would mean a lot to me.”

Huddersfield are 8/1 to get promoted with Betfred*

But, as well as having impressed on the pitch, the down-to-earth footballer has also worked incredibly hard off it as a proud ambassador of the Huddersfield Town Foundation. The Foundation works tirelessly to help improve the lives of young people across the region, with the ‘Early Kick-Off’ Breakfast Club initiatives at 41 primary schools across the Kirklees borough of the town, where children are given a free healthy breakfast.

It’s an initiative close to his heart having experienced a similar tough upbringing. He loves nothing more than now helping and inspiring kids, many of whom come from socially-deprived backgrounds, to succeed in life.

“I’m doing a lot of work with the foundation, it’s really important to me,” stressed Campbell.

“I’ve got an opportunity to help and that’s something that means a lot. I want to use my privileged position to help people in any way I can.

“The Foundation do great work. I’ve got my own kids so it makes me want to do more work in the community.

“Every child should have a breakfast, it’s sad to think some kids don’t get a healthy breakfast and might not have eaten since lunch the day before. It’s really nice to help.

“Football is a journey at the best of times, but it’s nice to end up back in Huddersfield. It’s great to be back home."