Football
News
Following Italy's failure to qualify for the World Cup, It is time for the old guard to be moved on
Conor Keane
15:05, 25 Mar 2022

When Italy failed to qualify for the 2018 World Cup, the footballing world was shocked but acknowledged it as a one-off, bizarre anomaly. Then Roberto Mancini came in and seemed to turn the Azzurri around and guided them to Euro 2020 glory less than a year ago.

No one would have even thought that history would repeat itself but, having been defeated in stoppage time in the play-off semi-final against North Macedonia on Thursday night, Italy will now miss their second consecutive World Cup finals.

It is truly baffling to see the European champions revert back to their troubling ways of four years ago and for all the positive atmosphere that the last few years generated for them, it is quite hard to understand how they have failed so miserably once again.

To not have the current European champions in Qatar later this year leaves a mark on the proud European game. When you think back to not so long ago, when Mancini’s men went on a record 37-game unbeaten run, it is hard to comprehend how easy it has been for the mistakes of the past to creep in again.

Last night’s defeat will be one that each player will be traumatised but it won’t be the only one. Their draws with Switzerland were equally as decisive in their exit.

Like with any shock upset across any sport, the blame game and finger-pointing starts almost immediately, but the players themselves have been quick to take responsibility for their failings, with midfielder Jorginho admitting his missed penalties against the Swiss in the qualifiers will haunt him for the rest of his life.

Veteran defender Giorgio Chiellini said: “It is clear we are destroyed and crushed, a great void will remain with us.”

Paris Saint-Germain midfielder Marco Verratti labelled North Macedonia’s late winner as a “real nightmare” and that he and his teammates needed to ask some questions as to how the unthinkable had happened once again.

Sky Sports Football
@SkyFootball
WOULD YOU BELIEVE IT!!! 🤯
North Macedonia have scored in added-time 😱
Italy are on the brink of not reaching the World Cup 😳
1264
9736

While the shock at Italy’s short-comings for the Qatar and Russia World Cups is well-founded, the steady decline has been in plain sight ever since they were crowned World champions in 2006. It has almost been 16 years since their triumph in Germany and in the World Cups that have passed, they haven’t featured in a single knockout game and have only won one group stage match, against England in 2014.

As defending champions in 2010, they crashed out at the group stage after drawing with New Zealand and losing to Slovakia. It would seem as though Mancini’s recent renaissance hasn’t quite been the transformation it appeared to be, rather a lengthy honeymoon period, and that there are still some deep underlying issues which are holding back the Azzurri on the world stage.

There will be no sympathy with the European champions as this World Cup decline has almost spanned two decades and that is more than enough time to overcome their issues and re-establish themselves as the strong international force that they should be. As is with the modern game, Mancini’s position is already being reported as at risk, but he has already delivered his nation a title and of course that extraordinary 37-game unbeaten run. 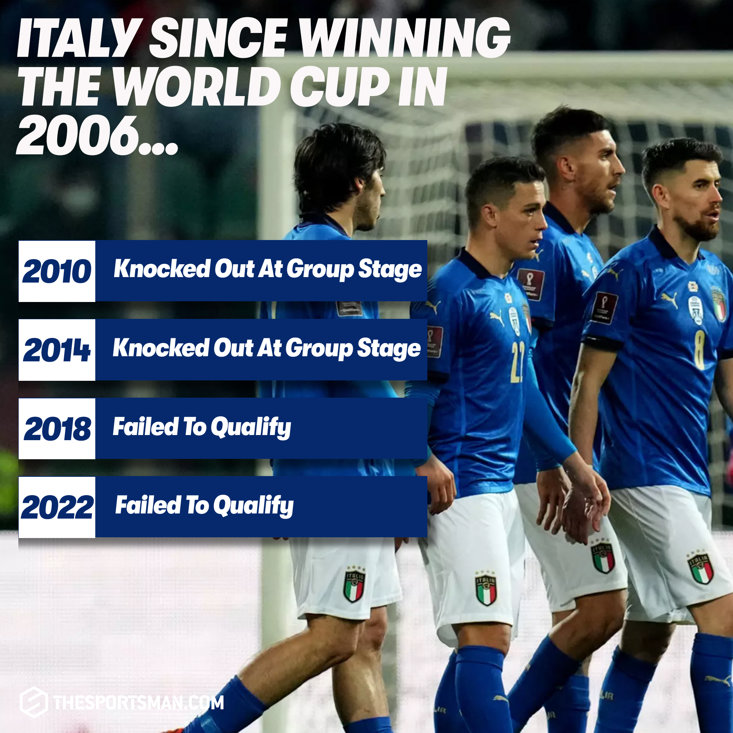 He has things to work on given he has been unsuccessful in guiding his side to Qatar, but there are players within this squad who have now been responsible for Italy missing back-to-back World Cups, and it would suggest that it is time for an overhaul.

Players like Chiellini and Leonardo Bonucci have been great servants to their national side and have had extremely reputable careers, but the game is evolving all the time and it is time for the Azzurri to move with the times.

Mancini should look to oversee a rebirth in which he beds in and nurtures a fresh generation of talent that will form the Italian national team for many years to come. New faces and perhaps even methods are needed to get them up to scratch with those who have no problems qualifying for the World Cup.

It is time for the old guard to be moved on and for the next generation to be ushered in as it is the only way Italy can correct their course and return to being the worldwide force to be reckoned with that they were only 16 years ago.