Football
News
It’s Up for Grabs Now...The Story of 1989 And The Greatest Title Race Ever Between Liverpool And Arsenal
Matthew Crist
11:48, 08 Nov 2017

To mark the release of the new film 89 we take a look at surely the most dramatic night ever in English football as the two top sides in the country fought it out for the league title in the final game of the season...

When Michael Thomas of Arsenal charged through the Liverpool defence in the 92nd minute and slotted the ball calmly past Bruce Grobbelaar on the night of May 26, 1989 it provided the most dramatic end to a football season ever as well as a moment that’s unlikely to be replicated anytime soon, and here’s why.

Despite what some people might think teams winning the league on the final day of the season is nothing new. Manchester City overcame neighbours United during the last throws of the 1967/68 campaign and Liverpool pipped QPR to the title on the last day of the 1975/76 season, while Manchester United sealed the first leg of their treble in 1999 with a final day win.

But what makes the final game of the 1988/89 season so special, and worthy of making a film about, was that it was the top two teams in the league, facing each other in the ultimate title decider, with the winner quite literally taking all.

This was before the days of Sky with their relentless 24-hour broadcasting and shameless hype, though if anything that made it all the more dramatic.

The game was actually shown live on ITV on a Friday night, something almost unthinkable at a time of just four terrestrial television channels; but for a matchup of this magnitude that evening’s schedule would be cleared with over 20 million pairs of eyes desperate to see where the league title would end up.

Of course the reason the game was put back so far and played almost two weeks after everyone else had finished their league campaign wasn’t due to TV listings or viewing figures, there was a much more tragic reason than that; namely the worst sporting tragedy ever to take place in this country when Liverpool faced Nottingham Forest in the FA Cup semi-final at Hillsborough on April 15th.

Ninety six Liverpool fans died as a result of a fatal crush at the Leppings Lane end of the ground in Sheffield that day and the club’s next two league games were postponed as the club, its supporters, the football world and the nation came to terms with the huge loss. Understandably it would be another two weeks before Liverpool would play again, as the authorities faced something of a headache when it came to the huge number of games that the club still had to play.

And when football did return to Anfield once more it provided something of a beacon of hope for a community that had suffered so much during the club’s darkest days as Liverpool's impressive form carried on from where it had been so tragically interrupted just a few weeks before.

At Christmas it was Arsenal who looked favourites to win their first title for 18 years as they sat top of the Barclays League Division One table while Liverpool languished some six points off the pace in 6th position – but that was all about to change thanks to an astonishing turnaround dating back to the new year.

From their first game back following the disaster and the eventual title decider showdown on May 26, Liverpool drew one and won four to extend an unbeaten run which began on January 1st, including a 5-1 thrashing of West Ham in their penultimate fixture to really boost their goal difference. Meanwhile, during the same period, Arsenal played just three times and somehow managed to drop five points when they lost to Derby County and drew with Wimbledon.

To make things more intriguing, not only were the two sides separated by just three points going into that last game but the fact they were also neck-and-neck on goal difference meant that a win wouldn’t be enough for the Gunners and only a two goal winning margin would see Arsenal take the title back to the capital on goals scored.

So some two weeks after the FA Cup final a game that was originally meant to be played in April would provide the showpiece for the most enthralling season in history with Liverpool facing Arsenal in the last game of the season in a match that would, one-way-or-another, decide the destination of the Division One championship trophy. 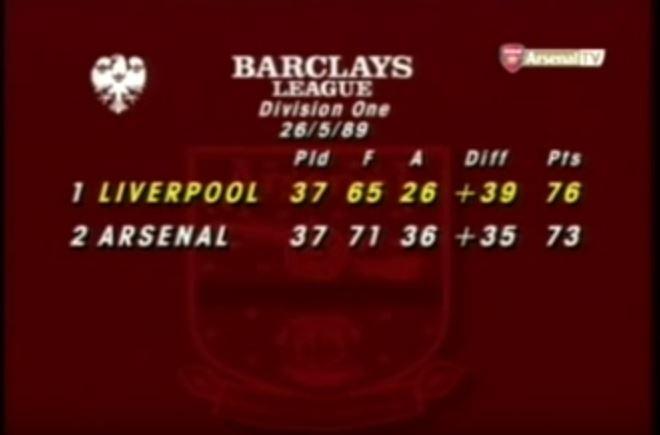 Due to the fact that their last win at Anfield was back in 1975 and Liverpool had been beaten at home by two clear goals for almost three years nobody fancied Arsenal’s chances but former Gunner player and then Manager George Graham had other ideas. “It’s like climbing a mountain really,” he told ITV’s Jim Rosenthal before the game. “Nobody really fancies us outside of Highbury, so we can relax and enjoy the game and hopefully get the goals we need.”

Tactically, Graham was as astute as ever, deciding to play David O’ Leary as a third centre back in a match that they simply had to win. “George came in and said: ‘Listen boys, I really fancy our chances,” Arsenal midfielder Michael Thomas remembered some years later. “I’ve thought about it and David O’Leary will play as a sweeper.’ Everybody was looking at each other, thinking ‘is he mad?’”

The plan worked a treat and Arsenal’s main objective was complete as they got through to half-time without conceding a goal. What’s more on the 52nd minute Alan Smith nodded home the faintest of headers from an indirect free-kick which put the visitors ahead – suddenly there was a chance and as Brian Moore said in his commentary that night: “One more goal will win it for Arsenal.”

Liverpool had their own opportunities to equalise and effectively seal the title as John Barnes and Ray Houghton went close but the longer it remained 1-0 Arsenal knew they would probably have a chance to achieve the unthinkable.

As the clock ran down anxiety around Anfield bordered on a stifled confidence as the faithful started to believe that Liverpool might just have done enough to clinch not only the league title, but also a second league and cup double in three years; the camera even cut to Steve McMahon and John Barnes clasping hands in the centre circle as Kevin Richardson received lengthy treatment for cramp. “One minute,” yelled McMahon to his team-mates.

But deep into time added-on Arsenal did get that one last chance they desperately needed in the most unthinkable way imaginable as John Barnes won the ball deep into the Arsenal half with everyone assuming he would take the ball into the corner to run down the clock; but instead he decided to head towards goal and was easily dispossessed by Richardson, who had only just got up off the floor.

“Arsenal come streaming forward now, in surely what will be their last attack,” said commentator Moore as ‘keeper John Lukic bowled the ball out to Lee Dixon. “A good ball by Dixon, finding Smith,” was how he described the start of what was sure to be Arsenal’s final attempt to get the goal they so desperately needed.

Gathering the ball just inside the Liverpool half Alan Smith was allowed enough space to turn and find the onrushing Michael Thomas. After trying to flick the ball over Steve Nicol, the ball bounced straight back into the midfielder’s path, leaving him with a clear path to Grobbelaar’s goal.

“A good ball by Dixon, finding Smith.” were Moore’s words from the commentary box, his voice going up a number of octaves with excitement. “For Thomas, charging through the midfield! Thomas... It’s up for grabs now...”

Maintaining his cool Thomas steadied himself, in what must have felt like a lifetime for Arsenal fans, before flicking the ball into the far corner of the net just as a number of Liverpool defenders desperately threw themselves at him in an attempt to block his shot or even bring him down.

“An unbelievable climax,” Moore yelled. “The Liverpool players are down, absolutely abject. Aldridge is down, Barnes is down; Dalglish just stands there, Nicol’s on his knees, McMahon’s on his knees.”

Liverpool’s players were shell-shocked. In the last minute of the last game of the most testing of seasons in the club’s history they had seen the league title snatched from their grasp in the most incredible way possible.

At the final whistle the Arsenal players rushed to their supporters in the far corner, while a number attempted to console their stunned opponents; meanwhile George Graham was the epitome of respect, calling for calm and exchanging a handshake with his opposite number Kenny Dalglish as the Kop sportingly stayed back to applaud the newly crowned champions.

In his brilliant commentary that night Brian Moore described what had happened as: “the most dramatic finish in the history of the Football League,” and he was right. Titles have been decided in incredible fashion since and no doubt will be again, but the fact that this was settled on the night, between two opposing teams, and two great rivals of English football makes it all the more special and still the greatest end to a league season, ever.

89 is released on Blu-ray, DVD and on Digital Download from November 20.