Football
News
The club has been through utter turmoil over the past 12 months, and they seem destined for League One
Simon Lillicrap
09:21, 05 Aug 2021

Wayne Rooney surely didn’t imagine his managerial career starting like this. His Derby County side are the biggest shambles in the Football League at the moment, and that takes some doing. His side currently have 13 senior players, are without any centre-backs, and will be relying on youth players to guide them through the opening period of the season.

Rooney himself has been training with the first team to make up the numbers but even that move backfired on the club when he injured Jason Knight in training, ruling the midfielder out for three months. It is a nightmare of epic proportions and, with their opener against Huddersfield now just days away, they are looking certain to prop up the Championhip table come May.

This side is destined for relegation, and it is to Rooney’s credit that he hasn’t scarpered yet.

"If I am being honest, it would be easy for a manager in my situation to walk away,” he told Sky Sports. “It's a challenge for me, I'm a fighter. I am grateful to Derby for giving me this opportunity and I will do everything I can to get the club through this.

"If we can't bring players in over the next two weeks I do not know how we field a team to start the season. I haven't got one centre-back signed to the club, there are two very young players in the under-23s and under-18s. It would be impossible for me to field a team."

His determination is admirable, but his hands are tied. Long-term owner Mel Morris has attempted to sell the club, and agreed sales on two occasions but on both occasions the deals have fallen through, leaving Derby fans frustrated and the current owner unwilling to invest any more money.

This hasn’t come out of the blue either. They won just one of their final 16 league games and only stayed up thanks to a dramatic 3-3 draw on the final day with relegation rivals Sheffield Wednesday in a season that can only be described as shambolic. Talented midfielder Krystian Bielek was unfortunate enough to suffer his second ACL injury, the club were placed under a brief transfer embargo and they only avoided relegation on a technicality - had it not been for the Owls’ six-point deduction the Rams would be playing League One football this season. 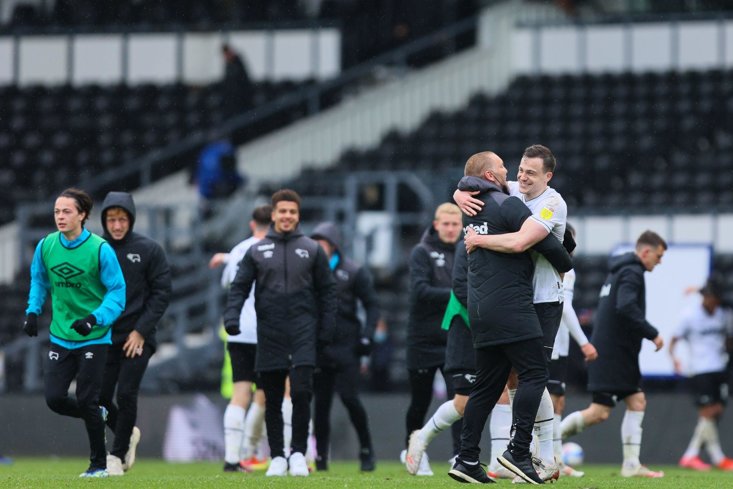 The signing of free agent Colin Kazim-Richards turned out to be an excellent one as the 34-year-old bagged eight goals, but aside from that, there were few positives, especially in an attacking sense. Second top scorer Martyn Waghorn has departed for Coventry City and no other player found the net more than three times across the 46-game season.

“Although you always try to look for the positives, there are few reasons for optimism among Derby fans ahead of our most challenging season in a generation,” says Chris Parsons of the Derby podcast ‘Steve Bloomer’s Washing’.

“Our financial issues and subsequent ongoing embargo have seen last season’s squad significantly weakened, our best player is at least two months away from fitness, and it's still currently unknown if, or when, we'll be able to bring bodies in. Another relegation battle seems almost inevitable. If you offered most Derby fans 21st now, they'd snap your hand off.

“Rooney's decision-making, results (bar a short new manager bounce) and recent behaviour have all been poor and/or unacceptable. He doesn't appear to be a particulary good motivator, and his simplistic tactics got found out about 6 weeks after he became permanent manager. Having said that, nobody deserves the situation he's currently been dealt.

“He's repeatedly asked for reassurances and has towed the line in interviews, but has never had the support he needs and now appears to be at odds with Derby's AWOL ownership. You wouldn't blame him for walking away (if he's not sacked first). I'd be staggered if he's still manager at Christmas.”

A side that were one game away from the Premier League in 2019 under Frank Lampard, with fans that enjoyed the talents of Harry Wilson and Mason Mount, are now destined to play League One football for the first time in 30 years in 12 months' time. The fans certainly don’t deserve this and the lingering air of negativity that now surrounds the club will do the players no favours when they kick off their season on Saturday afternoon.