Roberto Mancini’s Italy stamped their authority as one of the favourites for Euro 2020 with a ruthless display to beat Turkey 3-0.

After dominating the opening half, Italy’s pressure paid off within eight minutes of the restart when Domenico Berardi’s cross was turned in by defender Merih Demiral to give the hosts the lead. It was a cruel twist for the Juventus defender, who had been equal to everything the Italian forward line had thrown at him prior to that.

Things went from bad to worse for the Turks just 10 minutes later, when Ciro Immobile reacted first to a smart save from Uğurcan Çakır to double the Italians’ lead from close range. With 12 minutes left, Lorenzo Insigne got in on the act as he punished a Çakir error to put the icing on the cake and announce his side as a force to be reckoned with over the next month.

Italy, who last lost a game of football in 2018, have been talked about as potential Euro champions in the build-up to this summer, and their performance in Rome will have done little to calm the ambitions of a proud footballing nation.

It is now nine wins without conceding for Mancini’s men, whose typical defensive know-how can offer them a strong foundation for success this summer. 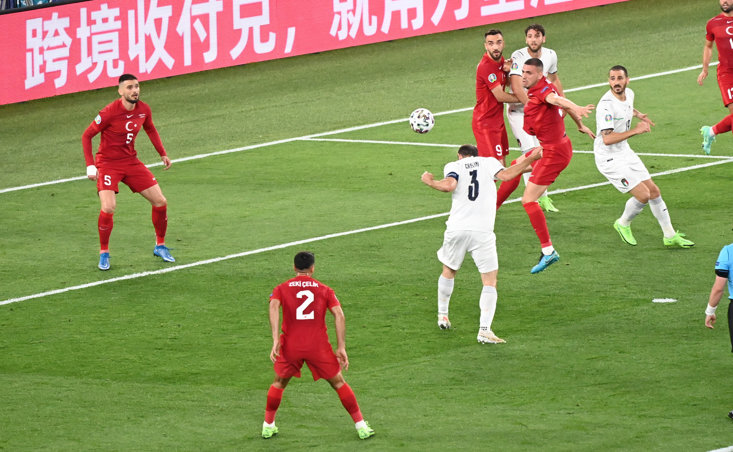 Turkey themselves had been labelled as potential dark horses to go far in the tournament, but it is testament to the organisation of the Italians that they failed to register a single shot in the opening period.

Italy’s 24 shots to Turkey’s one paints an accurate picture of how the game unfolded at the Stadio Olimpico, and in reality, the Azzurri were in control from the opening whistle. Such was the dominance of the hosts in the opening period, their 67% possession in the first half yielded 14 shots.

However, clear-cut chances were few and far between for the group favourites, with Giorgio Chiellini’s arching header acrobatically tipped over the bar by Çakır midway through the first half.

Insigne and Immobile enjoyed decent chances of their own before the break, but Turkey’s stifling tactics seemed to be paying off.

It didn’t take long into the second half for their impressive display to pay dividends, and Turkey’s plot to frustrate their opponents came undone through that unfortunate Demiral own goal, with Italy threatening to make it an embarrassing opening night for their visitors throughout the second half.

Turkey’s first real attempt came two minutes into injury time, with Chiellini’s celebration after his block to protect the clean sheet proof of how much pride his side take in their defensive responsibilities.

A resounding victory on the opening night puts Italy in an enviable position, with Turkey largely believed to be their main Group A rivals.

Encounters with Wales and Switzerland are to follow, and with the Azzurri’s front line as fluid as their defence is ruthless, Mancini will already be plotting his assault on the knockout stages.

If tonight is anything to go by, the rest of Europe should be very wary of a confident Italy.