Legendary Manchester United defender Jaap Stam turns 50 today. While he left the club 20 years ago, his influence is still felt to this day. Almost every Red Devils centre back of note is measured against what Stam brought to the heart of Sir Alex Ferguson’s trusty back line. Some have matched up well with the bald bruiser, such as Serbian powerhouse Nemanja Vidic. Others have found themselves more unfavourably compared with the towering Dutchman, such as under-fire current captain Harry Maguire. But there is a reason Stam is the measuring stick for what makes a United central defender. Because the club has not had another player quite like their Treble-winning defensive rock.

It is impossible to imagine a young Jaap Stam. One of those unique characters who looked like he was already 50 when he was 30, he seems like his 6’3 frame fell to Earth inside an asteroid. But he was, records suggest, actually born in Kampen, Netherlands in 1972. He turned out for local side DOS Kampen as a youth before signing professional forms with FC Zwolle.

Playing into this idea that the statuesque star came into being fully-formed, Stam became a first team regular in the Dutch second division in his first season of professional football. His efforts earned him a move to Eredivisie side SC Cambuur. They were relegated in his first season in the northern city of Leeuwarden, but after sharpening his skills in the second tier he earned a move to Willem II.

His stay with the Superkruiken would be brief after a stunning display in a 1-0 upset win over Ajax caught the eye of PSV Eindhoven. Joining a side that boasted 13 Eredivisie titles at the time was a huge step for the young defender. After completing his second transfer of the season, Stam’s campaign would end with a starting berth as his side won the 1996 KNVB Cup with a 5-2 victory over Sparta Rotterdam.

A team featuring the cream of Dutch footballing talent, such as Phillip Cocu, Boudewijn Zenden and Wim Jonk as well as Stam himself, would lift the Eredivisie title in the following season. While silverware wasn’t forthcoming in the 1997-98 season, the campaign did offer Stam his first taste of Champions League football. It is here that a certain Scot may have got his first look at what Stam had to offer.

Manchester United had come second to Arsenal in the 1997-98 Premier League title race. The Gunners had made matters worse by completing the double, lifting the FA Cup too. As Arsene Wenger’s side looked to pick up steam and turn a huge season into a period of dominance, Ferguson bolstered his ranks. Dwight Yorke was signed from Aston Villa to add goals to an already-potent attack. Winger Jesper Blomqvist was purchased from Parma, while a young starlet by the name of John O’Shea arrived from Irish side Waterford Bohemians. 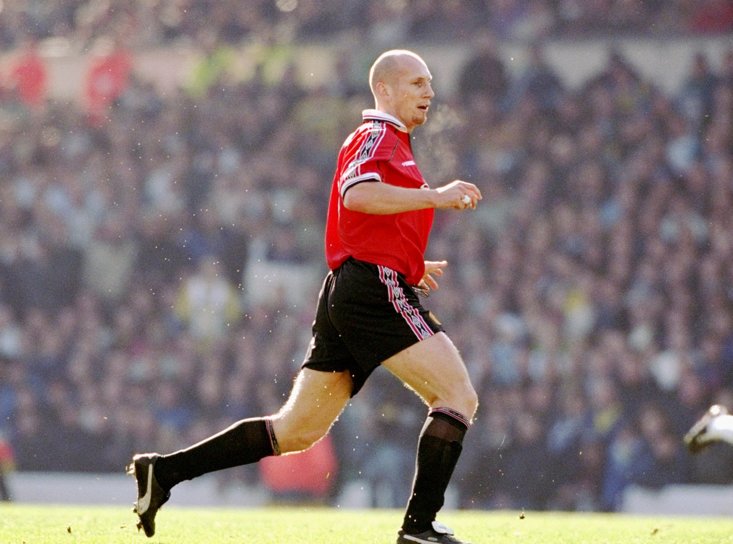 But perhaps the most enduring of all these signings was the world record fee for a defender spent on Jaap Stam. The PSV man was purchased for £10.75 million, an eye-watering sum at the time. But he would be worth every penny. Whether partnering Henning Berg, the ever-adaptable Ronny Johnsen or youngster Wes Brown, Stam was consistently at the heart of the United defence. Great achievements are usually built on the bedrock of a solid defensive partnership, but Stam had to forge several. The fact he did so in the most successful season in United history is astonishing. Stam played in the final of both the FA Cup and Champions League as Ferguson tasted his greatest ever triumph.

More glory would follow as the following season saw Mikael Silvestre signed. The Frenchman would play 30 league games with Stam playing 33, giving the pair ample time to form a cohesive partnership. United would win the league title once again, though they fell short in retaining their Champions League trophy. It would be the last season that United saw Stam at his peak.

An achilles injury limited the towering Dutchman to just 15 league appearances in the following campaign. At the start of the following campaign, Stam was promptly sold to Lazio and replaced with veteran France international Laurent Blanc. Rumours swirled that Ferguson was furious with Stam for comments he made in his autobiography, including hints that the Scotsman had made an illegal approach to sign him while at PSV. The public reason given was that Stam’s tackling numbers had declined and Ferguson was looking to improve his defence. The fact that he was replaced by a 35-year-old player joining his last club suggests potential decline was not the main deciding factor.

The split was a rare occasion of Ferguson showing retrospective contrition. The iconic manager has since called selling Stam a mistake. This admission, and the fact Stam has entered club folklore despite only playing two and a half season’s worth of games in red is testament to the massive impact he had at Old Trafford.

Stam’s time in Rome was partially marred when he was found to have banned substance nandrolone in his system following a Serie A game. His six month ban was reduced to a month and he ended up achieving success in Lazio blue. Stam lifted the Coppa Italia at Le Aquile.

Stam moved to Serie A giants AC Milan in 2004, where he kept a clean sheet as his new club defeated his old one 3-0 in the Supercoppa Italiana. His first season at San Siro ended with Milan’s shocking loss in Istanbul to Liverpool in the Champions League final. After one more season in Italy, Stam made a move that felt highly appropriate for one of the greatest Dutch players of his era as Ajax came calling. It was in Amsterdam that he finished his playing career.

Stam is now a manager, most recently having coached MLS side FC Cincinnati. He returned to British shores in 2016 as manager of Reading and has also managed Feyenoord and former club Zwolle.

But it is as a dominant defender that he is best remembered and when one envisages the hulking Hollander it is in the red of Manchester United. They’ll probably never stop comparing incoming centre backs to Jaap Stam at Old Trafford. That’s because they’ve never had one quite like him since.