Leeds United earned some sweet revenge over West Ham with a 3-2 win away from home against the side that dumped them out of the FA Cup last weekend.

Hat-trick hero Jack Harrison was the star of the show for Marcelo Bielsa’s men who moved up to 15th with the win on 22 points, nine above the relegation zone. David Moyes’ side were looking to make it four wins in a row in the league but were instead dealt with a costly blow to their top four hopes.

The Hammers still remain fourth but are only two points ahead of Arsenal, who have two games in hand, and four points above Spurs, who still have a whopping four games to spare.

The visitors took the lead on the ten minute mark. Raphinha selflessly teed up Mateusz Klich but his effort was parried away by Lukasz Fabianski and found Adam Forshaw. The midfielder was at hand to set up Harrison for his second goal in as many Premier League games.

Despite the early success, Leeds were dealt a double blow as both Forshaw and Luis Firpo were forced off early through injury. The Hammers began to turn up the heat following that rapid double-substitution, and they levelled proceedings through Jarrod Bowen. The in-form forward was picked out by a peach of a corner from Aaron Cresswell to head beyond Illan Meslier. Bowen has now been directly involved in more Premier League goals than any other English player this season (13).

The scores wouldn’t stay level along though, in a thoroughly entertaining first 45 minutes at the London Stadium. Harrison, who hadn’t scored in 15 league appearances before the new year, scored his third goal of 2022 to give Leeds the advantage again when Raphinha's delivery was flicked on by Luke Ayling onto Harrison and into the back of the net. 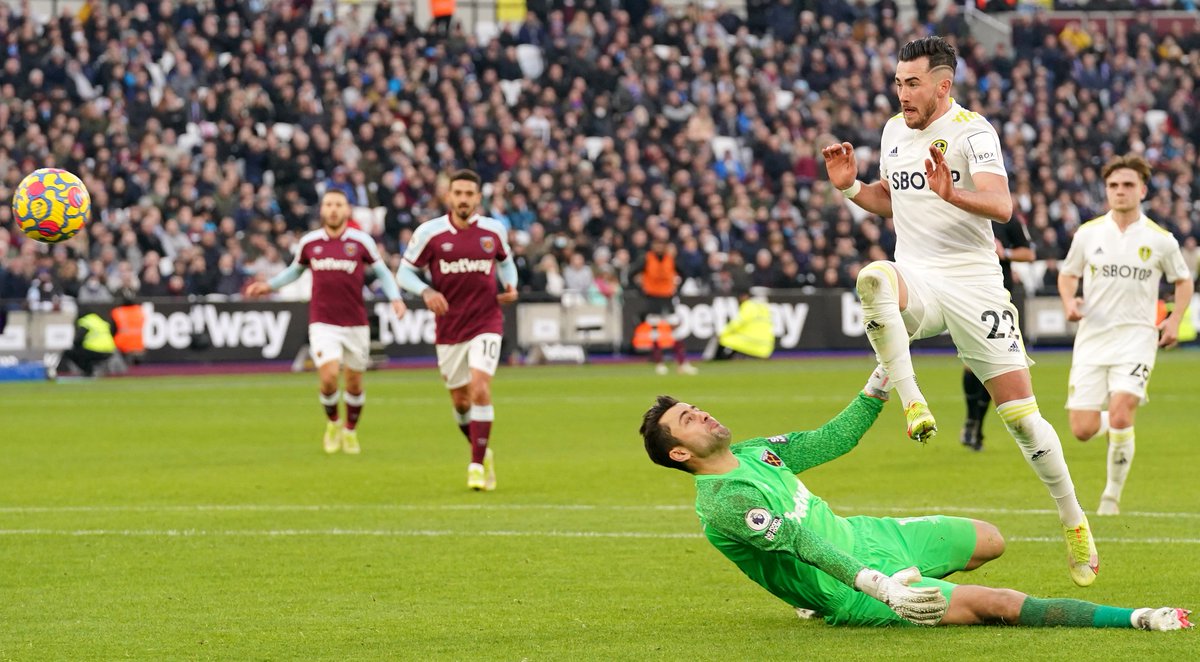 West Ham were back on level terms again after the break through Pablo Fornals. The Spanish forward cut back inside the area and fired a low shot past a rooted Meslier for his third league goal of the season. But Leeds, and particularly Harrison weren’t finished. The winger completed an incredible hat-trick after an inch-perfect pass from Raphinha opened up the West Ham back line and the unmarked Harrison was there to side-foot home.

Klich thought he’d added a fourth for Leeds but it was ruled out by VAR for an offside on Rodrigo.

Elsewhere, Brentford’s first trip to Anfield since 1989 ended in defeat as Liverpool ran out 3-0 winners to move ahead of Chelsea into second in the Premier League table.

Despite their overwhelming domination of the game, Jurgen Klopp’s men had to dig deep to find an opener. The deadlock was finally broken on the cusp of half-time through Fabinho. A Trent Alexander-Arnold corner caused panic in the Bees’ penalty area, and the Brazilian had little problem nodding in a simple header at the back post.

Alex Oxlade-Chamberlain doubled the hosts’ lead after heading in a wonderful pass from Andy Robertson, while birthday boy Takumi Minamino made it three after being set up by Roberto Firmino. The Japanese winger becomes just the fifth player to score a Premier League goal on his birthday and the first since Daniel Sturridge in 2013.

The Reds now sit two points ahead of third-placed Chelsea and 11 behind league-leader Man City, with a game in hand on both. Brentford have now suffered a fourth defeat in five league games but they remain ten points clear of the relegation zone, sitting in 14th.