Snooker
News
The world No.14 has a Ukrainian grandad and has donned the country's flag in previous tournaments
Hector Nunns
09:06, 22 Apr 2022

Jack Lisowski has hit out at snooker’s bosses after being barred from showing support on his waistcoat for war-ravaged Ukraine during his Betfred World Championship matches.

The 30-year-old from Cheltenham, whose grandfather is Ukrainian, has had the national blue and yellow flag sewn onto his waistcoat at recent tournaments, including the Welsh Open and Gibraltar Open events. But ahead of the flagship tournament at the Crucible in Sheffield world No14 Lisowski was told to remove it.

Lisowski, who takes on title favourite Neil Robertson on Saturday, said: “They didn’t let me wear the logo at this tournament. I tried to wear it and they said ‘You can’t wear it unless you are Ukrainian’. I have some Ukrainian in me - that wasn’t enough, and I got my badge taken off my waistcoat.

“I asked [Iulian] Boiko from Ukraine, texted him earlier, asking him for a flag and I’m trying to get one. If I beat Robertson, I will be waving it around. I played two or three tournaments with the badge on and I wanted to wear it, but I am not allowed. It doesn’t make sense to me, and I am trying to reverse it. Everyone in this room would be in agreement and in support of Ukraine. Why the hell can’t I wear it?

“I have Ukrainian family and my grandad was Ukrainian. My dad has been out there. I would have liked to have gone but I cannot go now as it is not safe.

“My grandad is in England now but he came over from there. It is something that is close to my heart and it is very, very sad what is going on obviously. It is a tragedy. It is terrible.”

But Lisowski’s pleas look to have fallen on deaf ears – with World Snooker Tour having no plans to reconsider their decision.

A WST spokesperson said: “As an international sport we have always adopted a policy of political neutrality, and to that end, our policy is to not allow our sport to be used as a political platform at the World Championship.

“We are strongly against the invasion of any sovereign nation and all forms of violence or oppression. Our thoughts and prayers are with the people who are suffering as a result of the current conflict in Ukraine.” 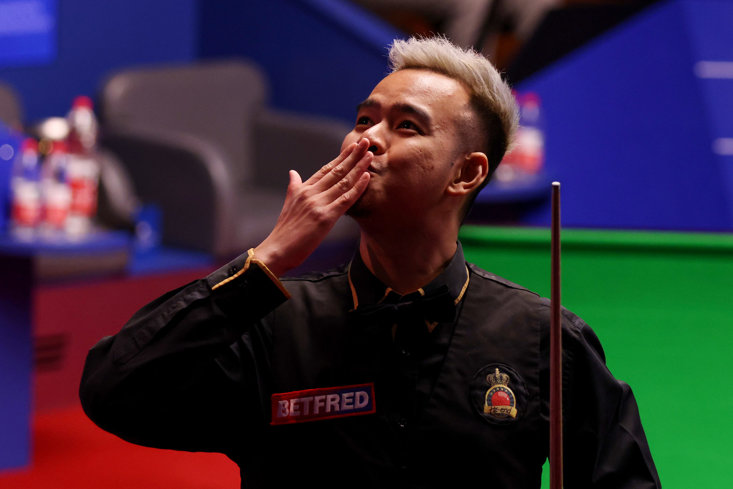 Noppon Saengkham stunned the seeded Luca Brecel to make it a double celebration – after his wife gave birth to a baby girl back home in Thailand.

World No38 Saengkham, 29, beat Belgium’s Brecel 10-5 to set up a last-16 clash with four-time winner John Higgins. And after his first child arrived nearly a month early, he said: “Everything is okay. My wife is staying with my family. They are looking after them both.

“When I woke up I saw the news. I’m so happy. I still haven’t seen her face yet. My daughter is still in hospital. The hospital are just worried about Covid-19 and are protecting everybody. I might see my daughter on Friday. She was born early – by about three or four weeks.

“My wife went to see the doctor and they said she had to be born right now. There were some problems inside. We have called her Believe. I watched the world final and got a little inspiration from Mark Selby. He was 10-4 down and then he said to the camera: ‘Believe, believe, believe.’ And he came back to win the worlds.

“I talk many times with Mark when I see him. I like him, I love his game, and he never gives up. I have learned many things from him.

“I am very happy and excited about what happened today. I was a bit surprised that the match wasn’t a bit closer because Luca has played vert well this season. We were both trying to learn about the table because on Wednesday it was sticky – but on Thursday there was a new cloth.

“I am in the last 16 – so anything can happen now. I have played John three times this season and won two of those. They have been in shorter matches but this is completely different, best-of-25 frames and not best of nine or best of seven.

“I have a good coach, and he has taught me many things about the Crucible and playing here, and I tried to use that to relax and play my best.”