Jake Paul vs Mike Tyson might be a genuine thing, Tyson Fury is still planning to drive off into the sunset after his win over Dillian Whyte and Daniel Dubois has an intriguing heavyweight showdown in the pipeline.

Here are five boxing stories you might have this week…

Jake Paul has responded to claims from Mike Tyson earlier this week suggesting the former heavyweight champion would be interested in a fight with the YouTuber if their fight would break the pay-per-view record.

Speaking to Joe Rogan on his Hotboxin’ podcast, Tyson admitted he’d be willing to face ‘The Problem Child’ in the ring in a bid to break the previous PPV record held by Floyd Mayweather and Manny Pacquiao’s 2015 bout (4.6m).

“Let’s do it Jakey, God wouldn’t that be cool?,” the 55-year-old told Rogan. He then added, “Jake Paul, believe it or not, is more profitable than the champs, this guy probably brings about 80 million people to the table.”

Paul seems keen on a cross-generational showdown and is confident a fight with the Baddest Man On The Planet would come close to breaking a PPV record.

Tyson Fury has doubled down on his claims that he won’t be returning to the boxing ring after his sensational stoppage win over Dillian Whyte at Wembley Stadium last weekend.

Fury stopped the Body Snatcher in six rounds in front of 94,000 on Saturday and, should he hang up his gloves now, the 33-year-old retires with a 32-0-1 (23) record and would join Rocky Marciano, 49-0 (43), as the only other heavyweight champion to retire undefeated. 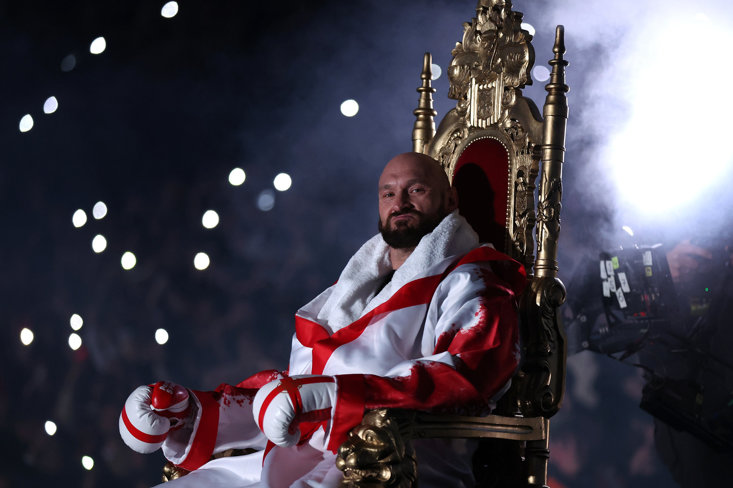 "This is the truth, the gospel truth, nothing but the truth - I'm done," Fury told Piers Morgan Uncensored on Talk TV. "Every good dog has its day and like the great Roman leader said, there will always be somebody else to fight.

"When is enough enough? I'm happy, I'm healthy, I've still got my brains and I can still talk. I've got a beautiful wife, six kids, I've got umpteen belts, plenty of money, success, fame, glory - what more am I doing it for?

"Boxing is a very dangerous sport. You can be taken out with one punch as we've seen on Saturday and it's one unlucky blow and you may not get up off that canvas.

"I'm quitting while I'm ahead, I'm undefeated and only the second man in history to retire as undefeated heavyweight champion. I'm very, very happy, very content in my heart with what I've done and what I've achieved."

Joe Joyce says that his heavyweight contest with former WBO world champion Joseph Parker will likely land on June 2nd and has urged Tyson Fury to postpone his retirement so that he the pair can face each other in the future.

Speaking to Sky Sports, the Juggernaut said,  "I'm back sparring and ready to get back to Las Vegas and back training with a proper solid camp for Parker.

"Both myself and Parker want it; we're both similar, friendly guys but once we get in that ring it's going to be a different story.

Asked whether Fury has more fights ahead of him, the Olympic silver medallist added, "He better have because I want to fight him at one stage. If he wants it, I'm here. 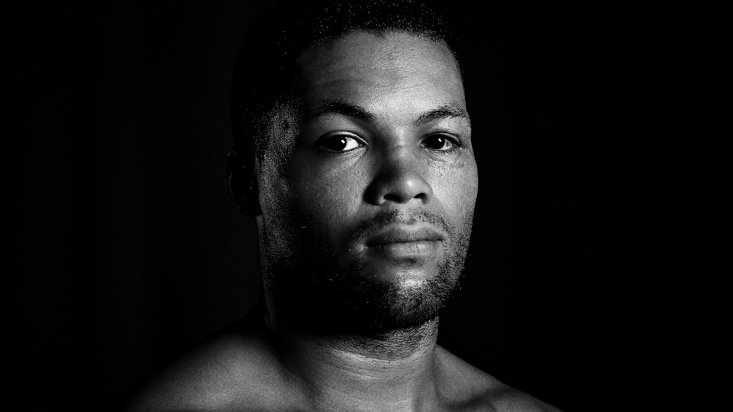 "Sometimes, I guess, Fury can get a bit complacent. I thought maybe Dillian might have a chance to land the overhand right or work the body shots, but [Tyson] stayed switched on and dealt with it.

"You could see his focus and determination; he wasn't taking his eye off the ball. He is so skilled."

In March, Bryan’s promoter Don King outbid Frank Warren’s Queensberry Promotions, who represent Dubois, to stage the fight with an offer of $3,116,001 compared to $2,503,000 from Queensbury.

Unbeaten American Bryan won the vacant WBA strap in January 2021 by stopping former world champion Bermane Stiverne in the 11 rounds, before following it up with a split decision against Jonathan Guidry a year later.

Dubois, 24, has only been beaten once in 18 fights, losing by knockout to Joe Joyce in 2020. ‘DDD’ has won both of his outings since that defeat to his fellow countryman and will be, arguably, the toughest opponent Bryan has ever stepped in with.

Jesse Rodriguez will defend his WBC super flyweight title against Srisaket Sor Rungvisai on a bumper bill of boxing that takes place in his hometown of San Antonio on June 25.

‘Bam’ Rodriguez, 22, makes the first defence of the belt he won by flooring former world titlist Carlos Cuadras in February, becoming the sport’s current youngest champion in the process. First title defences surely don’t get much tougher than Sor Rungvisai though, a two-time former super flyweight champion and pound-for-pound list regular over the years.

“Fighting a guy like Rungvisai is going to bring me to a whole new level,” said Rodriguez. “He's a great fighter but this is my time now. You have to take risks in this sport, that's what special fighters do. They said it was a risk me challenging for a world title fight on short notice and now they say it's a risk taking on a fighter like Rungvisai but this is what I want. These are the types of fights you need so you can be remembered by the fans long after your career is done.”

Elsewhere on a blockbuster night in Texas, Julio Cesar Martinez and McWilliams Arroyo face each other in a rematch of the pair’s 2021 bout for Martinez’s WBC world flyweight title, IBF and WBA world super bantamweight champion Murodjon Akhmadaliev defends his titles against Ronny Rios and undisputed welterweight champion Jessica McCaskill makes the third defence of her titles.

x
Suggested Searches:
The Sportsman
Manchester United
Liverpool
Manchester City
Premier League
More
boxing
Derek Chisora Returns: Five Boxing Stories You Might Have Missed...
Josh Taylor is eyeing an opponent that is not Jack Catterall, ‘Del Boy’ is set for a July [ ... ]
boxing
From Me To You And Then Bilbao: Rhiannon Dixon And James Moorcroft...
They are bickering like an old married couple even before the interview starts – Rhiannon Dixon's [ ... ]
boxing
One More Walk On The Wild Side: Deontay Wilder Might Not Be...
Former WBC heavyweight champion Deontay Wilder will be honoured with a life-size statue in his hometown [ ... ]
boxing
The Boy Who Would Be King: The Time Is Now For David Benavidez
Before his shock defeat at the gloved hands of Dmitry Bivol, there was one fight seemingly the whole [ ... ]
boxing
20 Years On: Remembering Micky Ward And Arturo Gatti's Exhilirating...
The word warrior is thrown around so readily in boxing, it has lost some of its impact. While every [ ... ]
boxing
The Fight Review: New Ali-Foreman Book Sees 'The Rumble' Through...
Some fights are just fights. Wiped away like the blood, sweat and tears that once stained the canvas [ ... ]
boxing
Undisputed No More: Do All Roads Lead To Jack Catterall For...
Josh Taylor has been stripped of the WBA super-lightweight championship. The Scot, who still holds the [ ... ]
boxing
Everything You Need To Know Ahead Of Joshua Buatsi Vs Craig...
We’re going to be treated to a south London derby in the capital this weekend when Joshua Buatsi [ ... ]
boxing
40 Years On From Larry Holmes Vs Gerry Cooney: ''Better In Our...
When a couple of heavyweight legends roll into town to reminisce about a classic fight from decades [ ... ]
boxing
Mike Tyson Charges Dropped: Five Boxing Story You Might Have...
‘Iron’ Mike Tyson can put his aeroplane nightmare behind him, there will be no President [ ... ]
boxing
Canelo Dethroned: Who Is Boxing's New Pound-For-Pound King?
Saul ‘Canelo’ Alvarez’s loss to Dmitry Bivol on Saturday ended not only his nine-year [ ... ]
boxing
Jermell Charlo And Brian Castano Battle To Become 7th Four-Belt...
This Saturday, Jermell Charlo and Brian Castano will fight to crown an undisputed light middleweight [ ... ]
boxing
Bouncing Back: Canelo Can Learn From Great Fighters Who Recovered...
Saul ‘Canelo’ Alvarez’s unanimous decision defeat to Dmitry Bivol last Saturday shocked [ ... ]
boxing
How To Watch The BOXXER Series Cruiserweight Tournament
The BOXXER Series returns this weekend with an eight-man cruiserweight installment. The spiritual successor [ ... ]
boxing
See No Bivol: Where Does Saul 'Canelo' Alvarez Go Next?
This is not the article you were supposed to be reading this Monday morning. Going into his fight with [ ... ]
boxing
Everything You Need To Know As Floyd Mayweather Takes On Former...
Floyd Mayweather returns to the ring this weekend when he takes on former sparring partner “Dangerous” [ ... ]
boxing
Straight Outta Sheffield: Kell Brook's Five Best Performances
Kell Brook is one of the standout British fighters of his era. The former IBF welterweight champion [ ... ]
boxing
Ranking Canelo’s Best Wins Ahead Of His Showdown With Dmitry...
From his professional debut in Mexico as a baby-faced 15-year-old to this weekend’s showdown with [ ... ]
boxing
Canelo Isn't Making History This Time, But Bivol Is A Top Drawer...
The impossible is just what Saul ‘Canelo’ Alvarez does at this point. A 20-0-1 professional [ ... ]
boxing
WBC Push Fury For Retirement Decision: Five Boxing Stories You...
Tyson Fury’s WBC championship future hangs in the balance, Otto Wallin is waiting to pick up the [ ... ]
boxing
Cinco De Mayo: The Storied History Of Boxing's Favourite Holiday
Cinco de Mayo commemorates Mexico’s victory over the French Empire at the Battle of Puebla in [ ... ]
boxing
Great Expectations: Do We Expect Too Much From Saul 'Canelo'...
Saul ‘Canelo’ Alvarez is a victim of his own success. Like those that criticise Manchester [ ... ]
boxing
The Sportsman Boxing Power Rankings: May 2022
The Sportsman Boxing Power Rankings is a monthly series ranking boxers on a number of factors to determine [ ... ]
boxing
Show Of Strength: Historic Fight Weekend Proves Boxing Is In...
Jake Paul was at the centre of another huge boxing event, but this time he was in a suit and tie rather [ ... ]
boxing
Everything You Need To Know About Canelo Alvarez Vs Dmitry Bivol
Fresh from conquering the super-middleweight division, the great Saul ‘Canelo’ Alvarez returns [ ... ]
boxing
Katie Taylor And Shakur Stevenson Shine On An Incredible Night...
From the biggest women’s fight of all time in New York to a sublime performance from Shakur [ ... ]
boxing
Marvin Hagler, Mike Tyson And The Most Intimidating Boxers Of...
Boxing is littered with characters who are the masters of the dark art of intimidation. These fighters [ ... ]
boxing
Natasha Jonas Predicts Winner For Historic Katie Taylor vs Amanda...
This weekend for the first time in history, two women will headline a show at Madison Square Garden. [ ... ]
boxing
Why Women's Boxing Is Better At Making Super-Fights Than The...
The biggest fight of this incredible era of women’s boxing takes place this weekend as Katie Taylor [ ... ]
boxing
Life Through A Lens: Legendary Photographer Neil Leifer On Ali,...
Imagine if you will, Muhammad Ali. Really take a second to picture ‘The Greatest’, the most [ ... ]