Boxing
News
The YouTuber is set to take on former UFC welterweight champion Woodley in his next boxing match
Gary Maiden
13:10, 01 Jun 2021

YouTube sensation Jake Paul is set to fight former UFC star Tyron Woodley in what will be his fourth boxing bout.

Paul, 24, has won all of his three fights to date by way of knockout and is yet to be taken beyond the second round but 'T-Wood' will be his biggest test yet. The controversial star has been stepping up his level of opposition, after stopping fellow “YouTuber” Ali Eson Gib on his debut and dealing with former basketball player Nate Robinson in the same way just ten months later.

Last time out, he stepped up the standard of opposition with his Atlanta bout against former UFC man Ben Askren, rendering the 36-year-old unable to continue with a clubbing right hand. Paul has his critics, but at least now he has turned his attention to actual combat sports stars.

Confidence will be high heading into this next fight, as “The Problem Child” knows that he can mix it with opponents with a background in fighting. So, what can Woodley bring to the ring that Askren couldn't? For a start, he has defended his UFC Welterweight Championship belt as recently as 2018, when he beat Liverpudlian Darren Till via a second round submission.

At 39, Woodley does have 15 years on Paul, which you’d have to argue favours the YouTube star. However, despite being 10 months shy of turning 40, the Missouri man has clearly kept himself in fighting shape. The same couldn’t be said for Askren, who weighed in for his April bout with Paul at 191lb and clearly carrying some excess weight.

Never one to miss an opportunity for a quote, Paul was quick to weigh in (pun very much intended) on his opponent’s physical appearance.

“Look at the guy, he has a beer belly,” Paul quipped. “He clearly didn’t take training camp seriously.”

Askren’s lack of conditioning was apparent from the opening bell and their eight-round clash was waved off after just two minutes. Woodley is an entirely different beast. He has victories on his UFC resume over the likes of Till, Robbie Lawler, Stephen Thompson and Carlos Condit. 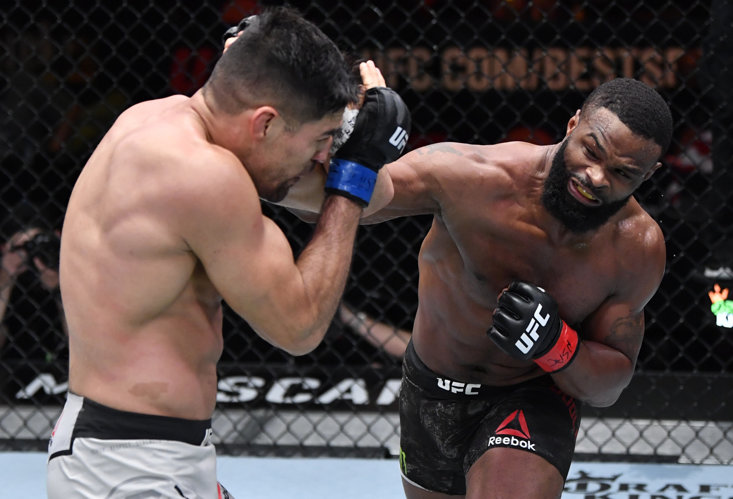 Granted, his last four fights inside the cage ended in defeat, but they were against elite opposition, and Woodley clearly feels he has something to offer inside the squared circle.

The early betting seems to favour Paul, who has opened up as the slight favourite. Sure, this is Woodley’s boxing debut, but the fact that he has enjoyed such a stellar career in a demanding combat sport such as mixed martial arts should stand him in good stead.

Hate him or love him, Paul is making his mark in the sport of boxing, recently retweeting a list that showed him to be closing in on the 100 top-paid athletes on the planet.

Much to the dismay of the hardcore boxing fraternity, Jake isn’t the only Paul brother that is making waves within the sport. Logan Paul faces Floyd Mayweather in Florida on 6th June, with the fellow YouTube influencer looking to improve on his 0-1 record against arguably the greatest fighter of the 21st century.

Forgive the obvious tongue in cheek tone, but it’s very difficult to see a way in which someone without a single win inside the ring can beat a 50-0 boxing legend and self-proclaimed “Best Ever”.

Falling short of praising either of the Paul brothers, they are marketing masters and know exactly how to make the most of an opportunity. Only in today’s times, where viral content is king, would a five-weight world champion agree to a fight a novice without a win on his record.

There’s a market for what they offer, and they’ve capitalised on their unquestionable popularity within the YouTube community. As for Jake Paul, his step up in quality against Woodley is a dangerous one, and could be a step too far at this stage in his career.

One thing is for sure, he will make a noise in the build-up, and the very fact that he has signed a deal with Showtime Boxing suggests that he is here to stay. We better get used to it.