Football
News
Gareth Southgate must now decide who the 26th man in his squad should be
Conor Keane
19:10, 06 Jun 2021

James Ward-Prowse gave an impressive audition in front of Gareth Southgate as he will be fighting for that 26th spot in the Euros squad vacated by the injured Trent Alexander-Arnold.

England won their second consecutive game 1-0 after Marcus Rashford’s penalty ended the home side’s warm-up period with two wins and two clean sheets. Whilst the game itself was not the greatest spectacle, the Southampton midfielder, along with some of his other teammates in the game, showed glimpses of what they could offer in the tournament, especially in tight congested clashes.

When players such as Jack Grealish, Jadon Sancho and Rashford are able to break through a defensive high line and get fouled, there is no one in the England camp with consistent and accurate set-pieces than Ward-Prowse.

The midfielder is well-known for his set-piece abilities and they were called into action a few times at the Riverside Stadium. His pin-point deliveries are what England are crying out for in games where their opponents are going to be difficult to break down.

After a congested season the players will not have been wanting to burn themselves out in friendlies before the Euros but there will be times in the tournament where this season’s busy schedule could catch up with them, especially those who had been involved in European competitions. This could result in some of England’s games lacking the pace needed to punish sides and the need for strong set-pieces should be at the forefront of Southgate’s mind.

In games which will be settled by fine margins, the quality that Ward-Prowse brings to dead ball situations could be significant for England’s hopes of reaching the heights that the World Cup in 2018 brought them.

Southgate’s choice will likely come down to Ward-Prowse or Jesse Lingard but he needs to consider that he has a few options who play in a similar style to Lingard and that when it comes to set-pieces, Ward-Prowse has no equal.

Elsewhere, match-winner Rashford wore the captain’s armband today and his performance merited it as he delivered one of the better performances in a Three Lions shirt after a difficult end to the season for Manchester United. This could be the next stage in his rise and he already appears to have his confidence back. 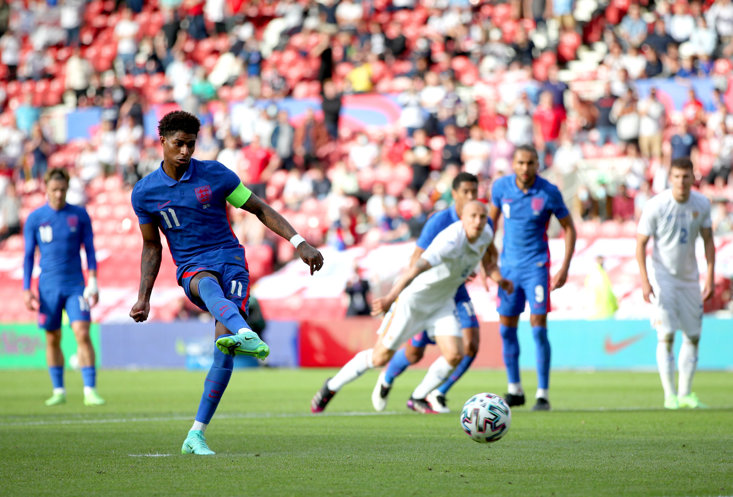 The game was not the brightest but England were given more of a game against Romania than they were against Austria. The visitors had a great chance to open the scoring within the first 10 minutes after a drilled pass in from the left by Camora found Razvan Marin at the edge of the area but his tame effort was comfortable for Sam Johnstone.

Moments later, Sancho had a chance to score but scuffed his effort over the bar. Grealish, Luke Shaw and Rashford were linking up well early one and seemed to be England’s best way of making progress in Romania’s half. Johnstone on his debut shone throughout and was called into action again to deny a half volley from the edge of the area.

At the other end Dominic Calvert-Lewin came close to breaking the deadlock when he rattled the crossbar from an excellent free-kick by that man Ward-Prowse. The bar was given a second beating by a curling effort from Sancho seemingly looked destined to nestle in the far corner of the Romanian goal as England pressed for the opener.

Romania came close at the end of the half with Johnstone once again forced to make another smart stop to keep the score level. Ben Godfrey went close early in the second-half after meeting another good Ward-Prowse free-kick but Florin Nita was able to collect it.  The deadlock was finally broken when Grealish was brought down after an impressive run into the penalty area before Rashford coolly slotted home to give the hosts the lead.

Johnstone pulled off an amazing save minutes later to keep England ahead as he denied Andrei Ivan’s vicious drive. His performance was exceptional and although Jordan Pickford will be England's number one, Johnstone's performance puts him in great shape to be his understudy.

England were awarded another penalty after Calvert-Lewin was brought down and substitute Jordan Henderson stepped up to take it but Nita parried his effort away. Fellow substitute Jude Bellingham almost scored his first senior England goal after his header at the far post ricocheted off of Vlad Chiriches’ boot, but England will go into Euro 2020 on the back of two 1-0 wins.

Southgate is likely to name his 26th man over the coming days, with JWP now the front-runner to make it into the squad. The real stuff begins on Sunday.