Snooker
News
The Welshman knocked Stephen Maguire out in the first-round with a 10-4 victory
Kieran Spratt
12:30, 19 Apr 2021

The first of the seeds has fallen at the Betfred World Snooker Championships, and it was at the hands of Welshman Jamie Jones, who says he is proud of his comeback season on the Main Tour after beating Stephen Maguire 10-4 in the first round on Sunday.

Less than a year ago, Jones was at Q School trying to regain the tour card he lost in 2018, following a suspension for failing to report his knowledge of match fixing to the authorities.

“I have said in interviews all season how proud I am of myself,” Jones said in his post-match press conference.

“I felt like I lost everything, but if anyone is struggling with anything then I think it’s important to talk to people, which I did, and make positive choices, which I did.”

“It is easier said than done – it is so easy to make the wrong choices – but maybe I’m a little bit of proof how making good choices can work out for people.

The Welsh Warrior, a quarter-finalist at the Crucible nine years ago, lost the opening three frames to Maguire, who has now had eight early exits in the last eleven instalments of the World Championship, but proceeded to win ten out of the next eleven for a comfortable victory. 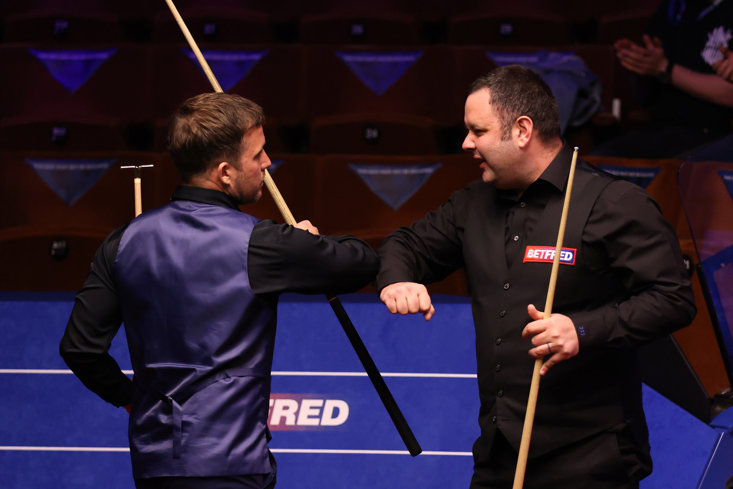 “You can’t even compare players [Jones as a quarter-finalist in 2012 and Jones now], I’ve always had an eye for a pot which is probably all I had back then.

“I’m a much more rounded player now. I said to my mate at the interval when I was 9-4 up, ‘I’m not going to get ahead of myself and I’m just going to make it difficult for him.’

“In the past maybe I would have reached for the line, but I was prepared to wait and I think that just comes with experience.

“I don’t feel as much pressure as the qualifiers – maybe the expectation isn’t as much or something so I can just really enjoy the experience.

Jones' World Championship performances so far, which includes three wins in the qualifying rounds, will see him make a return to the top 64 in the official world rankings standings. He now moves on to round two where he’ll play either Ding Junhui or Stuart Bingham.