Football
News
Vardy has more goals than Drogba in the Premier League, which has sparked a debate online
Simon Lillicrap
17:00, 22 Jun 2022

There’s been a football argument that has gripped social media. Who is/was the better Premier League striker, Jamie Vardy or Didier Drogba? It’s an argument that has split opinion in The Sportsman office so here’s both sides of the debate. We’ll let you make the final call.

Kris Voakes - The case for Vardy

What Didier Drogba did for Chelsea Football Club was historic. In his first spell at Stamford Bridge he scored 157 goals and was the rock around which the Blues built a winning machine. Three Premier League titles, four FA Cups, a Champions League win and three League Cups… the silverware basically dripped off him.

But what Jamie Vardy has achieved at Leicester City is of far greater consequence to the Foxes than Drogba himself was able to do at Chelsea. The former England man wasn’t even a top-flight player until he was 27 and yet he has racked up 133 goals in the Premier League alone, breaching the 20 mark three times – once more than Drogba managed – in the last seven years.

And look at the comparative support casts the pair have had around them. Drogba was part of a £150 million summer spree in 2004 which followed a £153m influx the year before as the Roman Abramovich era sent them straight to the front of the queue at football’s glitziest shops. Damien Duff, Arjen Robben, Michael Essien, John Obi Mikel, Ashley Cole, Salomon Kalou, Michael Ballack, Florent Malouda… the list of star players who had been signed to service a team built around Drogba was seemingly endless.

Who did Jamie Vardy win a Premier League with at Leicester in comparison? A £28.8m squad featuring Shinji Okazaki, Leonardo Ulloa, Danny Drinkwater, Marc Albrighton and Demarai Gray. Sure, they had Riyad Mahrez and Ngolo Kante, but both had been added on the cheap and were destined to leave for other clubs before long. Would Drogba have led Leicester to a league title with those resources around him? Maybe not. And would he have continued to thrive in the following seasons even as those title-winners drifted away? Again, you wouldn’t bet on it. 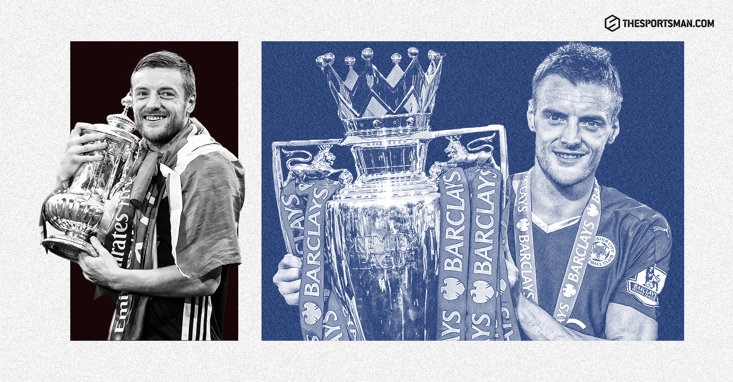 Vardy has won the Premier League and FA Cup

Drogba was undoubtedly a class act as a Chelsea player, but he benefited early on from the rarity that was having a manager (Jose Mourinho) ready to build an expensive unit around the qualities of one dominant striker. One league title and an FA Cup win might not seem like a lot to a Chelsea fan, but to Leicester City supporters it makes Jamie Vardy absolutely untouchable in the pantheon of great Premier League goal-getters.

Simon Lillicrap - The case for Drogba

This shouldn’t even be a debate. Have people all of a sudden forgotten how good Didier Drogba was? The Ivorian was Jose Mouriho’s kingpin and the man that Premier League defences simply could not handle. Premier League defences, by the way, were much better than they are in this day and age when full-backs are never in position and centre-backs are better at passing than defending.

He bullied Nemanja Vidic and Rio Ferdinand. He destroyed Sol Campbell. He took apart some of Europe’s best back-lines and he knocked Arsenal’s Invincibles off their perch in his very first season in English football.

Now I love Jamie Vardy, who has squeezed out every ounce of potential from his career and scored more Premier League goals than Drogba in fewer games, but the Ivorian was a colossus of the English game. Four Premier League titles, four FA Cups, three League Cups - oh and that Champions League that he won almost single handedly. 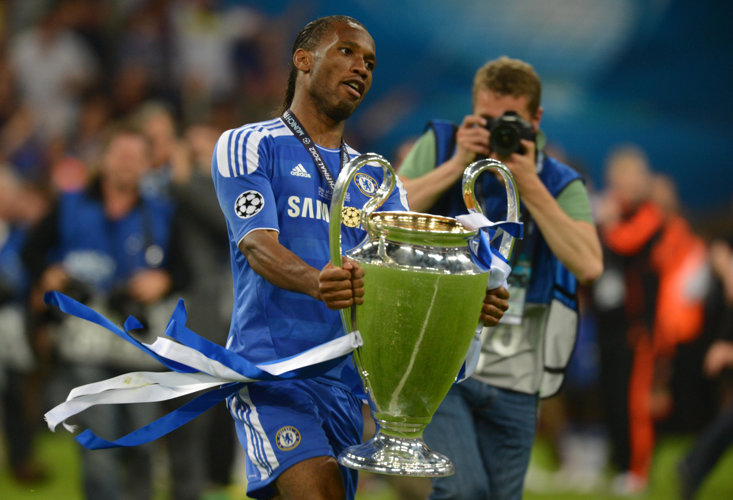 Drogba with the Champions League 2012

In total he played in ten finals for Chelsea and scored nine goals in those games. When it really mattered Drogba delivered and he also did it away from league football. Chelsea were underdogs at almost every stage of the 2012 Champions League run, yet Drogba delivered in the final in the most sensational way.

On the international stage, which Vardy barely touched, he won African Footballer of the Year twice, and was named in the AFCON team of the tournament on three separate occasions. Of course he has played with better players than Vardy, he was a better player. End of discussion.

Chelsea 16/1 to win Premier League
x
Suggested Searches:
The Sportsman
Manchester United
Liverpool
Manchester City
Premier League
More
football
Theatre Of Dreams Lives Up To Its Name As England Get Euro 2022...
England secured a 1-0 win over Austria in the Euro 2022 opener in Manchester, as Beth Mead scored the [ ... ]
football
Miedema And Martens Are The Stars To Watch In Euro 2022 Group...
30 years on from Denmark’s surprise Euro ‘92 success, could we see another late arrival [ ... ]
football
Football's Last Maverick: You'll Miss Zlatan Ibrahimovic When...
Zlatan Ibrahimovic isn’t going anywhere. Not for another year at least. But as the Swedish striker [ ... ]
football
The Top Performing Players At Each Premier League Club Last...
The off season in football provides a much-needed warm down ahead of the new campaign and many supporters [ ... ]
football
Why Are Chelsea Holding Marcos Alonso Hostage?
When you think of footballers who might be held to ransom by their club in the summer transfer window [ ... ]
football
National League Fixtures: Oldham Travel To Torquay On Opening...
The National League fixtures have finally been released as we are just weeks away from the beginning [ ... ]
football
Transfer News: Eriksen, Sinisterra & Aribo Set To Move
It's Wednesday, and most Premier League clubs have gotten their pre-season agenda well underway [ ... ]
football
Putellas, Popp And Pernille: The Perfect 'P's Set To Pulverise...
Group A at Euro 2022 features a heavy favourite on home soil, but Group B is a smorgasbord of eclectic [ ... ]
football
The Relaxed Rebuild: Leeds United Are Trusting Jesse Marsch...
Leeds United need a massive rebuild this summer. It’s a fact that has gone underreported, despite [ ... ]
football
Ronaldo Be Warned: Chelsea Don't Excel At Signing Strikers
Chelsea are reportedly circling Manchester United striker Cristiano Ronaldo. While it is no surprise [ ... ]
football
Mauricio Pochettino Axed By PSG, Christophe Galtier Expected...
Following months of uncertainty around his role at the club, manager Mauricio Pochettino has been sacked [ ... ]
football
Transfer News: Cristiano Ronaldo Latest And Euro 2022 Build-Up
The circus around Cristiano Ronaldo's next club continues, if indeed he does leave Manchester United, [ ... ]
football
1,000 Fans, Sexism And Part-Timers: Euro 2005 Wasn't Pretty...
England is hosting the Women’s European Championships again. 17 years after Euro 2005 took place [ ... ]
football
40 Years On: How Paolo Rossi's Redemption Downed Brilliant Brazil
Utter the name Paolo Rossi and there is one game everybody immediately thinks of. It remains one of [ ... ]
football
Hemp, Hegerberg And Bronze: The Euro 2022 Stars Set To Light...
We are now just days away from the opening match of Euro 2022 and excitement is at fever pitch for the [ ... ]
football
Eriksen Joining And Ronaldo Leaving Heralds The Era Of The Selfless...
The unforgiving maelstrom of the transfer window giveth and it taketh away. Manchester United fans are [ ... ]
football
Carlton Cole On His Scottish Adventure: 'I Always Wanted To...
Former West Ham United and England striker Carlton Cole is set to don the boots again as Masters Football [ ... ]
football
QPR Boss Michael Beale Praises Aston Villa's Euro-Winning England...
As Aaron Ramsey added the goal in extra-time to confirm England’s U19s as champions of Europe [ ... ]
football
Palermo & Me: Why The City Group Takeover Has Lost The Rosanero...
If we were to get chatting about football and you asked who I support, I would tell you Sheffield Wednesday. [ ... ]
football
Transfer News: Arsenal Confirm Gabriel Jesus Signing From Man...
Gabriel Jesus is officially a Gooner! Arsenal confirmed their latest signing from Manchester City this [ ... ]
football
Euro 2022 Betting Preview: Sarina Wiegman's England Can Bring...
Euro 2022 is now just two days away as England prepare to take on Austria at a sold-out Old Trafford [ ... ]
football
Transfer News: Cristiano Ronaldo Requests Man Utd Exit
It's Sunday and the transfer window is in full swing as clubs can now confirm signings that they [ ... ]
football
CR7 Eyes Old Trafford Exit: Where Next For Manchester United's...
Cristiano Ronaldo has reportedly made clear his intention to leave Manchester United, should an “acceptable” [ ... ]
football
Football Is Already In An Unofficial Golden Goal Era, So Let's...
As we enter the second half of the year that will feature two major international tournaments, that [ ... ]
football
Rangers And Scotland Legend Andy Goram Passes Away At The Age...
Rangers and Scotland legend Andy Goram has passed away from cancer at the age of 58. The goalkeeper [ ... ]
football
Transfer Blog: Henderson And Tarkowski Complete PL Moves
Good afternoon football fans,  We've got two deals confirmed already with the arrivals of Dean [ ... ]
football
Fantasy Premier League Prices Revealed - How Much Are Haaland...
Fantasy Premier League is just around the corner once again and with the new season just over a month [ ... ]
football
England's U19 Win European Championship Final Inspired By Aston...
England have won another youth tournament as their under-19s defeated Israel 3-1 in the European Championship [ ... ]
football
Mohamed Salah Signs New Three-Year Deal With Liverpool
Mohamed Salah has put an end to the speculation surrounding his future by signing a new three-year contract [ ... ]
football
Leeds Exodus Raises Concerns Over Continued Post-Bielsa Slump
Less than five weeks since the final episode in the great escape and Leeds fans are having to draw breath [ ... ]