Rugby
News
Fantastic display to beat the Irish means the hosts are in the driving seat
John Davidson
13:02, 30 Sep 2019

They say lightning never strikes in the same place twice. Well somebody forgot to tell Japan.
The hosts of the 2019 Rugby World Cup pulled off the biggest upset of the tournament so far when they beat Ireland 19-12 on Saturday.

In 2015 the Brave Blossoms edged superpowers South Africa in a match that sent shockwaves around the sporting world. Four years on they have done the same, defeating the Irish – ranked number four in the world - by seven points in a dazzling display.

It was a well-deserved result for Japan in Shizuoka because of their dynamic and entertaining style of play. They attacked with speed and verve, moving the ball freely and playing with tenacity and passion in defence. It was a committed performance, full of creativity and power, that stunned the Irish.

Ireland were too conservative, too predictable and basic in their play. They kicked too much ball away and didn’t ask Japan enough questions in defence.

Now Japan have a real chance of reaching the quarter-finals. It also puts the big nations, those at the top of world rugby – New Zealand, England, South Africa, France, Wales and Australia – on notice.

Don’t play your best, don’t compete for the full 80 minutes against the so-called ‘lesser’ countries, and you will get beat. The gap is closing in world rugby, and fast. And this is not only good for this World Cup, but for the future of the sport. Unpredictable upsets and shocks are what attract new fans and keep rusted-on supporters excited. 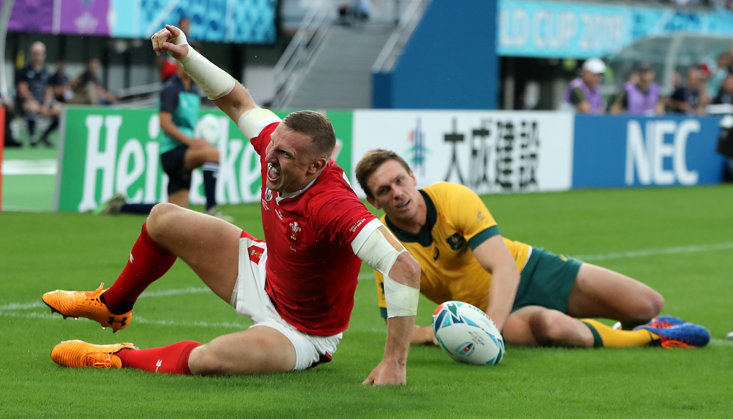 On Sunday viewers were treated to another engaging and enthralling contest, although the result was nowhere near as shocking or surprising.

Wales held on to defeat Australia in an epic encounter in Tokyo. The Welsh started like a house on fire, building a 23-8 half-time lead, but the Wallabies stormed back to almost steal the win.

It was a game that had a bit of everything – brilliant skill, tries, big hits, drop-goals, strong defence and a touch of controversy. The result was right in the balance up until full-time.

Wales and Australia have had some ding-dog battles over the years and this was another one. Warren Gatland’s men had World Cup history against them, but they showed that they mean business in Japan and are out to go all the way.

Wales have never reached a World Cup final, let alone win one, but that could all be about to change in the weeks ahead.

For the Wallabies it means they have to win their remaining pool games and they could now face England, their old enemies, in the quarter-finals. That would be a huge blockbuster.

For Ireland, their World Cup is not over but they can afford no more slip-ups, no more embarrassments. They could still finish top in their pool, but they will rely on other results. How Japan perform against Scotland will be crucial. If the hosts win, then they will head the group.

Ireland could now end up facing the world-champion All Blacks in the next round. Talk about a wake-up call. Now is the chance for the Irish to show what they’re really made of.