Football
News
The Argentine made quite the impact in the Premier League
Simon Lillicrap
10:00, 05 Mar 2022

The chat that rang around the Kop 15 years ago was one of tribute to a midfield that took them to the 2007 Champions League final. But despite Steven Gerrard’s legendary status and Alonso’s undoubted brilliance, for many Reds, it is Javier Mascherano that holds a unique place in their heart.

Liverpool host West Ham United as they attempt to keep their Premier League title hopes alive, and both teams are closely affiliated with the Argentine, who just knew how to win fans over on the red side of Merseyside. His time in England started in unusual circumstances though, as West Ham pulled off what would be one of the most controversial transfers in history.

With Real Madrid and Barcelona circling, the 22-year-old that had shone at the 2006 World Cup was the hottest property in Europe. All of the top clubs had their name in the hat to sign him, so when he rocked up at Alan Pardew’s West Ham alongside compatriot Carlos Tevez, it's fair to say a few eyebrows were raised as ExWHUEmployee on Twitter tells The Sportsman:

"The double signing of Javier Mascherano and Carlos Tevez was one of the most exciting days in our transfer history. It took both players a while to settle but you could clearly see their qualities. Javier was unable to dislodge the consistent Hayden Mullins from the side and whilst Hayden was a good player for us, looking back this seems surreal. Sadly he was moved on before he really did a think for the club as is probably best remembered for being bit by former forward Jermain Defoe at White Hart Lane"

By February, after just five appearances, he was out of the door. Mascherano was owned by a third-party rather than West Ham and he made just five appearances for the Hammers before departing in unceremonious circumstances. Despite the teams continued struggles as they battled against relegation, Mascherano barely featured, which led many to believe that he contract featured several performance based bonuses that the club simply couldn’t afford.

The situation was so grim that in October 2006, then Argentinian head coach Alfio Basile stated he wanted Mascherano to leave the club as soon as possible, adding: "I hope for God's sake that Mascherano can go to Juventus.”

He would depart, but not to Turin. In January, Liverpool agreed a loan move for the Argentine and by mid-February, the Premier League had sanctioned the deal. The move would become permanent a year later, but by that point, he had already won the hearts of both his Liverpool teammates, and those in the stands. 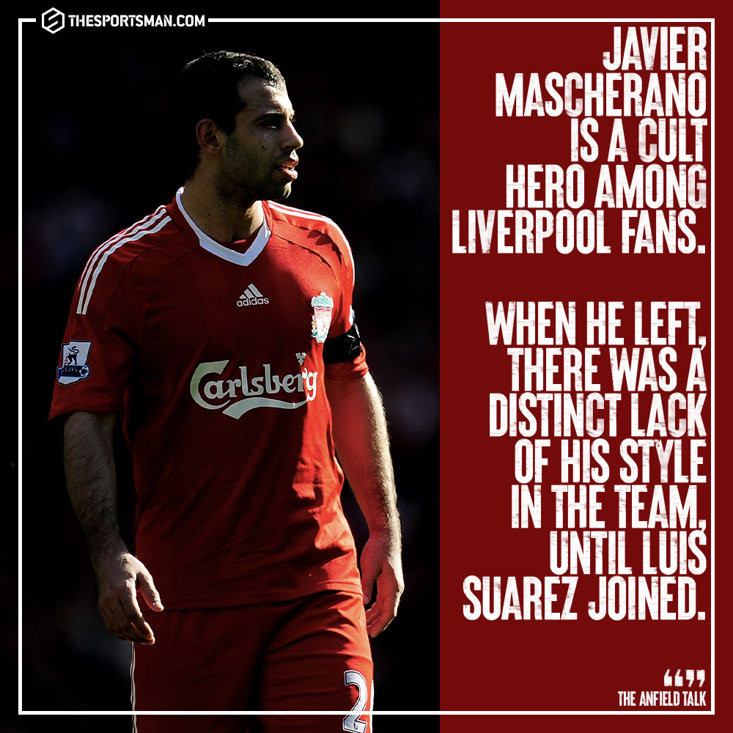 "Javier Mascherano is a cult hero among Liverpool fans,” The Anfield Talk told The Sportsman.

“The Argentine midfielder established himself as a vital part of a midfield that nearly did special things in the Premier League and in Europe. Mascherano loved a good yellow card during his time with Liverpool and his rugged style quickly made him a fan favourite - for his dogged performances in the midfield alongside the likes of Xabi Alonso and Harry Kewell. When he left, there was a distinct lack of his style in the team and we needed more of that through the early 2010s, up until Luis Suarez joined, that is."

Manager Rafa Benitez called him a “monster of a player” and he was consistently praised by his fellow midfielders Gerrard and Alonso as Liverpool almost pipped Manchester United to the Premier League title in 2009. Despite the lack of a major title at Anfield, he was hugely appreciated on and off the pitch.

Fans simply love to see a player give absolutely everything. An all-action midfielder that wore his heart on his sleeve and was not afraid to get stuck in, Mascherano fit that bill perfectly. That desire to win is perhaps typified by the fact that he ripped his anus in the 2014 World Cup semi-final as he blocked a shot from Arjen Robben. Now that is putting your body on the line for the cause.

His departure from Liverpool to Barcelona, his dream destination, was unfortunate for the Reds, but Mascherano joined arguably the greatest team the world has ever seen - and reinvented himself. Sergio Busquets had the midfield sh*thouse role locked down in Catalunya, so the Argentine instead became a centre-back that had an immense passing range.

He became a crucial part of that team once Carles Puyol had called it a day and started both the 2011 and 2015 Champions League Finals alongside Gerard Pique. Liverpool couldn’t give him that European glory, but their fans will have shared a smile as he got his hands on club football’s biggest prize - twice.

A Liverpool cult hero, a World Cup finalist with a ripped anus, and a two-time Champions League winner involved in one of the most controversial transfers of all time with Alan Pardew. Now that’s what I call a football career.