Jesse Lingard is on fire right now. Spearheading West Ham’s pursuit of the top four, he is the man of the moment and just can’t stop scoring. Against Leicester on Sunday, the playmaker, who is on loan from Manchester United, netted a first-half brace in a 3-2 victory which fired the Hammers back above Chelsea and Liverpool and just a point off the Foxes in third.

David Moyes’ side are plotting Champions League qualification and all of the talk has been about clinching that fourth and final spot but, with seven games remaining, third place is now within real reach. Their rise has been about hitting teams hard and quickly. Racing into a three-goal lead before half-time earned them four points against Arsenal and Wolves and here, Lingard’s double put them two up at half-time.

The first goal was a great team move completed by a stunning first-time finish. Arthur Masuaku jinked his way down the left cleverly and his ball into the box made its way to Vladimir Coufal who cut it back for Lingard who stood on the edge of the box, arched his body to welly it home first time.

A minute before the break, the 28-year-old doubled his tally and West Ham’s advantage. It was Coufal again who hit a long, searching ball for Jarrod Bowen to race onto who squared the ball to Lingard to tap into an empty net after Leicester goalkeeper Kasper Schmeichel had been drawn out and the away side’s defence had nodded off.

Bowen then turned scorer himself on 48 minutes, drilling the ball home following Tomas Soucek’s silky pass in the area. West Ham were three goals up for the third successive game.

Kelechi Iheanacho, Leicester's own man of the moment, grabbed his eighth goal in six games on 70 minutes with a rocket of a strike past Lukasz Fabianski. Captain Mark Noble later put his body on the line to block a Youri Tielemans effort and it proved vital for Ihenacho notched another in injury time. It proved another nervy end but West Ham held on for a deserved three points. 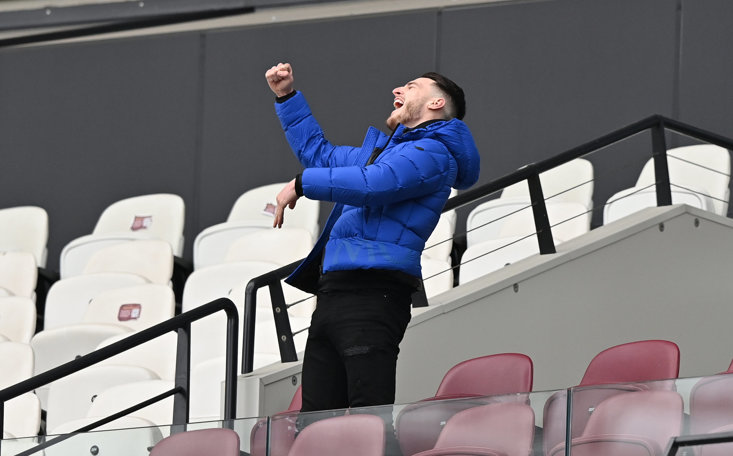 Lingard’s quality has always been there to see but perhaps being the big fish in a smaller pond, away from the glare and pressures at Old Trafford, is what he really needed to thrive this season. Since make his Hammers debut on February 3, the midfielder has been directly involved in more goals than any other player in the Premier League, having found the net seven times – the same as Harry Kane – and setting up another three. This was another talismanic performance.

Should this purple patch earn Lingard a place in Gareth Southgate’s England squad for the Euros, it would be fully deserved, as would a place in Europe for West Ham.

Under Moyes, the East End team are well-drilled and organised. Though perhaps just as importantly, there seems to be a real togetherness within the West Ham camp this season; they are enjoying the momentum they have created and are battling for each other.

Declan Rice, sidelined through injury and watching from the stands, was clearly delighted for his teammates and was seen punching the air, beaming from ear to ear as he applauded another goal. “This is what it means!!” he tweeted at half-time.

Centre-back Issa Diop thought he had notched a fourth, but it was ruled out by VAR for offside.

Despite another victory, Moyes had a word of caution for his players and said after the game, "I’m not smiling. This one is a stick-on smile today. This is a smile of anger because we nearly threw away another big three points for us and we don’t want to do that.

While West Ham got the job done in the end, this was a concerning display for Leicester, who will be desperate to avoid a repeat of last season when they dropped out of the Champions League places on the final day of the season. On this evidence, along with Chelsea and Liverpool all winning this weekend, it could be sooner. They have an FA Cup semi-final appearance to focus on next week but then must defeat West Brom and Crystal Palace when they visit the King Power stadium within five days of each other heading into the end of April.

For West Ham, it seems three is the magic number and they will now feel confident they can nab the third spot.