Sports
News
Naomi Osaka will attempt to follow these icons in Japan, but she won't have a home crowd to cheer her on
Conor Keane
10:05, 21 Jul 2021

The Tokyo Olympic Games is fast approaching and the eyes of the world will be on the Games that will go down in history as the one that did not have a crowd. While the athletes will be gutted that they have to compete behind closed doors, the lack of eyes inside the venues could provide an advantage in terms of lack of background noise to allow peak performance.

Japan’s athletes will be particularly devastated as they would have dreamed of performing in front of a home crowd at the Olympics, especially those who have a strong chance of a homeland hero like there have been in many of the Games that have preceded. Here are some of the homeland heroes that have brought pride and joy to their respective nations when hosting the Olympics.

The sprinter came into the Games hosted in the United States as an already established Olympic gold medallist, having been a part of the Barcelona 1992 4x400m relay team – so he knew what was demanded of athletes who wish to win the gold.

In June 1996, at 28 years of age, Johnson ran the 200m in 19.66 seconds at the US Olympic trials, breaking Pietro Mennea’s record of 19.72 seconds which had stood for 17 years. At the Olympic finals, Johnson easily captured the 400m gold medal with an Olympic record time of 43.49 seconds, 0.92 seconds quicker than Great Britain’s Roger Black. He amazed again when he claimed the 200m title with a world record time of 19.32 seconds, now that is how you deal with the pressure of performing in front of your home crowd.

Freeman had the honour of lighting the torch for the Games, which showed how she was one of Australia’s main hopes for a gold medal and to be their homeland hero. She was the clear favourite for the 400m in her home Games in Sydney, where she was expected to face her rival Marie-Jose Perec, which never happened due to Perec leaving the Games after claiming harassment from strangers. Without her main rival to challenge her, Freeman won the Olympic title in a time of 49.11 seconds, becoming only the second Australian Aboriginal Olympic champion. After the race she took a victory lap where she carried both the Aboriginal and Australian flags. 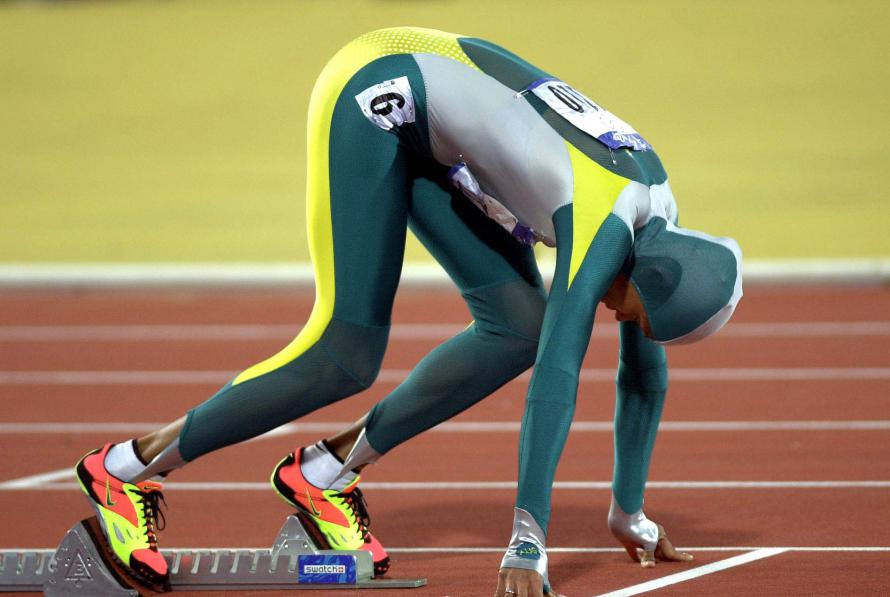 Part of Great Britain’s ‘Super Saturday’, Ennis-Hill won one of Team GB’s gold medals in the same day as she became Olympic champion in the Heptathlon – setting a record British and Commonwealth score of 6,955 points, 306 points clear of silver medallist Lilli Schwarzkopf. Ennis-Hill’s score on the first day was 4,158 points, which was her highest ever. She set two personal bests that day: 12.54 seconds in the 100m hurdles and 22.83 seconds in the 200m. Her time in the 10m hurdles was a new British record and also the fastest time ever recorded in a heptathlon while she also recorded another personal best of 47.49 metres in the javelin. Pressure makes diamonds.

The famous Brazilian footballer was tasked with inspiring Brazil to the Olympic gold in Rio and the attacker did not shy away from the challenge. He was one of the three over-23 players selected for the tournament and manager Rogerio Micale named him as his captain. In Brazil’s quarter-final clash with Colombia, Neymar scored the first goal and assisted the second as they won 2-0. In the semi-final against Honduras, Neymar scored a brace where he scored the first and last goals in a 6-0 thrashing. 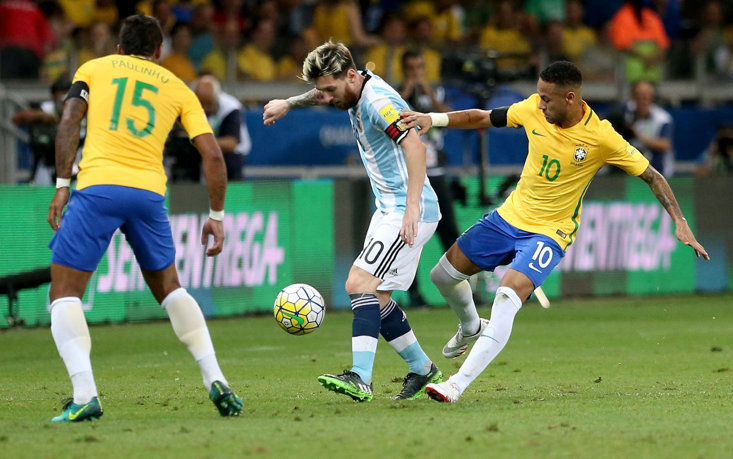 Neymar opened the scoring in the final against Germany at the Maracana with a sublime free-kick. As the game ended 1-1 after extra-time, Brazil won the subsequent penalty shoot-out 5-4, with Neymar scoring the winning penalty which sent the stadium into a state of euphoria. Overcome with emotion Neymar broke down in tears, you could see how much it meant to him.

The young tennis star is going to be one of Japan’s strongest gold medal hopes heading into this summer’s Games. As the highest-paid female athlete in the world, a lot will be expected of her. The four-time Grand Slam champion will head into the Olympics having withdrawn from the French Open due to the controversy of wanting to not take part in media interviews. She then missed Wimbledon which means she will be heading into the Games with a lack of competitive action, but she will be spurred on to bring some pride to her nation and she will personally want to add an Olympic gold medal to her already impressive CV.

x
Suggested Searches:
Manchester United
Liverpool
Manchester City
Marcus Rashford
Premier League
More
sports
Simone Biles Should Be Applauded For Her Withdrawal, Says Mental...
Simone Biles’ decision to withdraw from the all-around gymnastics final has been applauded by [ ... ]
sports
Day Four Olympics Round-Up: More Medals For Team GB In Best...
Great Britain has never had such a successful start to an Olympic Games. As day four comes to a close, [ ... ]
sports
Tokyo Olympics Day Three Round-Up: Team GB Enjoy A Magic Monday
It was a thrilling Monday for Team GB as the squad brought home five medals, including three golds, [ ... ]
sports
From Child Prodigy To Champion, Tom Daley Succeeds In Quest...
It has taken four Olympic Games, but Tom Daley finally claimed his first gold medal alongside Matty [ ... ]
sports
Tokyo Olympics Day Two Round-Up: Team GB Get Medal Tally Up...
There was finally some medal success for the Brits, a match to forget for the USA’s men’s [ ... ]
sports
Tokyo Olympics Day One Round-Up: Adam Peaty Through As GB Footballers...
As the sun sets on day one of the Tokyo 2020 Olympics, some of Great Britain’s finest athletes [ ... ]
sports
Is England Captain Harry Kane Worth £160m Or More To Tottenham...
Harry Kane to Manchester City. The transfer saga that looked certain to drag out through the summer [ ... ]
sports
Coronavirus Is Continuing To Play Havoc With The Sporting Calendar
The UK may have seen a considerable relaxation in Coronavirus restrictions, but the virus is still causing [ ... ]
sports
Ten Of The Greatest Ever Moments From The Olympic Games
The Olympic Games always provide incredible memories for athletes and watchers around the world and [ ... ]
sports
Three Winners And Three Losers From Team GB After Tokyo 2020...
At long last, the extended wait for the start of the Tokyo Olympics is nearly over, and the hype is [ ... ]
sports
From Skateboarding To Speed Climbing, Five New Sports Making...
The Olympics are almost upon us and with a host of new sports making an appearance, our hype for the [ ... ]
sports
Ten Biggest Shocks In Summer Olympics History
Tokyo 2020 is now just a matter of days away and as we gear up to watch the greatest athletes on the [ ... ]
sports
Tony Hawk And His Legendary 900° Landing At The 1999 X-Games
The 2021 summer X-Games, the premiere competition for extreme sports, came to a close on Friday and [ ... ]
sports
Walker The Talker: Even Without Fans, The Magic Remains At The...
Well here we go then. Whatever people think about whether it could, should or would happen, Tokyo 2020 [ ... ]
sports
140,000 Fans Set For Silverstone - But How Have Returning Crowds...
As Covid-19 restrictions move ever nearer to being lifted, we have seen the slow return to normality [ ... ]
sports
Neymar, LeBron James and Federer: The Big Names Missing From...
Dan Evans is the latest British omission who will miss the Tokyo Olympics later this month having tested [ ... ]
sports
Walker The Talker: Olympic Games Will Be A Test Of The Body...
The unifying power of sport. Anyone watching that epic semi-final on Wednesday night couldn’t [ ... ]
sports
Tom Stoltman Becomes First Scot To Claim World’s Strongest Man...
Invergordon strongman Tom Stoltman became the first Scotsman to hold the title of World’s Strongest [ ... ]
sports
England’s Croquet Five Lions Conquer Scotland To Bring It Home...
It was all a world away from the frenzied hype of Euro 2020 gripping the nation. But on five beautifully [ ... ]
sports
The Hulk To ‘The Mountain’, Five Monster Moments From The World’s...
Since its debut in 1977, The World’s Strongest Man has become a beloved spectacle to hundreds [ ... ]
sports
From Indy 500 To Giro d’Italia, Here Are Five Sport Stories...
It’s been a busy weekend in the sporting world and whilst most of the talk might have been around [ ... ]
sports
Mickelson, Serena And The Sporting Legends Who Turned Back Time...
Sport has always been a young person’s game. For years we have been blown away by the talents [ ... ]
sports
FA Cup, Champions League And UFC 262: Your Weekend Of Unmissable...
With indoor meetings of up to six people permitted from Monday, pubs being allowed to partially open [ ... ]
sports
Five Things You Probably Didn't Know About The Tony Hawk's Pro...
For a number of millennials, few athletes encapsulate their childhood as the skateboarder [ ... ]
sports
The Year Of The Fox: How The Sporting City Of Leicester Emerged...
In 2012, the greatest thing to happen to the city of Leicester was that the remains of King Richard [ ... ]
sports
No Passion, No Point: Eddie Hearn's Podcast Returns For Third...
He’s now as popular, big, and perhaps as bombastic as the boxers he promotes. Eddie Hearn is also [ ... ]
sports
With 100 Days To Go, Team GB Are Already Set For A Historic...
With 100 days until the delayed Tokyo Olympics, Team GB look set to make history before they have even [ ... ]
sports
Ranking The Best And Worst April Fool's Day Pranks From The...
So another April Fool’s Day has come to an end and as the sun sets on what for some jokers is [ ... ]
sports
The Good, The Bad And The Downright Ugly, What Happens When...
Italian giants Inter Milan have revealed a brand new club badge ahead of the Nerazzurri’s 113th [ ... ]
sports
Ahead Of Hendry Vs White, Here Are The Sporting Rivalries We’d...
As Stephen Hendry and Jimmy White are all set to rekindle their famous old snooker rivalry having been [ ... ]