‘Juggernaut’ by name, ‘Juggernaut’ by nature. Joe Joyce ran down everyone in his way to reach the front of the heavyweight queue, knocking out former WBO champion Joseph Parker in 11 entertaining rounds in Manchester on Saturday night. Both the fighter and his promoter spoke of world titles being the next step for the 37-year-old. The WBO interim bauble Joyce picked up for his troubles supposedly entitles him to a shot at unified heavyweight king Oleksandr Usyk.

The dramatic public negotiations for WBC champion Tyson Fury to fight Anthony Joshua also appear to be concluding imminently. If they are unsuccessful, as members of the ‘AJ’ camp fear, it appears likely he’ll meet Manuel Charr. But perhaps ‘The Gypsy King’ can be ensnared for a Joyce bout. Fury loves the spotlight and, after recording his finest career victory over Parker, there’s no hotter property than Joyce in the division currently.

But putting aside the twists and turns of boxing’s fragile political landscape for a moment and assuming these fights can be secured; how would Joe get on? Can he follow in the footsteps of recent British heavyweight success stories like Fury and Joshua and reign a world champion?

Joyce is unconventional and it’s fair to say neither Fury nor Usyk has fought anyone quite like him. ‘Juggernaut’ possesses a startling and idiosyncratic jab. As seen in his 2020 knockout of Daniel Dubois, his lead hand often looks like it isn’t doing anything until it does. His jab lacks the aesthetic ram-rod of a Larry Holmes or Wladimir Klitschko lead. But he knocked Dubois out with it after completely closing the eye of ‘Dynamite’. He used the same punch to marshal Parker round the ring in Manchester. It is demonstrably a more powerful shot than it looks, capable of befuddling and hurting elite heavyweights.

Another area in which Joyce differs from his fellow heavyweight contenders is his approach to defense. More pertinently, the fact he doesn’t use one. It’s not that the Olympic silver medalist can’t take evasive action. The big man demonstrated some elegant shoulder rolls to evade Parker’s danger punch, a looping right hook, on Saturday. But for the majority of a fight, Joyce will simply walk forward and absorb punches in order to land his own.

It’s an approach that has worked incredibly well so far. People thought stepping up in class would blunt the effectiveness of this remedial approach, but Joyce’s incredible ability to absorb punches coupled with his own power means he’s onto a winner. Of his opponents, only ex-world title challenger Bryant Jennings has heard the final bell. Considering the American once took Wladimir Klitschko the full 12 rounds, there’s no shame in that. Joyce’s other fourteen victims have landed plenty of leather between them, but never enough to stop themselves getting taken out. 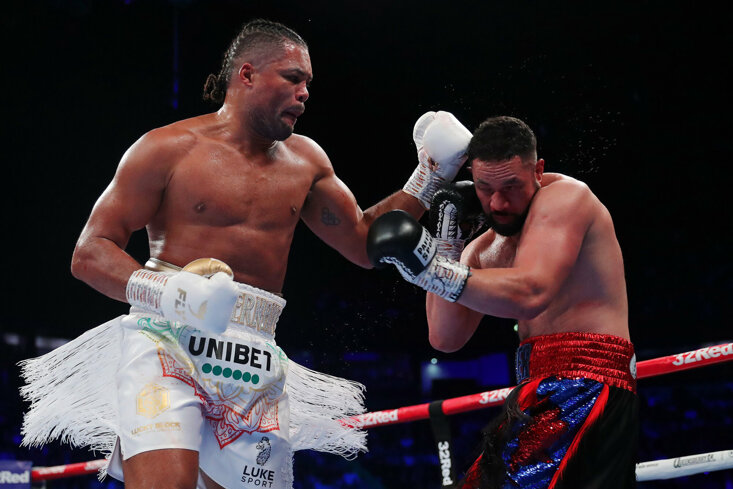 How would this strategy fare against Usyk and Fury though? Let’s start with the Ukrainian WBA, WBO, IBF and The Ring champion. ‘The Cat’ fears no man’s power. He emerged victorious and unscathed from 24 rounds with power-punching Joshua after all. He also boasts an awkwardly brilliant ring-style that is even harder to read than Joyce’s own puzzle-box stylings. Nobody has ever taken Joyce off his rhythm, but Usyk is notorious for not letting his opponents establish one.

It is unlikely that Usyk will find the power that has eluded Joyce’s 15 previous opponents. The ex-cruiserweight king is not a one-punch knockout artist. But the accumulation of blows, and the speed with which they would be dealt, would be unlike anything Joyce has seen before. It’s a well-poised match-up. Both are durable. Both are difficult to plan for. Both have a high ring IQ. Usyk has the edge considering he has called world title level his home for the last six years. But Joyce has a lot of attributes that Usyk has never encountered before, which could help him pull off the upset.

Fury is a different concept altogether. For the first time, the towering ‘Juggernaut’ would be giving up size and reach to the giant ‘Gypsy King’. He can bang, too, as Deontay Wilder and Dillian Whyte have found out in his most recent fights. His chin isn’t the best you’ll find, a clear advantage that the iron-jawed Joyce enjoys. But while knocking Fury down isn’t a problem, keeping him there is something no fighter has managed. His heroics against Wilder will live forever as an example of his incredible resilience. Fury is the hardest fight out there for Joyce and one that looks like possibly being a bridge too far.

Joe Joyce can reign as a world champion. Were we not in such a talent-rich era, he’d probably be one already. Parker had a decent reign as WBO champion a few years back and Joyce just wiped the floor with him. Bermane Stiverne had a brief holiday with the WBC belt too, and Joyce crushed him. Heavyweight boxing in 2022 is an elite club, however. But if there’s one thing that is certain after a stunning signature win, it’s the fact that Joyce thoroughly belongs in that club.

x
Suggested Searches:
The Sportsman
Manchester United
Liverpool
Manchester City
Premier League
More
boxing
Five Blows From The Body Snatcher: Dillian Whyte's Greatest...
Dillian Whyte will be looking to bounce back to winning ways this weekend when he takes on undefeated [ ... ]
boxing
Carl Froch Vs George Groves And Boxing's Great British Grudge...
Nine years ago today, Carl Froch and George Groves collided at the Manchester Arena, waging the first [ ... ]
boxing
Dalton Smith: 'Get A Couple Of Million And I'll Smack A YouTuber!'
Dalton Smith is a star on the rise. The Sheffield super lightweight has just made the first defence [ ... ]
boxing
Zach Parker Vs John Ryder: Everything You Need To Know
The WBO interim super-middleweight title is on the line at the O2 Arena this weekend in a fascinating [ ... ]
boxing
Dillian Whyte Vs Jermaine Franklin: Everything You Need To Know...
Heavyweight contender Dillian Whyte will be looking to bounce back to winning ways this weekend when [ ... ]
boxing
Gervonta 'Tank' Davis And Ryan Garcia Agree To Mouthwatering...
WBA ‘regular’ lightweight champion Gervonta Davis has agreed a fight with unbeaten contender [ ... ]
boxing
The Weekend Boxing Preview: European Titles, Unbeaten Superstars...
After a star-studded weekend where old stagers Ricky Hatton and Floyd Mayweather took part in exhibitions, [ ... ]
boxing
Martin Scorsese At 80: Celebrating Raging Bull, The Iconic 'Anti-Rocky'
“And though I'm no Olivier, if he fought Sugar Ray he would say that the thing ain't the [ ... ]
boxing
Why Dmitry Bivol Should Make 'Canelo' Come Back To 175 Pounds...
Saul ‘Canelo’ Alvarez has targeted a May return to the ring, after having surgery on his [ ... ]
boxing
Fury-Wilder 4 And Usyk-Hrgovic: The Heavyweight Fights Nobody...
Ask any boxing fan which heavyweight fight they would cherish above all others and you’d get the [ ... ]
boxing
The Panel: Should Women's Boxing Move To Three-Minute Rounds?
Welcome to The Panel, where we speak to a group of star names from across the fight game about the big [ ... ]
boxing
A Tale Of Two Exhibitions: Ricky Hatton And Floyd Mayweather...
On 8th December 2007, Floyd Mayweather defeated Ricky Hatton in Las Vegas, with the WBC and The Ring [ ... ]
boxing
Tommy Fury vs Paul Bamba Cancelled: Is Fury Unprofessional,...
Tommy Fury’s stock has never been lower. This weekend, when due to fight Paul Bamba, he weighed [ ... ]
boxing
Redemption Day: Natasha Jonas Clinches The Treble Against Marie-Eve...
A year ago, Natasha Jonas’ two most recent fights were a pair of failed attempts to win world [ ... ]
boxing
Chasing Gold: Conner Tudsbury Determined To Become A Mancunian...
There was something of a media circus the day Moss Side Fire Station Boxing Club opened its doors in [ ... ]
boxing
Haney-Lomachenko, Stevenson-Cruz And More Ordered At WBC Convention
The World Boxing Council hosted their 60th annual convention, in which they laid out plans and policy [ ... ]
boxing
'You Want Homer To Fight Tatum?!': 26 Years Of 'The Homer They...
It was a heavyweight title fight like no other. Watched by 9.7 million viewers on its initial airing [ ... ]
boxing
Back From The Brink: Natasha Jonas Has Gone From Nearly Girl...
A year ago, Natasha Jonas had failed to win her last two bouts. The decorated amateur had seemed nailed [ ... ]
boxing
This Is Hitman Heritage: The Very Best Of Ricky 'The Hitman'...
Ricky Hatton returns to the ring this Saturday in an exhibition bout against legendary three-weight [ ... ]
boxing
Ricky Hatton vs Marco Antonio Barrera: Everything You Need To...
British boxing legend Ricky Hatton returns to the ring this weekend for the first time in nearly a decade [ ... ]
boxing
Ricky Hatton On Fighting Barrera, Hitting Campbell With Body...
British boxing legend Ricky Hatton returns to the ring this weekend for the first time in a decade when [ ... ]
boxing
Sunny Edwards Vs Felix Alvarado: Everything You Need To Know...
Flyweight world champion Sunny Edwards defends his IBF title on Friday in Sheffield when he collides [ ... ]
boxing
Logan Paul's WWE Career Is The Perfect Antidote To Jake's Boxing...
Logan Paul woke up on Sunday morning with a torn meniscus, torn MCL and a potentially torn ACL. The [ ... ]
boxing
Floyd Mayweather Vs Deji: Everything You Need To Know
Floyd Mayweather’s post retirement exhibition tour continues this weekend and this time it is [ ... ]
boxing
'Canelo' Rematch Or Undisputed Glory? What Next For Dmitry Bivol?
WBA light heavyweight champion Dmitry Bivol was superb on Saturday night, elegantly out-boxing previously-unbeaten [ ... ]
boxing
Like Father, Like Son: The Mixed Fortunes Of Boxing's Paternal...
Campbell Hatton returns to the ring this Saturday in Abu Dhabi. The 21-year-old will face 9-5 Denis [ ... ]
boxing
Jamie Moore On Taylor-Catterall: ''What Happened Last Time Can't...
Boxing trainer and former European super welterweight champion Jamie Moore is in for a busy few months. [ ... ]
boxing
Josh Taylor And Jack Catterall Rematch Looks Set For Glasgow...
Reports have emerged suggesting the long-awaited rematch between WBO super lightweight champion Josh [ ... ]
boxing
Houston, We Have A Problem Child: What Next For YouTube Boxer...
Jake Paul defeated UFC icon Anderson Silva by unanimous decision on Saturday, knocking down ‘The [ ... ]
boxing
WBA Light Heavyweight Champion Dmitry Bivol On 'Zurdo', 'Canelo'...
WBA light heavyweight champion Dmitry Bivol defends his title against Gilberto ‘Zurdo’ Ramirez [ ... ]