Joachim Löw’s finale as Germany’s head coach was a disappointing one as Raheem Sterling and Harry Kane spoiled the end of his Die Mannschaft dynasty. England's 2-0 win at Wembley in the Euro 2020 round of 16 was a dispiriting end to a 15-year era which had so many high points.

Löw was left disappointed in one of his stalwart figures on the pitch, Thomas Müller. The attacker had a golden opportunity to draw Germany level late in the game as he ran through on goal with just Jordan Pickford to beat. But  somehow he managed to fire his effort wide. It was the chance the veteran was always destined to have against a side he has tormented in the past, and that miss really summed up the latter years of Löw’s reign.

That crucial miss was punished as England secured their victory with Kane’s late header. After some impressive play in the first half, the lack of quality in the final third was clear to see as Germany struggled to muster as many chances in the second half.

The German coach was already aware that this tournament would be his last but he could not get his side back to the heights set earlier in his tenure. Instead, this tournament followed an underwhelming World Cup defence in 2018 and a close but not close enough bid for Euros success in 2016. 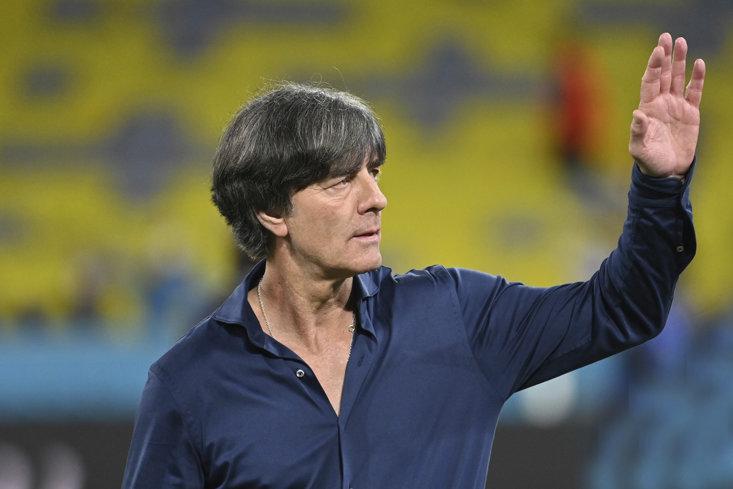 However disappointing the conclusion to the Joachim Löw era, his legacy cannot be forgotten. They were utterly brilliant when they were crowned world champions in 2014 and they played some of the best football ever seen on the international stage. No one will ever forget how his side humiliated Brazil in their own back yard in the semi-final that year with a 7-1 thrashing in Belo Horizonte, which highlighted the amount of work Löw tirelessly put in to make Die Mannschaft a powerful force on the international stage.

The 61-year-old will be saddened at how his swansong tournament has ended so early but he cannot be too disheartened with what he has achieved with this side in the 15 years he has spent at the helm. It is time to pass the torch over and it will be interesting to see how Hansi Flick manages this group who have the potential to reach the heights of 2014 again.

Leon Goretzka had the first effort of the game but his shot was comfortably gathered by Jordan Pickford. Goalkeeper Manuel Neuer had to be alert to tip Raheem Sterling’s effort past the post as gaps were being found when Germany lost concentration.

Timo Werner had an excellent chance to put Die Mannschaft in front but Pickford did brilliantly to deny him at the near post. Pickford was again at his best when tipping a Kai Havertz rocket over the bar in the opening stages of the second half. But their best chance of all came late on to potentially take the game to extra-time, but Müller forced his effort wide of the far post and the Jogi Löw era was over.

It will be a bitter pill to swallow, but Germany has reason to thank the man who, at his best, took their football team back to great heights.