Snooker
News
The former world champion says he, Ronnie O'Sullivan and Mark Williams are as good as ever
Hector Nunns
18:00, 25 Apr 2022

John Higgins reckons the ‘Class of 1992’ are playing better than ever – and could even keep going until they are all 60.

Four-time champion Higgins swept into the quarter-finals of the Betfred World Championship with a 13-7 win on Monday over Thailand’s Noppon Saengkham at the Crucible Theatre. That means that the Scot, Ronnie O’Sullivan and Mark Williams, who all turned pro 30 years ago, are all into the last eight in Sheffield.

It is the first time that has happened for the trio with 13 world titles between them for 11 years and the bad news for the next generation is that they could be hanging around a lot longer.

Higgins said after completing his win on Monday: “I don’t see any reason why we might not still be playing at 60, like Jimmy White! Why not?

“Mark has said he basically now will not retire; Ronnie…who knows. And, aye, I probably could. I hope the fitness work I have done will prolong my career, and not fizzle out as quick.  I think it is incredible that after 30 years on tour the three of us are better players than we have ever been.

“I feel as if I am; Mark Williams has played incredible since he started using the SightRight technology and Ronnie…he’s scrapping for every frame these days, when occasionally he would throw in the towel.

“I would say he too is undeniably a better player than he has ever been. And to be able to say that after 30 years is amazing. 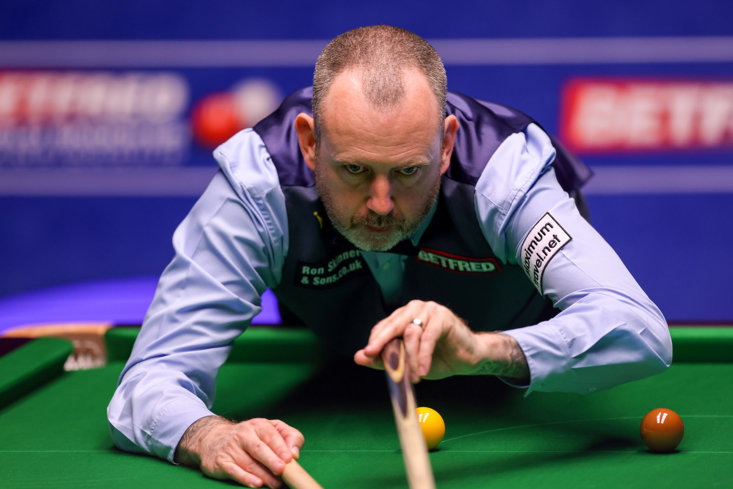 “I  have come here and flown out of my nut in the first two rounds and then come a cropper. I haven’t played great yet, but I can feel something , like I am getting some rhythm. I have still got a chance.

“I was a bit annoyed to only be 4-4 after the first session after being 4-1 up. I was walking out at the end and he nearly knocked me out with a shoulder barge, and a fist pump to his family!

“There was no malice intended, that is just how Noppon is, a lovely and excitable guy. But I played better on Sunday night, winning seven of the eight frames to do the damage.

“At 11-5 in front you have one foot in the quarter-finals. I’ll look forward to next match now..if you can’t get excited about games like this, you shouldn’t be playing the game.”

Saengkham had missed the birth of his first child, a daughter named ‘Believe’ who arrived four weeks early, while he was competing at the Crucible.

And his run, that began with a mild shock victory over Belgium’s Luca Brecel in the first round, was ended by the Scot – an exit that will see him swiftly reunited with his family back home.

Saengkham, who also missed the final red on a 147 attempt that might have pocketed him £47,500, said: “I have to wait two days to do all the documentation and then I will be going back home, maybe fly on the 27th or 28th.

“My daughter is still in the hospital at the moment now so the doctors have said my wife and I can’t go in there yet, so we see pictures and video and then we will go in as soon as we can. Everything is okay but hopefully next week we can spend time as a family.

“I will take a month off before next season starts spend time with my family and do some practice.

“John is such a great player and I learned a lot during this match, especially from that second session when he nearly won all eight frames.

“I felt a bit like panicking because the Crucible is a very different place to play with the crowd so close, and it can make you think bad thoughts if you are losing like on Sunday night.

“I didn’t play very well and John was very good, he controlled the game really and it is up to me to learn all that I can from that.

“I need to play against world champions at the Crucible and compete and win, so hopefully the next time it happens I can do that. If I want to win the world title, I must improve.

“You learn every time about dealing with the pressure, the crowd and how the table plays.

“I did bump into John at the end of the first session, I was so happy to win the last three frames and get to 4-4 it was just a mistake, an accident and I said sorry to him.

“I was getting very excited about the 147 and thought I could do it, I’ll have to do better next time.”