Football
News
The centre-back has been in imperious form for Pep Guardiola's side
Elliott Bretland
10:00, 16 Mar 2021

John Stones has always had a swagger and arrogance on the ball. During his days at Everton, the defender performed not one but three turns in his own six-yard box with just two minutes left on the clock as the Toffees held onto a 1-1 draw with Tottenham. The skilful manoeuvre was met by plenty of angst from Blues sat in the Park End who instantly made their panic known and insisted he boot it into Row Z next time he was closed down by an attacker.

However, Stones wasn’t fazed. Cool as a cucumber, the lanky centre-back motioned for them to calm down; he had the situation under control. With the ball at his feet, they needn’t worry. It takes immense bravery to be so at ease in the most dangerous of situations and Stones was stoic in his desire to play football, just like his current manager Pep Guardiola.

Five years on from that day at Goodison Park, he is playing for Premier League leaders Manchester City and that swagger and arrogance has been replaced by a genuine confidence. Stones is playing the best football of his career and he is excelling. He is enjoying his football too and you could see it on his face as he celebrated with his team-mates after netting the opener in City’s 3-0 win at Fulham on Saturday evening. It was his fifth goal of 2021. Not a bad return from a defender and he is shining in both boxes.

This now is a man who is well aware he has formed one of the strongest defensive partnerships of recent times alongside Ruben Dias. Stones knows he can play and he knows he can defend. However, this brilliant purple patch has come after some dark and difficult days.  Such a relaxed approach to playing the beautiful game at the back means that mistakes are going to get focused on. A lot. Especially when you’re playing for one of the best clubs in Europe. 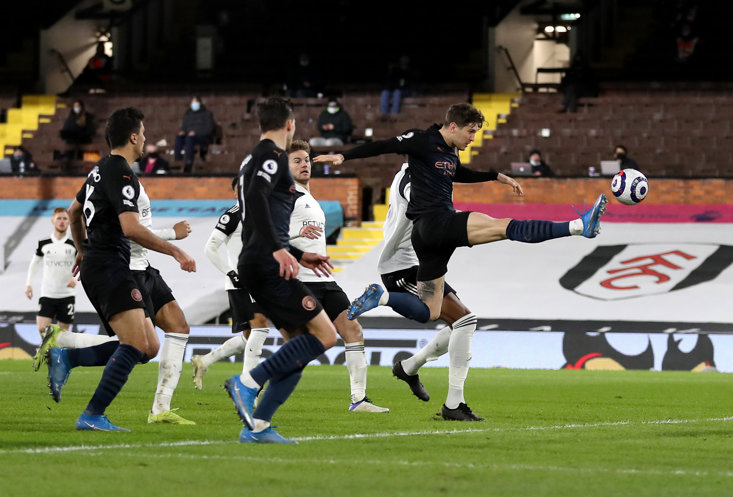 In March last year, the Manchester Evening News reported that fans called for Stones to be dropped after he misjudged a long ball which allowed Aston Villa to score in the Carabao Cup final which City ultimately went onto win, while a calamitous display in September 2019 alongside Nicolas Otamendi led to a shock 3-2 defeat against Norwich City, who eventually finished bottom of the Premier League. In 2018, Tony Cascarino, writing for The Times, described Stones as error-prone, and others have been quick to apply similar tags to his name.

It’s fair to say that Stones has had his doubters, but the way he has responded this season to help fire City to the top of the table by 14 points and keep the amazing Aymeric Laporte out of the team says all you need to know about his attitude, desire and application.

Sure, playing for City means the defender is constantly under the spotlight, but playing for City also means he lines up alongside Ruben Dias every week and the pair are seemingly getting the best out of each other. Stones and the Portuguese have been key cogs in Guardiola’s team, helping them to win 23 of their last 24 matches.

When City host Borussia Monchengladbach on Tuesday in the second leg of their Champions League last 16 tie, Stones is going into the game with many talking him up for a possible England recall as Gareth Southgate prepares to name his squad for this month’s World Cup qualifiers. The 26-year-old has not played for his country since November 2019 but is expected to be named in the team for the matches against San Marino, Albania and Poland in the last week of March and his club coach would be overjoyed for him.

“He deserves it,” said City manager Guardiola after the win at Craven Cottage. “Of course, Gareth Southgate knows better than me what he needs but, just in case it happens, the one person who will be delighted and happy about his comeback for the national team will be me. It was another great performance. The goal was so important. The way he played, I’m so happy.”

It will be a big moment for the Barnsley-born defender, who said when asked if he was eyeing a Three Lions call-up: “Definitely. It is a massive honour for me, and being out of the England squad has been really difficult for me.

"I’ve worked really hard to get back in the team here and the England call-up, if it comes, is progress from what I’ve done here at City."

Stones has always had immense faith in his ability, just ask those Evertonians, and whether it’s on the ball, making tackles or scoring goals, he’s proving his doubters wrong as one of the best centre-backs in the country. Southgate is sure to have noticed and will reward him with a first cap in well over a year.