Joseph Parker has beaten Derek Chisora by a split decision in Manchester (115-113 Chisora, 116-111 Parker, 115-113 Parker) despite knocking the New Zealander down within seven seconds of round one. After a battling display from both fighters, it was decided by the judges scorecards, in which one of the judges strangely gave just three rounds to Chisora, a decision that left him frustrated after the bout.

"I'm beyond getting upset now. It's difficult because I train hard, I fight, I put pressure on, and this is the treatment I get from boxing. My last fight. This fight. They don't like me. It's disappointing.

"I can't get upset. It's horrible. I give everything. These are the results I get. If he wants to give me the rematch, I will take it. His coach Andy Lee said I won the fight!"

Chisora felled Parker within seven seconds with a thumping right hand in the first round as the 36-year-old came out of the blocks firing. Although Parker came to the ring second, he was caught napping with almost the first punch of the entire fight, an overhand right hander that left him on the deck. He got up to recover and land a couple of big shots of his own but the opening exchanges definitely belonged to the Londoner.

Parker recovered in the second as Chisora attempted to heap the pressure on with body shots but the New Zealander was able to land a couple of his own shots. In round three the Brit once again landed a looping right hand which crashed Parker back into the ropes but he once again held on, clearly struggling with the huge physicality of his opponent. Round four was more of the same, another big right hand, another bully boy round from Chisora in Manchester.

Parker used his jab well in the fifth to stay out of trouble after advice from his corner and seemed to grow into the fight more during the sixth, as Chisora continued to work at his body. Parker began to find more time and space as the fight progressed and in the eighth he landed a sharp three punch combination as Chisora was clearly tiring, despite instructions from his corner.

A late flurry from both fighters in the eighth was exciting, but Chisora had clearly reached the bottom of his tank. The pressure he had put on early doors clearly hurt him in the later rounds as Parker took the rounds with some well-timed shots. A left right combination in the tenth and a strong right hand in eleventh brought him back into the fight on the scorecards, which meant the final round was to be decisive.

Chisora landed a huge right hand early on and pressed Parker hard, before the New Zealander landed a clean shot which backed the Brit onto the ropes. For some unknown reason Parker didn’t push forward and let his hands go when his opponent was dazed and Chisora came back and took the fight to Parker in the final few seconds. However, it wasn’t quite enough as yet another split decision went against him, as Parker takes the victory after a difficult night. 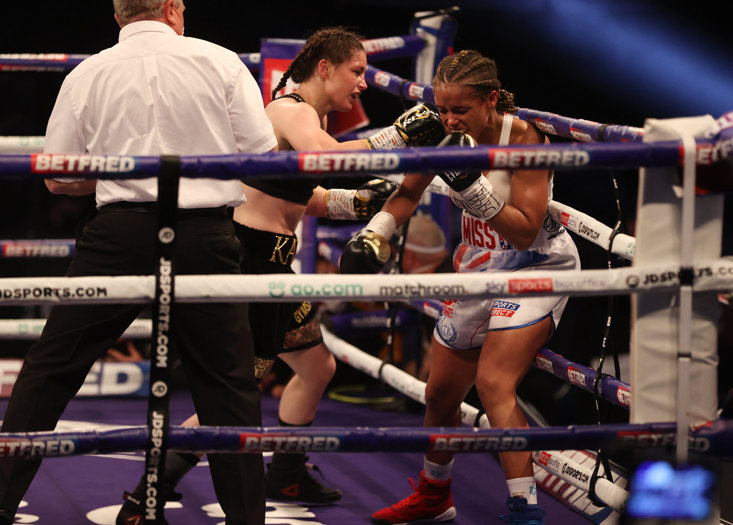 Meanwhile, Katie Taylor came through one of the toughest fights of her career to win by a close unanimous decision after an enthralling encounter with Natasha Jonas and keep her unbeaten record intact.

In the opening rounds Taylor seemed to be targeting Jonas’ body while the Brit countered with an impressive right hook in round two. Round three saw an impressive trade off as both fighters began to let their punches go, after a sharp left jab from Jonas led to a series of brutal body shots from the pair.

There really was nothing to separate the two heading into the middle rounds as the now 18-0 Taylor put the pressure on and appeared to take round four after an impressive finish but the Brit bounced back in round five and once again was brave enough to trade off with the Irish fighter, who is so effective on the inside.

Round six saw Jonas come on strongly and she landed an incredible right-left combination which left Taylor with her back turned to her opponent. It was clear throughout that Taylor had the faster hands and appeared to be attempting more punches, but Jonas made hers count with her power and timing to put this fight firmly up in the air.

Seven was clearly Jonas’ round as she landed a strong left to the body of Taylor before she caught her upstairs while she followed it up with more of the same in the eighth although Taylor was able to reply with a few combinations of her own. This really was a paper thin margin between these two and in the final two rounds both fighters gave it their all.

Round ten saw both fighters stand toe-to-toe and trade punches as Taylor finished strongly with a flurry of punches, but In one of the fights of 2021 she just came out with the unanimous decision. The judges scored it 96-94, 96-95, 96-95 showing just how close this one was and surely now we will see a rematch between the pair.

“Everything is possible, I’m always willing to step back in there against anyone,” the victor said after the win.

"There’s a lot of big, big fights out there for me. I just want to be involved in the biggest fights possible and if that’s a Jonas rematch then so be it.”

On the undercard, Chris Eubank Jr completed his comeback fight with few issues, coming through ten rounds against Marcus Morrison without any major problems. A couple of big right hands in the final two rounds forced Eubank to backpedal, but it was a job well done for the big-talking Englishman. Ricky Hatton’s son Campbell also secured the second win of his professional career winning all four rounds of his bout against Levi Dunn.