Boxing
News
The Sunderland-fighter was unsuccessful in his bid to capture the European welterweight title at Wembley
Kieran Spratt
23:31, 20 Feb 2021

Boxing is a cruel sport. Josh Kelly had to wait 26 months for his moment and it was all over in just six rounds after the Sunderland fighter failed in his bid to snatch David Avanesyan’s European welterweight title, suffering a knockout defeat at Wembley Arena on Saturday night.

Avanesyan made it four knockout wins from his last four fights but it was Kelly who started the brightest of the pair. Happily stepping into the Nottingham-based Russian’s pocket, Kelly landed the cleaner of the shots in the opening round and, in the second, managed to hurt Avanesyan with a vicious left - though not without sustaining a cut.

The 26-year-old continued to control the fight but Avanesyan picked up the tempo and put on the pressure as Kelly’s bleeding continued. The Russian’s corner could be heard crying out to not let his opponent be given an opportunity to breathe and like a shark sensing blood, Avanesyan did just that.

The 32-year-old began to turn the heat up in the fifth and managed to catch Kelly, who’d opened up another cut after an accidental clash of heads, with a series of decent lefts. It was all over in the sixth round when two thumping rights sent Kelly to the canvas - he recovered but was swiftly dispatched when he was knocked down again, this time though, his corner had seen enough and threw in the towel.

Avanesyan’s trainer. Carl Greaves, was delighted at his fighter’s desire to win although he wasn’t surprised by the outcome, “We told everybody but they thought I was a crazy coach who knows nothing.

"I've seen kids who can keep him off for 30 seconds or a minute but David always finds a way. I knew how it would go."

Kelly, a former Olympian, is one Britain’s brightest prospects and has been mooted to fight Conor Benn, but for now he’ll now need to go back to the drawing board after suffering the first defeat of his career.

His promoter Eddie Hearn said, “It's always tough for the loser. Sometimes you come across a guy who will not be denied, tonight that was Avanesyan.

"Kelly had a wonderful camp, was in the shape of his life, but Avanesyan wouldn't be denied. He was too tough.

"We saw an elite welterweight against a really good prospect who can become world class.”

When asked about what’s next for Avanesyan, Hearn insisted that he deserved to mentioned alongside the best welterweights. "Avanesyan should get a world title shot. Shawn Porter, Terence Crawford, Errol Spence, Danny Garcia?" 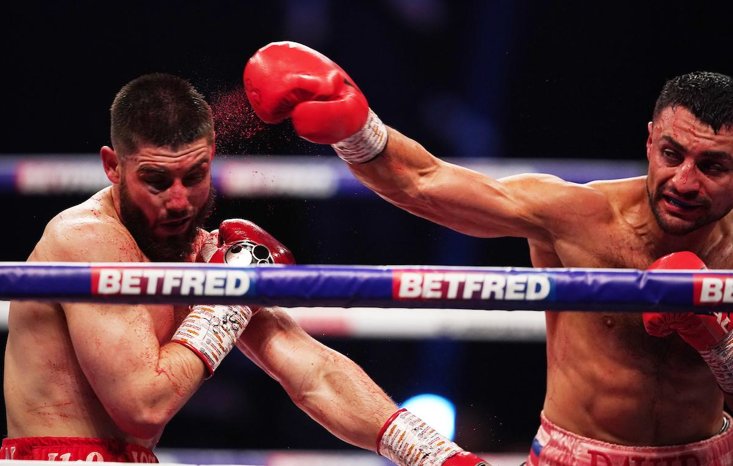 Elsewhere on the card, following on from Josh Warrington’s upset at the hands of Maurico Lara last weekend, another Mexican fighter came to the UK to land a big upset. This time it was Gabriel Valenzuela who put in a terrific performance to edge out Liverpool’s Robbie Davies Jr with a majority decision (96-95, 96-95, 94-94).

The welterweight clash between Florian Marku vs Rylan Charlton meanwhile certainly didn’t disappoint on its pre-fight promise. Marku dominated for most of the fight before being floored by a single shot in the sixth round but the Albanian recovered and Charlton’s corner correctly came to their fighter’s rescue by throwing in the towel in the eighth.