Judging from the post-fight reaction, the only people who saw Josh Taylor as a points victor over Jack Catterall on Saturday were two of the judges and Taylor himself. The split decision in that undisputed super lightweight title fight has been hotly-debated all weekend.

The verdict brings to mind some of boxing’s other contentious decisions. Here are five of the most controversial judges’ calls in professional boxing history.

Proving divisive scoring is not exclusively a modern problem, Joe Louis’ points nod over Jersey Joe Walcott in 1947 was so unexpected, Louis himself apologised for it.

Walcott had knocked ‘The Brown Bomber’ down twice, and Louis carried a gruesome left eye injury from the frequent blows he received. One of the gentlemen of the sport, Louis granted Walcott a rematch in his next fight. On that occasion, Louis won via 11th-round knockout. Critics will say that the win should have seen him regaining, rather than retaining, the heavyweight championship of the world.

You probably know Shannon ‘The Cannon’ Briggs best for his viral “Let’s go champ!” campaigns of the last decade. What you may not know is that he defeated George Foreman in the last fight of the great man’s career.

Except to most observers, he did nothing of the sort. Fighting for the lineal heavyweight championship of the world, at a time before Tyson Fury made that cool, Foreman rocked Briggs all night long and out-landed him in almost every round. The judges saw something different though, and the oldest heavyweight champion in history lost the last vestiges of his recognition by majority decision. Many pundits pointed out this was karma, as Foreman had retained his title via a controversial decision over Axel Schulz two years before. Live by the sword, die by the sword.

Two of the greatest heavyweights in history. The first undisputed heavyweight title fight in eight years. What could possibly go wrong? As it turned out, quite a lot.

The much-ballyhooed crowning of an undisputed king didn’t occur, as despite a night of Lennox Lewis dominance, his unification attraction with Evander Holyfield was scored a draw. Lewis had every right to feel aggrieved. He had landed 348 punches to Holyfield’s 130, and even the American crowd booed when the decision wasn’t awarded to the Brit.

The result was corrected in the rematch, when Lewis won what was ironically a much closer fight as Holyfield performed far better than in the first. 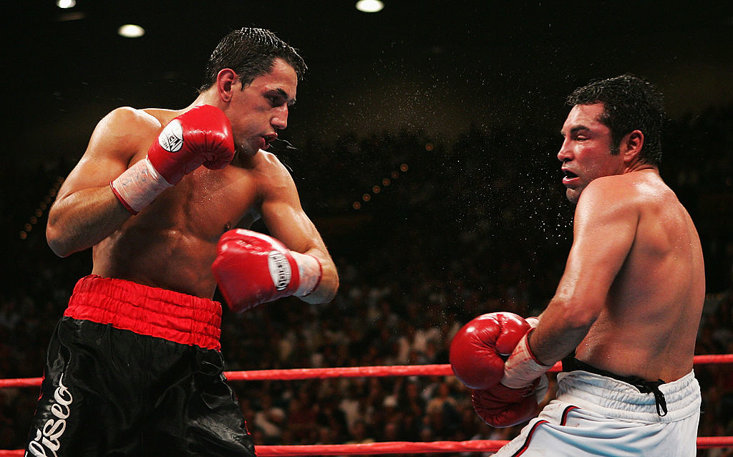 The old adage dictates that you never let the facts get in the way of a good story. The same rings true of this situation, in which WBO middleweight champion Felix Sturm defended his title against Oscar De La Hoya. ‘Golden Boy’ already had an undisputed title showdown penciled in with WBC, WBA and IBF kingpin Bernard Hopkins, and Sturm was supposed to represent a mere box-ticking exercise.

Unfortunately for Oscar, he looked decidedly second-best against the motivated champion. While De La Hoya looked tired and uneasy at the highest weight he’d ever boxed at, Sturm went about the professional job of dismantling his illustrious foe.

Money is king in boxing though, and somehow De La Hoya was awarded the unanimous decision. Most importantly, his super-fight with Hopkins remained intact. Sturm launched an official complaint, but to no avail. De La Hoya would be stopped in nine rounds by a violent Hopkins body shot, and never again darkened the doors of the middleweight division.

‘Pac Man’ was no stranger to dodgy judging by the time he met Australia’s Jeff Horn. In 2012, Timothy Bradley had beaten Pacquiao on a split decision that was almost universally reviled by both pundits and fans. But his scorecard woes would continue five years later.

Horn was on the brink of a referee stoppage in the ninth round, such was the Filipino’s dominance of the bout. However, when the cards were read out, Horn had taken the decision unanimously.

The press row did not share this view, with 12 of the 15 outfits present awarding the fight to Manny. Only two saw Horn as the rightful victor, while one chalked the bout as a draw. Pacquiao was magnanimous in defeat, but it was hard not to feel sympathy for a man losing his WBO world title in this fashion.