In one of the worst boxing decisions in recent memory, Josh Taylor retained his status as undisputed super-lightweight champion with a controversial split-decision win over Jack Catterall at the OVO Hydro in Glasgow.

‘The Tartan Tornado’ had made pre-fight boasts that he would outclass Catterall when they met in the ring, but instead found himself outmatched by his English rival and was incredibly lucky to exit his homecoming fight with his WBA, WBC, IBF and WBO straps still intact.

Mandatory challenger ‘El Gato’, a 17-2 betting underdog, started brightly against the Prestonpans southpaw and the champion was outboxed for most of the early rounds, with the Chorley native building up what looked to be a formidable lead on the scorecards.

A bad night at the office for Taylor turned into a disaster in the eighth, when the local hero was floored. Although Catterall was deducted a point for holding in the ninth, offering the home fighter some respite, Taylor then found himself on the end of a point deduction a few rounds later for clocking Catterall after the bell.

A few rounds were too close to call, but all signs pointed to Taylor needing a knockout to count his Scotland ring return a success and when the final bell rang, few could begrudge Catterall wheeling away in celebration, having clearly outmaneuvered and outskilled his opponent across the 12 rounds.

Catterall put in an astonishing shift north of the border tonight and simply couldn’t have done any more to win the fight on the scorecards. So the rulings of 113-112 in favour of Catterall, and 114-111 and 113-112 in favour of Taylor, will quite rightly leave a sour taste in the mouths of boxing fans everywhere.

Despite the controversial win, Taylor is adamant he deserved the nod and doesn’t know if he’ll offer Catterall a rematch.

“It wasn't my best performance and he caught me with some good shots. I put a lot of pressure on myself and it showed in the first half of the fight but when I found my rhythm I started catching him. I know I won the fight."

"It is getting harder to make the weight and that will most likely be my last fight at 140.  I don't think there is any need for a rematch. I won in the second half of the fight. I took over and bossed him."

Catterall’s trainer Jamie Moore spoke passionately about the controversial defeat in the aftermath, saying: "You are talking about a kid who has worked hard all his life, who beats a champion in his own backyard and is robbed.

“Think about the message that sends. It is disgusting. I don't even know what to say. Jack is heartbroken."

Two-time Olympic gold medallist Robeisy Ramirez, 9-1 (5), showed his class with an electric stoppage win over Eric Donovan, 14-2 (8). The Cuban featherweight, who beat Shakur Stevenson in the 56kgs final at Rio 2016, dropped the five-time Irish national champion in the opening stanza before ending proceedings in the third with a huge left hook. Ramirez lost his pro debut to Adan Gonzalez which left some question marks over his potential in the paid ranks, but a career-best win tonight showed that the sky’s the limit for the slick southpaw. 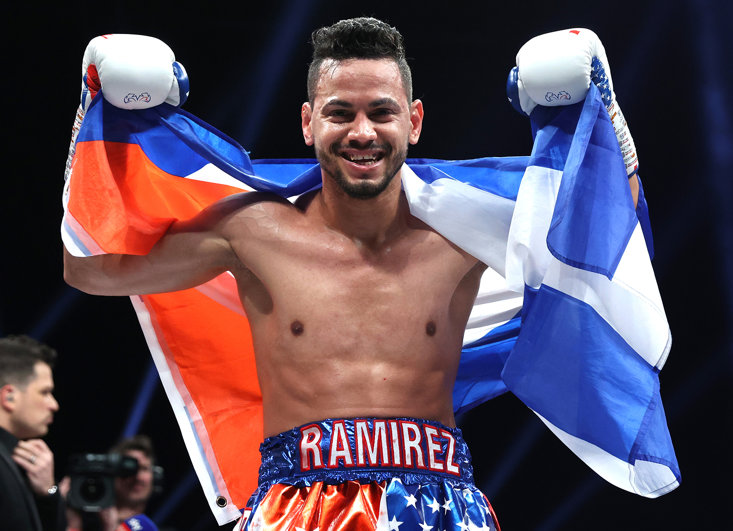 In the first Scottish Area heavyweight title scrap since 1951 and the most bizarre fight of the card, former Glasgow Warriors star Nick Campbell (5-0) stopped a woefully outmatched Jay McFarlane in seven rounds. Campbell, a former teammate of darts ace Gerwyn Price, was forced to huff and puff against his compatriot to get the knockout and, despite dominating, didn’t exactly set the world alight with his own performance.

Highly-rated welterweight Paddy Donovan extended his fight record to 8-0 (6) after halting Miroslav Serban in six rounds. The Andy Lee-trained ‘Real Deal’ never really needed to get out of first gear, easily outclassing the Czech Republic native in another impressive display from the 23-year-old

In her second professional outing, Boxxer super-bantamweight prospect Ebonie Jones (1-0-1) was held to a surprising 57-57 draw by Effy Kathopouli. The Portsmouth fighter looked to have just about nicked the fight, displaying some nifty footwork and decent punch variety that caused her Greek opponent some difficulty in the earlier rounds. However, the intense affair was far from one-way traffic, with a defiant Kathopouli taking a footing from the third round.

The evening’s TV coverage opened with an all-Scottish super middleweight affair between Jordan Grant and John Docherty. ‘The Doc’ ended the fight swiftly, stopping Grant in the second round after following up a superb body shot with a shot to the forehead. The 2018 Commonwealth Games bronze medallist moves to 12-1 (11).