Boxing
News
A packed house at the First Direct Arena roared 'The Leeds Warrior' on to a historic victory
Joey Mills
23:44, 26 Mar 2022

Josh Warrington has reclaimed the IBF featherweight championship, stopping Kiko Martinez in seven bruising rounds at the First Direct Arena in his native Leeds. Cheered on by an incredible atmosphere in his hometown, ‘The Leeds Warrior’ broke down the veteran Spanish gladiator in a magnificent contest.

The night could not have started any better for Warrington and his thousands of supporters inside the arena. A huge overhand right dropped the champion, and it looked like we could be in for an incredibly short evening. Martinez rallied, but he ended the round taking heavy fire on the ropes. ‘La Sensacion’ fired in a shot after the bell, just to demonstrate he had something left in the tank.

The second round began with a stiff Warrington left hook that dipped the knees of his opponent. A follow-up right appeared to hurt the Spaniard further. Blood began to pour from Martinez’s forehead, the result of a first-round head clash. A breathless exchange along the ropes ended with a Martinez left hook, a solid shot that appeared to bother the challenger.

The third saw the pace understandably drop, and Warrington took advantage with smart use of the jab. The home fighter took the round with movement and clever, economical boxing as a chess match broke out in the middle of the war. The breather allowed Josh to pour on the pressure in the fourth session, and though Kiko battled back he was thoroughly out-landed.

It began to look like a very popular win was afoot as Warrington fired off solid left hooks to take the fifth. Martinez was unbowed, and never noticeably slowed down as he tried to find the sort of game-changing shot that took out Kid Galahad in his last fight. 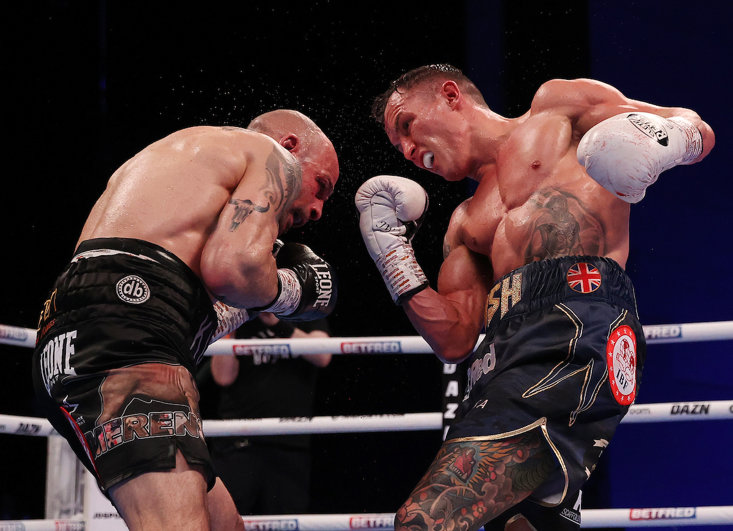 After a war of attrition in that round, Warrington once again got on the back foot in the sixth and boxed intelligently. Kiko was frustrated as he was made to miss before being made to pay with a barrage along the ropes. Warrington ended the round with a textbook feint and a stinger of a straight right hand.

The fight started to resemble a rout in the seventh, as the brave and stoic Martinez swallowed a big right cross and a swift combination. The champion had one last magnificent stand at the age of 36, staggering Warrington with a right hand that made him hold. The pain seemed to spur ‘The Leeds Warrior’ into life, and he walked Martinez into the ropes and beat the final sliver of resistance out of him. The referee correctly stepped in to end the contest, and start the second world title reign of Josh Warrington.

Warrington never lost this title in the ring, having been stripped by the IBF when he sought to unify the belt with then-WBA champion Xu Can’s title. Now that belt is in the possession of Nottingham’s Leigh Wood. A featherweight unification showdown between the two Matchroom fighters makes sense next, and would be a blockbuster occasion worthy of this thrilling division. For now though, Warrington deserves to relish a job well done.