Josh Warrington will carry a tribute to Leeds Rhinos icon Rob Burrow when he faces Mexican Mauricio Lara on Saturday night, he announced at Friday's pre-fight weigh-in. The pair of fighters have made weight, with the home fighter coming in at 125.1lbs and Lara at 125lbs, both inside the 9st weight limit.

But Warrington, the 1/25 favourite with Betfred on Saturday, has always been immensely proud of his Leeds roots and confirmed that his fight-night shorts will feature rugby league legend Burrow. Burrow, also synonymous with the city, has inspired the sporting world as he continues to battle motor neurone disease, and Warrington spoke of how inspired he is by the former Leeds Rhinos player, delivering a very personal message to the ex-scrum half.

“Listen Rob, you are a massive inspiration and you keep fighting, my mate, you keep staying strong,” said Warrington. “Already you’ve proved that it doesn't come down to natural abilities. You’ve made the best with what you can do with your skill set and determination and I see that, and I’m inspired by it. You inspire everyone in the city and the country. Stay strong, my mate.”

He also told Sky Sports at the weigh-in how he spoke to Rob, and they had big plans for a fight at Headingley. 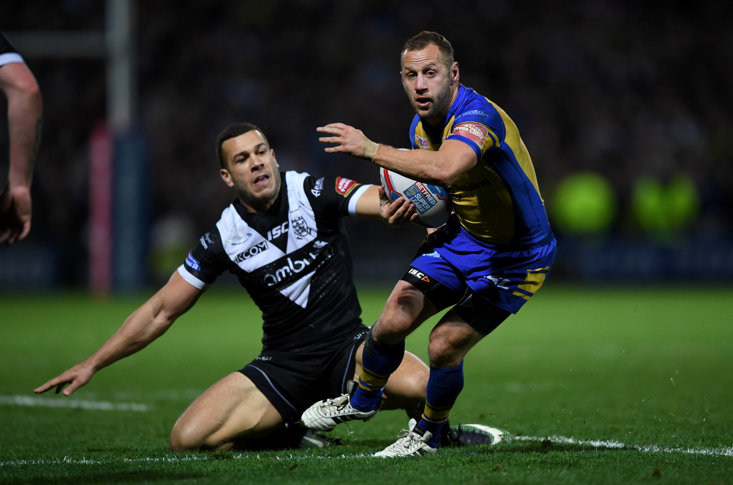 RHINOS LEGEND BURROW WAS DIAGNOSED WITH MND IN 2019

“Last year when I signed back with Eddie [Hearn] and Sky, the talks of the big fight with Can Xu at Headingley Stadium, we had a press conference there, a load of excitement. We had a gala dinner there as Rob’s condition had been made known to the public, auctioned off a belt and made a fair bit of money, and I got the chance to have a little word with Rob. It seemed fitting at the time, if we were fighting at Headingley, that Rob would do me the honour of walking me to the ring. He said he would do when he was more able, and he was speaking pretty well then.

“Obviously a couple of factors have come in, his condition has got a lot worse and obviously we are fighting behind closed doors so he can’t be here, but he is there in spirit with us. I’ve put him on my shorts and normally I do have a Leeds legend walking me to the ring, whether it be football, rugby, they could play bloody tiddlywinks as long as they represent the city and they follow me, then I’m behind them all the way. So it is just a little recognition of the main man there.”

This touching tribute, featuring Rob’s name and the number seven, will be shown on Saturday night as Warrington hopes to improve on his unbeaten 30-0 record before heading towards potential fights with Gary Russell Jr or Xu Can, the fight that fell through earlier this year. That bout was not sanctioned by the governing body and as a result, Warrington vacated the IBF featherweight belt.

This will be Warrington’s first piece of action since he beat Sofiane Takouchet in October 2019 and he is aware of the dangers that his opponent Lara brings to the table, boasting a better knockout record than he does, and at just 22 years old, potentially more energy than experience.

Saturday’s fight is due to start at around 10pm, with coverage on Sky Sports beginning at 7pm.