Judd Trump has told Ronnie O’Sullivan to “put his money where his mouth is” to escalate the row over women’s prize money.

Both the Juddernaut and the Rocket took part in the world mixed doubles last weekend featuring the top four ranked men and women players. And afterwards reigning and record seven-time world champion Sullivan, 46, blasted World Snooker Tour bosses over the far lower level of financial reward on the women’s circuit.

Four women including O’Sullivan’s recent partner and 12-time women’s world champion Reanne Evans also now play on the main tour. O’Sullivan is a multimillionaire and earned £500,000 for his most recent Crucible win – but more than half the tour are earning on average £40,000 or less before travel expenses.

He had said: “It's so wrong that World Snooker haven't made it better for the girls.

“Why can't they just take five percent off the prize money and give the ladies a good opportunity to play in good conditions?

“I think everyone would support it and back it. The world mixed doubles shouldn't be a special event for them, it should be normal.

“Reanne Evans is  a 12-times world champion, that's some feat. At least let her make it a professional job where she doesn't have to go out and do other things to make ends meet.”

But former world champion Trump, 33, responded: “I am sure Ronnie has got enough money to give away that five per cent in total.

“It is a lot easier to say stuff and get a debate going. But he is more than welcome to do it himself.

“If he has that strong an opinion about it, why doesn’t he go ahead and do it – and put his money where his mouth is? And then the rest can choose if they want to follow his example or not. He can start the fund or kitty. 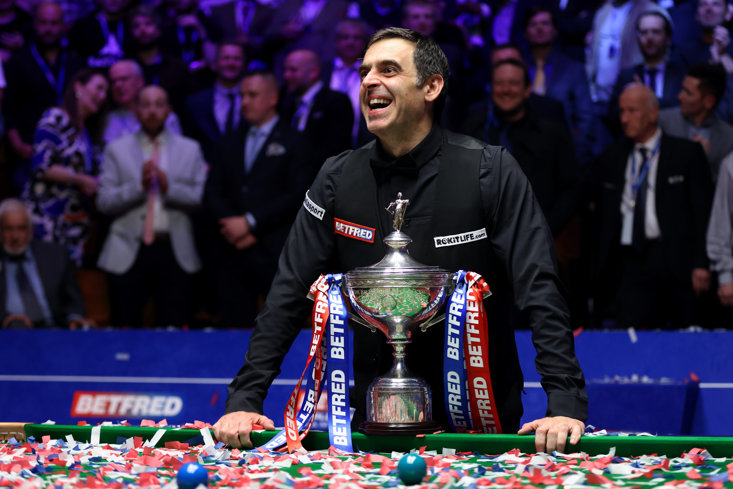 World No2 Trump, who takes on Scotland’s Dean Young on Wednesday afternoon at the British Open, is champing at the bit to get going after a spell with holes in the calendar – but a run of big events now looming ahead.

He added: “It feels like the first event of the season at the British Open. And now is the time to start playing well.

“There are a few big events coming up, with the UK Championship moved forward and the Champion of Champions there as well.

“So it is all starting to happen at once and there won’t be much time now to get going from this tournament, you will be into the next one. But now would be a brilliant time to find some form, and I want to get off to good start in this event.”

Xiao Guodong won a grudge clash with Peter Lines – and insisted the pair were trying to move on from last year’s ugly flare-up.

In the 2012 Northern Ireland Open qualifiers WPBSA players committee man Lines, 52, accused Guodong of cheating, swore at him and even asked him outside for a fight.

Lines was fined £2,500 by the governing body for breaching conduct rules and bringing the sport into disrepute, plus another £4,500 in legal costs.

And in their first contest since Guodong claimed a tense 4-1 win at the British Open in Milton Keynes.

Guodong said: “I think things are finished, the past – we don’t want to talk about it. He got fined and at that time I wasn’t happy.

“But now it’s over because World Snooker did something already and hopefully there will not be another time. Peter and I played, we shook hands today, and hopefully it is okay.

“That time was not very good. I wanted to win, but every tournament I want to win, just like him and other players. It was difficult at the time, but that was just one game.

“I haven’t played for quite a long time, and I felt a bit nervous in this match. It has not been like before when every month we had tournaments.

“Every month we had stops and gaps between playing and its easy to lose some of the feeling.”

John Higgins crashed out to Chinese youngster Yuan Sijun – despite knocking in a 900th career century.

Four-time world champion Higgins, 47, missed chances at match ball in the decider before losing 4-3 to the 22-year-old Yuan in Milton Keynes.

And that came after he had put himself one up with two to play with a magnificent break of 132 to become only the second player after O’Sullivan to hit 900 tons.

A fuming world No5 Higgins said: “It is unforgivable how you can’t close it out like that in the last frame – just unforgivable.”