Judd Trump came back from the dead against Ryan Day as a miraculous recovery saw him into the Masters quarter-finals.

The Juddernaut edged through 6-5 at Alexandra Palace after a tense thriller on Wednesday afternoon – and the 2019 winner will now take on Barry Hawkins for a place in the semi-finals.

But some staggeringly cruel luck plus earlier glaring errors cost Wales’s Day very dear – after he had led 5-3 and seemed on the brink of victory.

Frame nine saw Day miss a simple last red when in to win, and then miss a re-spotted black allowing Trump to close the deficit.

And then world No15 Day missed a black allowing world No4 Trump to clear up and level at 5-5. In the decider as Day, on a break of 17, knocked in a black but then watched on in horror as a red toppled into the centre pocket.

Even then Day had yet another late chance when Trump fouled and left a free ball that could have allowed him .

After doing his best Lazarus impression, a relieved Trump, chasing a first title of the season after a patchy campaign, said: “God. I have lost a lot of close frames this season but that decider would have topped it off after him needing two snookers.

“I was just so relieved to have even got to that point – and after he got me in an amazing snooker, and I left the free ball. I couldn’t believe what I had done.

“And so I almost punched the air when the brown hit the knuckle of the pocket, I would have put all my money on him to clear up there using the free ball to overhaul the two snookers.

“It has been a difficult season and I really had to dig in there. I thought I was on the way home more than once, and I got some luck that can really help you get into a tournament.

“When you are not winning so consistently the belief is not always there and I have had some really bad defeats, missing important balls when it mattered. I was in real trouble when the last red came off the table and onto the floor to leave me 5-3 down.

“But Ryan was extremely unlucky in the decider there. He potted an amazing ball with the first long red, split the pack perfectly and is about to go and win after potting the black and the red goes in. That is where snooker can be so brutal. Ryan should be sitting here having won. 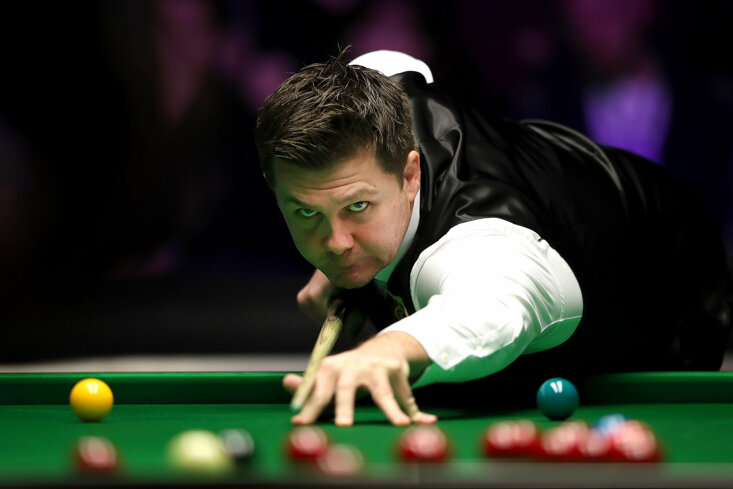 “And at that stage he knew that he should have actually won the match in one of the two earlier frames, so he had done well to compose himself and get in first in the last frame.

“I was edgy, the table was playing heavy and we were both struggling and I never really felt comfortable point in the match.

“He has had chances to win the match, the black in frame 10 was clearly one of those, it rattled in the jaws and if that had gone in it was game over.”

Day said: “I had chances, before the decider and then even later on in the decider another chance after unluckily knocking the red in when potting the black. That was a sickener, though.

“The table was playing very heavy and it was hard to control the cue ball. Judd and I spoke about it at the interval. But I got myself in the winning position and couldn’t cross the line.

“Neither of us played near the level that we can, on the big stage you really want to take the opportunity against the top players if it presents itself and I didn’t.”

Stephen Hendry, in the BBC studio, said: “Judd is smiling like a Cheshire cat down there because he is delighted to get through.

“But he played very poorly today and will have to raise his game if he is to win the tournament. But if you get through a first round like that it can lift you and you can go on.”

Meanwhile Stuart Bingham, the 2020 champion, completed the quarter-final line-up with a 6-3 win over Kyren Wilson.

But Bingham suffered late jitters having roared into.a 5-0 lead and in the end was relieved to get over the line. The 46-year-old, who now faces Shaun Murphy, said: "I thought the snooker gods had turned against me at the end.

"My form hasn't been good this season and when you haven't been winning the demons start coming out. I started with three centuries and an 80-odd, and in the end was just delighted to win."