Judd Trump is looking to topple Ronnie O’Sullivan as snooker’s maximum man. The Juddernaut became the first player to win the Turkish Masters with a 10-4 final win over good friend Matt Selt in Antalya that included a superb 147 break.

It was a first ranking title for a year for world No3 Trump, 32 – and a sixth time he has achieved the feat of snooker perfection.

Rival Ronnie O’Sullivan, nearing the end of his own career, has made the most maximums with 15 in his 30 years on tour – with John Higgins on 12 and Stephen Hendry on 11.

The 46-year-old Rocket has also made the fastest 147 ever seen at the Crucible in 1997 against Mick Price in a time later adjusted down to just five minutes and eight seconds.

But with 14 years in hand on six-time world champion O’Sullivan, Trump – also edging up the ranking title list with a 23rd success – reckons it is within range.

Trump’s latest effort was almost never in doubt from the first couple of balls, and near-flawless positional play saw him coolly progress serenely towards the final black as the excitement levels all around him were going off the scale.

He said: “I can have a go at Ronnie’s 15 maximums. I’ll be playing for a good while and have years on my side, and if I could get one every year or 18 months I’ll be there or thereabouts.

“I certainly hope to hit double figures. I hadn’t actually looked anywhere near getting one all season before Sunday. Then all of a sudden the nerves all left and it was like I was practising.

“It’s not every day that happens and you have to take advantage of it. A lot of the time when you go for a maximum you are shaking and not enjoying it. But this time I really cherished it.

“I felt really good on the maximum in the final, probably the calmest I have ever felt making one or really going for one

“And the reception and reaction for it was amazing, one I won’t forget, which all makes it my best ever along with the position during the break.

“To get one in front of the Turkish fans in the first major tournament they have seen live will, I hope, inspire a few here and make snooker even bigger in the country. 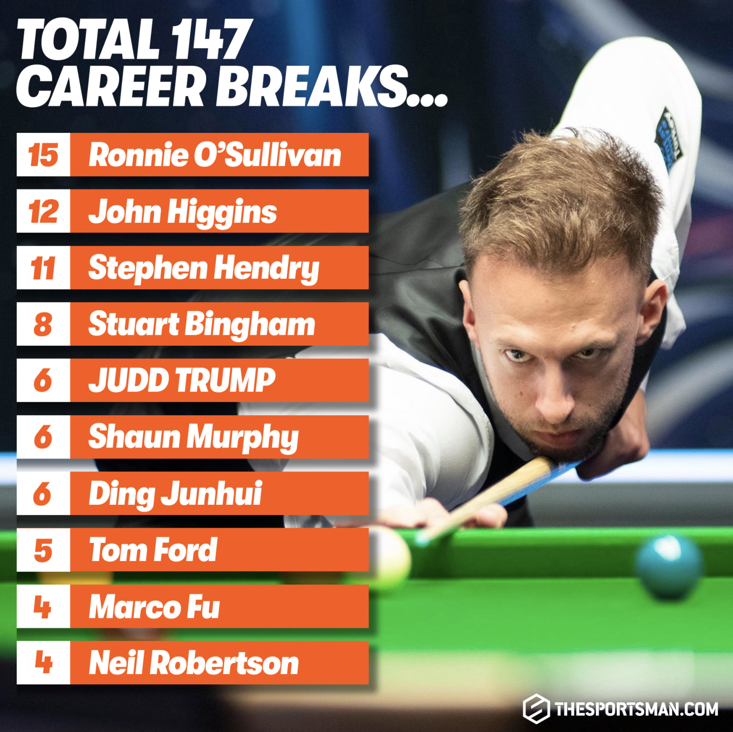 “I was very pleased to get that first ranking title for a year, it is important to keep winning titles and maintain the momentum.

“I did win the Champion of Champions but had suffered a bit in the ranking events. It pushes me right back up on the list.”

The first player fifth-placed Trump can target on the all-time 147s list is Stuart Bingham with a very impressive eight to his name. And only O’Sullivan, Higgins and Hendry lie above the Basildon former world champion.

There have now been 173 official maximums made in professional tournaments since the first one by Steve Davis in 1982 at the Lada Classic against John Spencer that earned him a sponsor’s car.

The youngest player to make one in tournament play was Liverpool youngster and current professional Sean Maddocks at 15 years and 90 days at a Pro-Am series in Leeds.

Higgins is the oldest man to have made one in this season’s British Open at the age of 46 years and 90 days.

Ominously for the rest of the field at next month’s Betfred World Championship, Trump – whose form this season had been patchy – says he is coming good at the right time.

He added: “I felt the best during the second session of the final that I have all season – a lot better and more relaxed than the rest of the week and in recent tournaments.

“It was like I was back to my usual self and feeling a lot more confident. There have been so many matches that were nip and tuck, or where I was behind, and couldn’t get into a rhythm.

“But I was able to find that and get into free-flow mode. It was tough coming straight to Turkey after losing the final in Wales.

“To reach two finals in a row itself is very hard these days, but to top that off with a win was very special – especially because I should have been out a couple of times in the week.”