Snooker
News
The world no.2 claimed that the veteran pundit does not do enough homework on the current crop of players
Hector Nunns
09:58, 07 Oct 2021

Judd Trump has risked reigniting a spat with popular BBC commentator John Virgo by claiming the veteran pundit does not do enough homework on the current crop of players or what happens outside the broadcaster’s three televised marquee tournaments.

Something of a war of words goes back to April of this year before the Betfred World Championship when former Crucible Theatre king Trump claimed that some of the more senior pundits were unhealthily obsessed with the 1970s.

And the world No2, bidding for an astonishing fourth Northern Ireland Open in a row next week, also accused the old guard used in the media of failing to excite and provide more current reference points for millions of younger TV viewers.

Virgo, 75, recently insisted that he is set to be phased out by the BBC and that along with 1985 world champion Dennis Taylor this would be their last season in front of the microphones – culminating in the World Championship in Sheffield.

Virgo, best known at the microphone for shouting what has become almost a catch-phrase “Where’s the cue ball going?”, has been calling matches since 1985 with the broadcaster and also co-presented hit snooker-based gameshow Big Break with Jim Davidson in the 1990s.

The BBC insist no firm decisions have been taken, but pundit Virgo claimed: “Not my choice but I think it’s definite – I think they want people more in touch with the modern player. There are not many shots played I haven’t seen – but nothing lasts forever

“That’s the decision they’re making, so yeah, I haven’t really felt it at the moment but I probably will do come the World Championship. There will be a lot of memories there, memories from when we first went there in 1977. So it will be hard, but nothing lasts forever.”

But on Trump, despite the Juddernaut’s 11 titles won in the past two seasons, Virgo added: “He was disappointing for me last season, and not stepping up to the plate enough in the big events.” 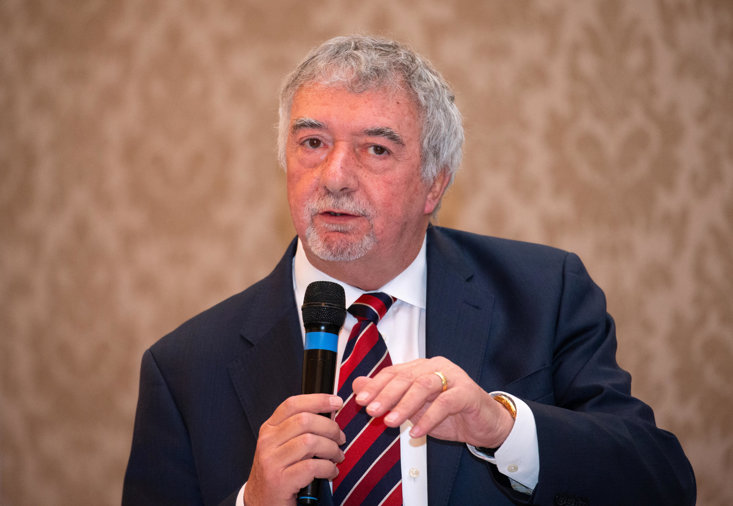 However the 32-year-old Trump, who should regain the No1 spot in the rankings next week, has weighed in once again suggesting Virgo and others do not do enough research.

He said: “It all comes back to some of the stuff I said before the World Championship. A few of the people in and around the game that are trying to promote it are turning up and not doing their homework.

“If I win less than five or six tournaments now, it will be classed as a bad season. This year and last year have been very hard with a lot less tournaments with what has happened.

“It is tough, I don’t see how that can be disappointing. It is his opinion, maybe he is a bit salty after what I said at the World Championship.

“Last season I reached seven finals and won five of them. Apart from winning the six events two seasons ago and Stephen Hendry in his prime, that is probably one of the best seasons ever.

“I don’t know how many times players have reached seven finals and won five of them. That obviously wasn’t good enough for John.”

As the Northern Ireland Open returns to Belfast’s Waterfront after being staged in Milton Keynes last year, Trump is relishing the prospect of bidding for a fourth success on the bounce.

Only Stephen Hendry with five world titles in a row from 1992 to 1996, and Steve Davis with four UK titles from 1984 to 1987, have won the same tournament four times in succession.

Trump, who has beaten Ronnie O’Sullivan in the last three finals, added: “To win three in a row is not something that happens very often. If you are doing that kind of thing, then you are up there with the greats of the game.

“If John Higgins and Ronnie O’Sullivan haven’t won the same event three years in a row, it shows how hard it is to do. Hopefully I can keep the run going for another year, it has been a very special tournament for me.

Although Mark Selby reclaimed the No1 spot this season many still see Trump – due to the sheer number of trophies lifted in the past two seasons – as currently the best player in the world. Trump is not shy of giving his own view – and also insists that his recent foray into nine-ball pool in America will not be a one-off, and that he intends to practice hard and get better.

Trump said: “I still think I’m the best and until someone wins more tournaments in a calendar year than me I will count myself as the best. I think that is the way it should work.

“As for the pool, I’ll go away and concentrate on my snooker now, I will never let pool get in the way of that. But if there is a way I can combine the two of them I will.

“I can put my work in at snooker and maybe after that put in an hour or two at pool as well. If I can try to get to number one in the world at both sports, it would be amazing for me. It is just about setting myself new challenges all of the time.”