Football
News
The Borussia Dortmund man deserves his place on the plane for the Euros this summer
Elliott Bretland
11:00, 28 Mar 2021

However, a player with such talent is ready now and should be on the plane for the Euros. Southgate knows it. We know it. The Birmingham academy graduate now playing with Borussia Dortmund may only turn 18 during this summer’s tournament but will hopefully celebrate his birthday while on international duty. He is too good and right now, England are not blessed with a massive amount of players in central midfield.

"We feel that in that area of the pitch, although we were very happy with everybody tonight, we are a little bit short in numbers,” Southgate said after the win. 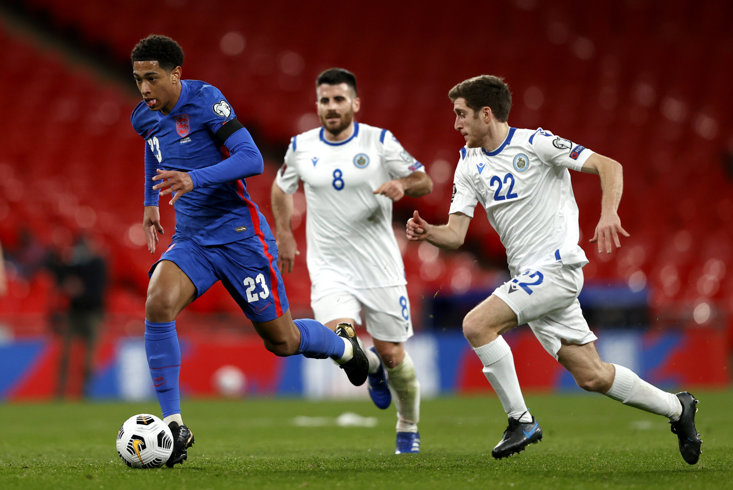 He’s right, while James Ward-Prowse scored his first England goal and impressed, Declan Rice is a brilliant player and Jordan Henderson will be key too if fit, the national team does look short in the middle of the park when it comes to players who will sit and keep things ticking over for the likes of Phil Foden, Mason Mount and Jack Grealish to attack.

"For us to help develop him, to put him into games and to try and get him with the team, with the development he is getting at Dortmund as well, we're hoping we can play a part in fast-tracking him into the group."

Fast-track. That is what is needed and Southgate is right to see the teenager as an important player. Having been allowed to join up with the England team amid Covid-19 restrictions across the globe, Bellingham’s journey from Dortmund will prove beneficial and it is hoped he will feature in Albania on Sunday having come on from the bench against minnows San Marino.

Bellingham plays with an authority which belies his years and a boundless energy found in one so young. He is versatile, adept at clearing up and retrieving possession with plenty of guile and industry as well as getting on the ball and attacking with verve.

Southgate is blessed with an embarrassment of riches in many positions this season but could be reliant on the youngster for this summer’s tournament. England have been there before with an 18-year-old Wayne Rooney running the show at Euro 2004. While Bellingham won’t be as influential or integral perhaps, he will be needed to keep the cogs turning.

If you’re good enough, you’re old enough and Jude Bellingham is, certainly when it comes to taking on Albania.