Football
News
Whoever lands the 21-year-old could have something special on their hands
Harry De Cosemo
14:55, 01 Mar 2020

When Brendan Rodgers left for Leicester City last season, there were some concerns that Celtic's best years were coming to an end. Due to Rangers’ financial meltdown and liquidation in 2012, there has been very little challenge for much of the last decade in Scotland. It means it's hard to really measure success north of the border but Rodgers’ exit and Steven Gerrard’s growing reputation at Ibrox meant, for the first time in years, there were doubts being cast.

During the Rodgers era Celtic defended a treble of domestic trophies and were well on course to do it again before the King Power Stadium came calling. They were used to winning anyway, but doing so under the stewardship of one of Europe’s brightest coaches and with the players they had made that time feel different.

In the Scottish Premiership there is a ceiling, which is why Rodgers and star striker Moussa Dembele before him, ended up leaving. But it felt as though if anyone could take them further, it was him. Neil Lennon, who had left his own mark as manager before, stepped in to guide them over the line. The ‘treble treble’ was complete, but Lennon had his limitations despite taking the job on full time; Gerrard’s time was coming, everyone thought.

Yet Rangers’ title bid has fallen off a cliff again; they are 12 points adrift of their Old Firm rivals. Lennon deserves credit for his work, but he has a very talented squad at his disposal. The Rodgers effect has lasted over a year after his reign. Odsonne Edouard is almost certain to be the next big-money departure, while Callum McGregor is catching the eye too.

Both have, almost inevitably, been linked with Leicester ahead of the summer. Someone who has gone under the radar somewhat, possibly because of the position he plays, is defender Kristoffer Ajer. Making profits on players by selling them to English and indeed European clubs is nothing new. Victor Wanyama, Fraser Forster, now back at Celtic Park, Kieran Tierney and Dembele are just a few who have moved on for a huge profit.

Their greatest export is without doubt Virgil van Dijk; he joined Southampton in 2015 before going on to Liverpool for £75million, winning the Champions League and being named UEFA’s Player of the Season for 2018/19. Ajer must use Van Dijk trajectory as inspiration; while the Dutchman continues to set standards that are well above most players’ reach, the path has been laid already.

Celtic’s current big central defensive hope is only 21 and not as physically imposing, but he is the ideal modern incarnation of a player in his position. Far from uncomfortable stepping into midfield, he is great at playing out from the back, with good close control and a decent passing range. He even showed he has an eye for goal by opening the scoring in the recent 3-1 win over Kilmarnock. 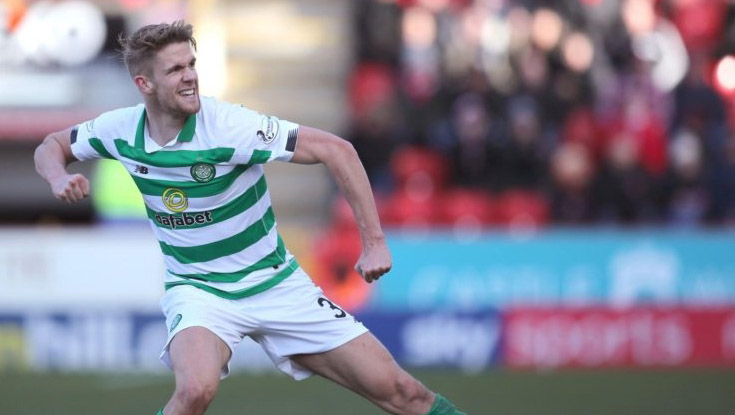 The step up to Premier League level is daunting, but Ajer is showing a readiness demonstrated by a number of others before him. Football in England is changing in the Norwegian’s favour. While it may be a huge risk for a team such as Arsenal or Tottenham Hotspur to swoop, given the gulf in expectations put upon players between those clubs and someone like Celtic, his style is suited to the biggest sides.

Most teams in that division aim for at least one ‘ball-playing’ defender nowadays; Van Dijk climbed the ladder to the very top, and Ajer is almost at the stage where he should be thinking of his next step. Leicester again are in the mix, especially if Caglar Soyuncu attracts concrete bids after an impressive campaign, while Everton and even Wolves have been linked. Interest will be real and hard to resist, both for the Hoops and Ajer himself.

Celtic can only achieve so much in Scotland; they are as dominant as they can be right now in that league. Because it lacks a truly competitive edge, it is hard to make that next step in continental competition, which may - in part - be to blame for their Europa League exit. But Keeping hold of their best players has been difficult, and they’ve done their best to incorporate sales into their structure.

As a result, there is a tinge of sadness about them, because they are among the most traditional and historic clubs in the world, with a great stadium. Glasgow is a great place to learn a footballing trade, as Ajer and others are finding out. Edouard is strong, quick and lethal; he has everything to make it as a top striker and, crucially, his goals are gaining him attention.

Perhaps Ajer is going under the radar as a result, but that won’t stop interest growing; his stock is rising by the week. His future is bright, and there will be a scramble for his signature soon; whoever gets him could have something special on their hands.