Football
News
For the Spurs striker, with a history of ankle injuries, the prognosis once again looks bleak
Jack Porter
11:49, 29 Jan 2021

We knew it was coming. It was literally a double blow. The first a shot to the right after a ridiculously clumsy Thiago Alcântara lunge. He was down on the turf, receiving relatively extensive treatment. But he continued on. And then it happened again. Following a challenge by opposition captain Jordan Henderson, the other ankle took the hit.

On Friday morning, Fantasy Premier League players everywhere were left bereft. Tottenham Hotspur talisman Harry Kane, with his side 1-0 down to Liverpool, was forced out of the game. Spurs would eventually lose the match in N17 3-1. The defending champions’ first win in six matches moved them back into fourth place and four points above Spurs.

But, for the England captain, with a history of ankle injuries, the prognosis once again looks bleak. Not only has his side fallen away from the title race -  they’re now eight points behind league leaders Manchester City - the update from his manager José Mourinho in the aftermath of the events at the Tottenham Hotspur Stadium was far from positive.

It couldn’t have come at a worse time for Kane, for Mourinho, for Spurs. In the game, and the season. The worse thing probably is; it wasn’t unexpected. 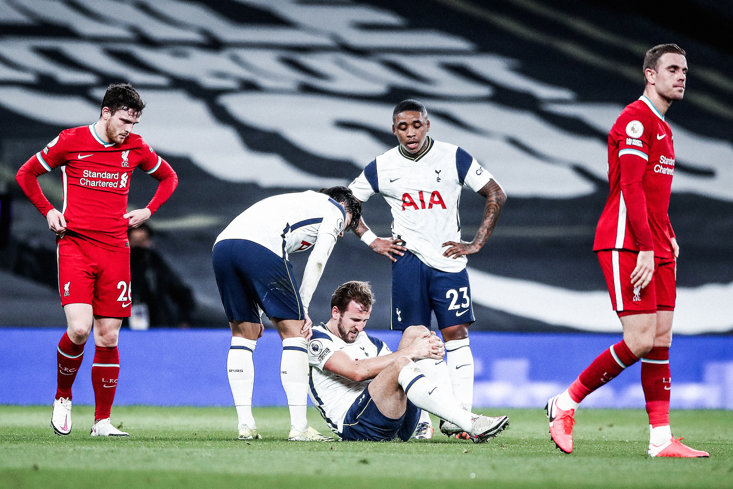 Kane has contributed towards 23 goals in 19 Premier League appearances this season. Alongside teammate and partner-in-crime Son Heung-min, he is the second-highest goalscorer in the division. When Kane crossed for Son to score and put Tottenham Hotspur 2-0 up against Leeds United the pair matched a Premier League record of more than 25 years. On 2 January, just before half-time in the eventual 3-0 win, they collaborated towards a goal for a record-equalling 13th time this season, equal to the number achieved in an entire season by Alan Shearer and Chris Sutton for Blackburn Rovers in their title-winning season of 1994/95.

But now that prolific partnership will have to wait, and with key fixtures against fellow top-half opposition Chelsea, Man City and West Ham in three of their next four gameweeks his absence comes in a testing period for the Lilywhites. The North London Derby on 13 March against a resurgent Arsenal will be the fixture most fans will currently be examining with intent on the calendar, with Mourinho confirming that Kane will be out for “a few weeks”.

It is a prevailing narrative. Since streaking into the Spurs setup in the 2014/15 season under Mourinho’s predecessor Mauricio Pochettino, Kane has now suffered significant personal setbacks in five of his seven seasons, going back to yet another ankle injury in 16/17. Other impairments have included ligament injuries, and a significant thigh muscle rupture that helped blight Mourinho’s attacking options last term. The task will now likely be given to summer signing Carlos Vinícius, relatively unproven in these English waters but the recipient of the Bola de Prata for his 19 goals in the 2019–20 Portuguese Primeira Liga, to step up to spearhead in the Kane void for the foreseeable future.

“[Kane’s] second injury was worse than the first one,” Mourinho commented after the Liverpool defeat, “For Harry to leave a game when the team is losing is not a nothing injury. For how long, I can’t tell you. I don’t know, we will have to wait and see.

"But two injuries in both ankles, the second one worse than the first one - a few weeks, I don't know.

“There are some players you can't replace.”