Katie Taylor is fond of making history and the Irish World Champion will do so again when she steps into the ring in Manchester this November.

Taylor, now 33, will bid to become a two-weight World Champion, when she meets Christina Linardatou on November 2, headlining a stacked card featuring top talents like Anthony Crolla and Joshua Buatsi. The undefeated champion has earned her spot at the top of the bill at the Manchester Arena, with 14 straight victories as a professional.

Speaking to The Sportsman, down the road from our HQ in Manchester city centre, Katie said: "I am now headlining a huge show and women's boxing has come a long way. Ever since I turned pro I have had the opportunity to be involved in these huge, huge shows and its brought a lot of attention to the sport.

“I have the chance to become a two-weight world champion, which is phenomenal for me, it’s history-making for me. Christina is a fantastic champion, and this is a huge challenge and I can’t wait to show everyone what I’ve been working on over the last few months.

“It’s a new challenge moving up in weight, I’ve worked very hard in the gym to build up. You’ll see the very best of me. l’ll need to be on my game because I think Linardatou is the number one at 140lbs.

“I want to make history in this sport, I want to be the best ever. Professional boxing is made for me, I’ve always dreamt of boxing in front of thousands and thousands of people in these big stadiums.

“I’m going to enjoy it and give it everything I have.

“I’m excited to fight in the UK, I love it, and the support I’ve got has been outstanding, I’m so grateful for that. It’s my first time in the ring as undisputed lightweight champ so it’s going to be a special night.”

And the Irish icon insists that the best is yet to come for women’s boxing.

She said: “We’re still fighting for equal pay but I’m definitely making a lot more money than I thought I would when I started three years ago. So in that respect we’re breaking down walls and barriers.

“It has come a long way in the last few years and the best is yet to come.” 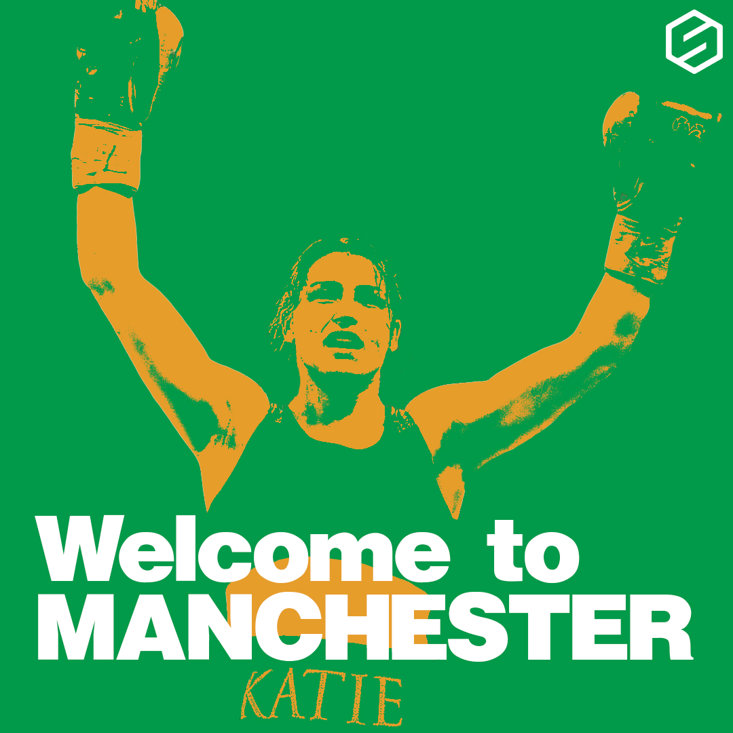 And Katie was able to neatly illustrate just how far the women’s fight game has come as she told The Sportsman how she used to masquerade as a male boxer when she was younger, in order to get competitive rounds.

She said: "When I first started fighting there was no female boxing allowed in Ireland at the time. To get any competition or any fights, I had to put the headgear on and just pretend I was a boy. I was known as 'K. Taylor'.”

After causing an uproar with the local authority, Taylor travelled overseas to pursue her passion and became an internationally recognised amateur champion. Irish female boxing was eventually sanctioned in 2001, allowing the girl from County Wicklow to come home to ply her trade.

The persistent pugilist then took it one step further, becoming an instrumental figure in the legalisation of women's Olympic boxing. After lobbying Irish and Olympic committees, she was invited to Russia and the USA to showcase her skills.

She says: "It was one of the biggest pressure situations of my career. It was always a dream of mine to fight in the Olympic games and to win a gold medal.

"Since I started boxing, I wanted to change people's perception of the sport. I wanted to break down a lot of barriers and a lot of boundaries.

"I was chosen to fight in front of the committee, and I was told before that this fight would determine whether women's boxing would be in the Olympic games, so it was a huge, huge fight. Thankfully it went well, and they were impressed, and now women’s boxing is here to stay in the Olympic Games.”

Her promoter, Matchroom Sports boss Eddie Hearn, believes Taylor's role in magnifying the sport of women's boxing has been huge. Speaking to The Sportsman he said:

“Firstly, introducing women’s boxing to the Olympics, she’s responsible for that.

More
boxing
George Foreman Says Deontay Wilder Will Beat Tyson Fury And...
Former two-time world heavyweight champion George Foreman has stepped in to give Deontay Wilder some [ ... ]
boxing
Fight Fans Rejoice! Canelo And Golovkin In Talks For September...
Mexican superstar Saul ‘Canelo’ Alvarez and Kazakhstan’s tough-as-nails Gennady Golovkin [ ... ]
boxing
Usyk Aiming To Be The Spanner In The Works For Potential Fury...
Oleksandr Usyk is the man looking to ruin the biggest fight in British boxing history and scupper any [ ... ]
boxing
After Defeat To Tyson Fury, Deontay Wilder's Aura Of Invincibility...
Former Mike Tyson trainer Teddy Atlas has compared Deontay Wilder to a ‘spoilt brat’ insisting [ ... ]
boxing
Dereck Chisora Sees A Big Mountain To Climb Against ''Boy’s...
Amongst the headlines of Corona-this and Corona-that, you might have missed the announcement of a blockbuster [ ... ]
boxing
Usyk, The Ultimate Road Warrior, Will Relish Fighting Chisora...
The supremely-gifted Oleksandr Usyk will visit these shores once more as he looks to defend his unbeaten [ ... ]
boxing
Former US Marine Stands In The Way Of Frampton Becoming Three-Weight...
Carl Frampton is looking to become a three-weight world champion this summer as a fight with WBO [ ... ]
boxing
Jono Carroll Promises To Break Scott Quigg's Heart Ahead Of...
This weekend, the Manchester Arena will welcome a tasty super-featherweight clash between [ ... ]
boxing
Taylor Set For ''Biggest Female Fight Ever'' Against Seven-Weight...
Katie Taylor’s fight with Amanda Serrano has been billed as "the biggest female fight of [ ... ]
boxing
''If It Makes Money, It Makes Sense'' - Floyd Wants $600m To...
Floyd Mayweather has insisted it will take a whopping $600m to get him back in the ring to fight Conor [ ... ]
boxing
Tyson Fury And Anthony Joshua All Set For Cardiff In December,...
It’s the fight we all want and it may have taken a giant step closer to happening after Eddie [ ... ]
boxing
Born In Watford, Made In Nigeria: Anthony Joshua's Incredible...
2019 was arguably the most formative of Anthony Joshua’s career.  The first professional [ ... ]
boxing
Dillian Whyte Promises ''Maximum Violence'' In Manchester Showdown...
Ten months after taking the WBC interim heavyweight title with a win over Oscar Rivas, Dillian Whyte [ ... ]
boxing
Book Review: In Sunshine Or In Shadow, By Donald McRae
You may recognise the title of this book. You may even have belted it out yourself.  “In [ ... ]
boxing
Scott Quigg Eyeing Two-Weight World Title Shot After Jono Carroll...
Former WBA world super-bantamweight champion Scott Quigg says he’s treating Saturday’s Manchester [ ... ]
boxing
Deontay Wilder-Tyson Fury III To Happen ''Before The Olympics''
Tyson Fury is set to face Deontay Wilder for a third time before this summer’s Tokyo Olympics [ ... ]
boxing
Tyson Fury Gives ''Mate'' Joseph Parker Heavyweight Advice Ahead...
Joseph Parker backed the right horse. The former WBO heavyweight champion chose Tyson Fury to overcome [ ... ]
boxing
Could Boris Johnson Really Be The Man To Make AJ Vs Fury Happen...
Boris Johnson has a lot on his plate right now, he is the Prime Minister after all. Having won the general [ ... ]
boxing
Eddie Hearn Braced For A ''Mexican War'' As Mikey Garcia And...
Eddie Hearn says he is expecting a “Mexican war” this weekend when Mikey Garcia and Jessie [ ... ]
boxing
Volcanoes, Hypnotists And Broken Toes - Boxers Love A Good Excuse
Think boxing excuses are getting wilder and Wilder? Think again. Pugilists have provided pathetic pleas [ ... ]
boxing
Inspired But Ill-Fated - Deontay Wilder's £31k, Three Stone,...
There are excuses and then there are excuses.  Few wouldn’t have expected Deontay Wilder [ ... ]
boxing
Suits, Fouls And Towels - Deontay Wilder Lays The Blame On Everyone...
Deontay Wilder has blamed a number of external factors, including his elaborate pre-fight costume, for [ ... ]
boxing
The Things You Might Have Missed As Tyson Fury Battered Deontay...
Tyson Fury put in one of the best boxing performances from a Brit in the United States as he stopped [ ... ]
boxing
The Ex-Crime Reporter Turning Wilder Into The World's Most Dangerous...
There was the story of a man and woman who met at a bar. One went down for attempted murder after stabbing [ ... ]
boxing
The Winner Of Fury Vs Wilder Should Fight Anthony Joshua, Says...
Former WBO world heavyweight champion Joseph Parker has weighed into the conversation as to who the [ ... ]
boxing
Deontay Wilder Vs Tyson Fury Rematch Turns A Corner As The Trash-Talking...
The tide has turned. The niceties between Deontay Wilder and Tyson Fury are well and truly over. Just [ ... ]
boxing
Strength, Speed And Surgery: The Story Of Deontay Wilder's Sensational...
Frankenstein. That’s the name Deontay Wilder has for his right arm. Those in the know call it [ ... ]
boxing
Forget Amir Khan, Kell Brook Now Has Bigger Fish To Fry. Errol...
Kell Brook knew just how big his comeback fight against Mark DeLuca was. He was under no illusions. [ ... ]
boxing
From The Tailor To The Architect - Meet The Tyson Fury Team...
When it comes to Saturday night’s big fight, it will just be Tyson Fury in the ring. The pressure, [ ... ]
boxing
Balance In And Out Of The Ring Is Key For Tyson Fury Ahead Of...
Inside the ring and outside the ring, Tyson Fury’s fight with Deontay Wilder is all about balance. [ ... ]
This website uses cookies
Cookies help us and our partners provide statistics. By browsing this website, you consent to the use of cookies in accordance with our Privacy Policy and Cookies Policy.
Accept & Close