Manchester City’s world class midfielder Kevin De Bruyne celebrated six years with the club this week. It has been an era of incredible achievement for the player and his team, with the Belgian claiming endless individual and collective honours along the way.

The Cityzens find themselves emerging from the transfer window without signing a centre forward, after Etihad icon Sergio Aguero left for Barcelona. Tottenham Hotspur would not be moved over Harry Kane, while Cristiano Ronaldo favoured a nostalgic return journey to Manchester United over an antagonistic trophy hunt with Pep Guardiola’s side. However, with City now opting for a false 9 more often than not, the diverse attacking talents of De Bruyne are perhaps more crucial than ever.

Ferran Torres has been deployed in the nominal centre forward role this season, with Gabriel Jesus’ long-term future at City seeming to be as a winger. But De Bruyne himself has experience operating in a false 9 role, as Guardiola has experimented with going striker-less on a few occasions down the years. With Aguero making only sporadic appearances in his final City campaign last term, the former Chelsea man found himself rotated into the attacking spearhead slot. De Bruyne, Raheem Sterling, Phil Foden, Torres and Bernardo Silva all took turns leading the line.

When called upon, De Bruyne filled the role with distinction. He was Man of the Match in January’s 3-1 win at Stamford Bridge, getting on the scoresheet. The ex-Wolfsburg star was entrusted with the striker slot in the Champions League final, also against Chelsea, but was substituted on the hour with a head injury in a game his team would go on to lose.

With Torres as Guardiola’s first-choice, De Bruyne can still be vital to the system. As one of Pep’s vaunted “free 8s”, the support of the full-backs gives De Bruyne the freedom to either overlap and provide crosses from wide, something Torres has proven he can thrive on. Or there is the chance to underlap, and cut into the centre forward position with Torres dropping deep. This flexibility makes City a difficult proposition for any defence, and suits De Bruyne’s skillset down to the ground. 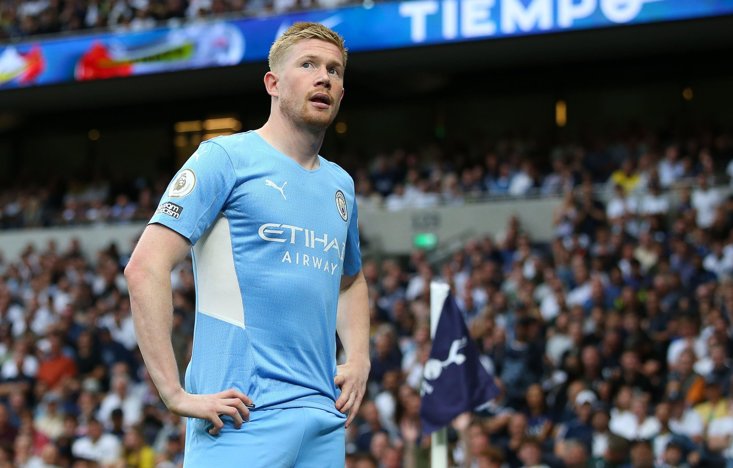 The key to making this tactic work will be keeping De Bruyne fit. The midfielder picked up an ankle injury during Euro 2020 that has nagged him ever since. He played on in the tournament, and made an eleven-minute cameo in City’s season opener with Spurs, but has not played since. It is hoped the player will recover in time for the 11th September away game at Leicester City.

In his absence, City are coming off a pair of 5-0 victories, over Norwich City and Arsenal. While it would be easy to claim his club are doing fine without him, against sterner opposition there is the impression that De Bruyne’s creativity, invention and positional flexibility would be a huge benefit. With De Bruyne limited to a brief substitute appearance against Spurs, City lost 1-0. It is not hard to envisage a fully-fit and firing ‘KDB’ making a difference in that sort of game.

Kevin De Bruyne is rightfully a club legend at Manchester City. In a week where the club erected statues to commemorate the achievements of two of his former teammates, Vincent Kompany and David Silva, it is not inconceivable to imagine the Belgium international being added to the installation one day. But at 30 years of age, he also has plenty to offer in the here and now.

Once he has put his nagging ankle problem behind him, the City-sans-strikers that Pep Guardiola is building is a great fit for his style. Whether as the point of the attacking trident, or in a dangerous role further back, De Bruyne can once again be a player opposition defences fear this season.