Football
News
The striker scored the only goal of the games as the Foxes beat Southampton 1-0
Elliott Bretland
20:28, 18 Apr 2021

Kelechi Iheanacho continued his stunning form in front of goal to fire Leicester City into the FA Cup final. The striker netted his seventh strike in ten games as Brendan Rodgers’ men defeated Southampton 1-0 in Sunday’s semi-final at Wembley.

The Nigerian scored with the first shot on target of the game on 55 minutes to send the Foxes through to their first FA Cup showpiece since 1969. Leicester, who will face Chelsea on May 15, will be looking to win the competition for the first time in their 137-year history.

Defeating Southampton to make the final further reiterates the massive strides the Midland club has made since their shock Premier League title triumph of 2016. Yes, they may be faltering in the league but the very fact they are in the hunt for the top four again after losing out on the final day of last season just shows they are capable of a sustained assault on the top six. 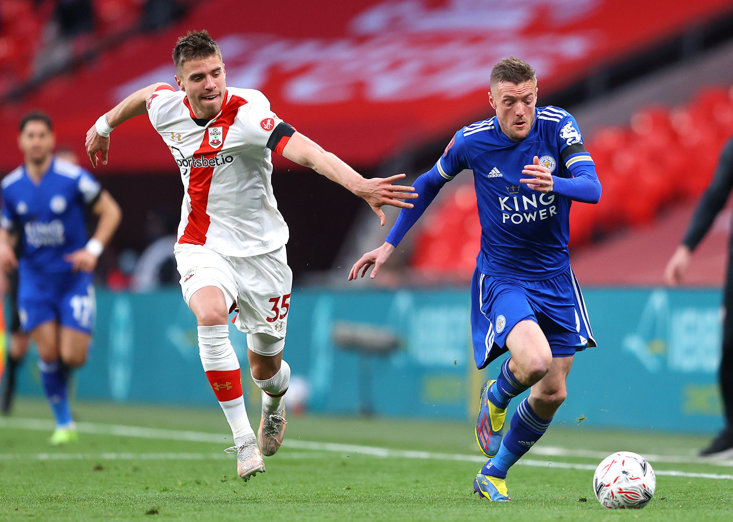 Heading into this fixture they are above Chelsea, Liverpool, Tottenham and Arsenal and defeated Manchester United in the quarters to reach the last four. There may be a feeling of disappointment and trepidation for the rest of the season after the Foxes saw their hold on third place cut to just a point after losing at West Ham but reaching the Cup final will put smiles on Leicester faces.

Here on Sunday, Southampton, who topped the league table in November but have been in freefall since and sit in 14th, they toiled again but it was clear it was Leicester who had the quality to go through.

After a fairly forgettable first half as both sides struggled to get into the game, it was Leicester who went ahead. Jamie Vardy stormed down the left-wing and cut the ball back into the box for Iheanacho. The forward’s shot was blocked by Jan Bednarek but fell perfectly back to him and he made no mistake with the follow-up.

Southampton laboured through but looked beaten. Rodgers’ side nearly doubled their advantage to kill the tie off after excellent hold-up play by Iheanacho who released substitute James Maddison but the midfielder skewed his shot high over the bar.

In truth, you don’t deserve to reach a final after failing to record a shot on target in the semis and Southampton will be left to rue an opportunity wasted. Leicester only managed one accurate effort too but it went in and they are through.

Just like May 2016, there may be a reason for plenty of cheer come May 2021. Trophies are difficult to come by, just ask the likes of Aston Villa, Everton, Leeds and Newcastle, clubs whose barren runs grow greater and greater with each passing season. So for Leicester to have a shot at the FA Cup is just reward for a team on the up.