Kell Brook has wanted to feel this feeling for over ten years of his life. He watched as Amir Khan, the national celebrity, the Olympic silver medalist, was fast-tracked to headliner status. Khan was headlining arena shows and winning world titles while Brook had to toil in his shadow. Brook would win a world title of his own, and both men ended their careers with a lot of pride in their achievements. Until tonight. Tonight, ‘Special K’ stopped ‘King’ Khan in six rounds of an utterly majestic night of boxing.

When it was announced, people said it had come too late. They feigned disinterest. They downplayed its significance. By the time fight night arrived, this felt every bit as special as Nigel Benn vs Chris Eubank, Lennox Lewis vs Frank Bruno or Carl Froch vs George Groves. This was a true British grudge match, and a nation watched and waited for one man to emerge victorious.

There was pre-fight drama, as Brook was ordered to change his gloves. Reportedly there had been a dispute over the Sheffield fighter not wearing the contracted equipment. In an unconventional move, these were changed in the ring while Khan made his entrance, flanked by shared former foe Terence Crawford.

The pair were reluctant to touch gloves, an expected affectation after a decade of bitterness. Khan began on the back foot, but there were timely reminders of the speed that took him to the top of the world. The Boltonian established his jab early, but Brook backed up his foe and staggered him with a crisp straight right hand. The former light welterweight champion beckoned his tormentor on. Often the build-up to a fight is overworked, nothing more than marketing. Not tonight. This was war.

The second saw Khan start in more wary fashion, but he got a solid left hook in early. This time, when the Sheffield man backed him up he responded with slashing hooks and danced from range. Just when it looked like Khan had gained a footing in this extraordinary fight, Brook cracked him with a vicious and hurtful right hand. 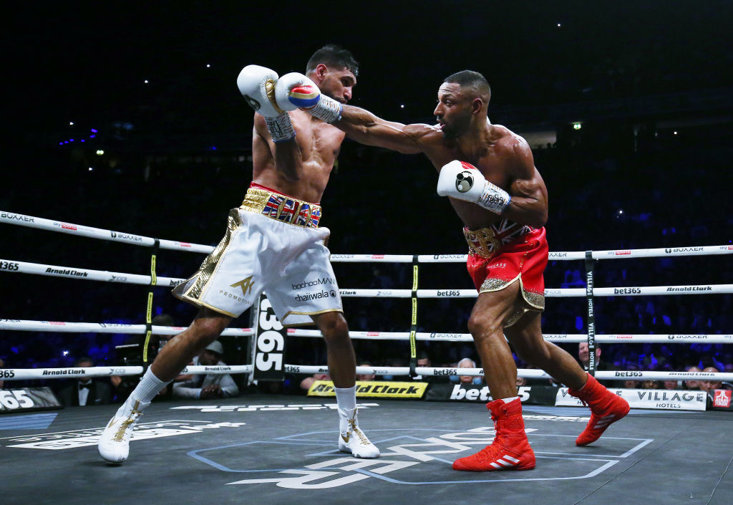 The frenetic pace was always likely to drop from the feverish heights of the opening stanzas, but the more sedate nature of the third round wouldn’t last. Once again it was Brook’s right hand that broke the status quo, and Khan ended the round in big trouble. The Olympic silver medalist held on as ‘Special K’ tried to create openings. Advantage Brook.

Sensing his crowning night was slipping away, ‘King’ Khan was straight on the former welterweight champion at the bell. The Brook right hand figured into matters again, but this time it was crisply countered by Khan. A concussive blow right on the clapper had Khan on the defensive as a furious fourth drew to a close.

Brook demonstrated some of the boxing acumen that took him to the top of his sport in the fifth session. The Sheffield fighter used slick body movement to keep out of range of Khan’s jab, before going through the gears mid-round. Kell was picking his shots superbly at this point, stalking his victim and opening up in the same way we saw against Shawn Porter eight years before.

Finally this merciless battle of wits and wills came to an end. Brook rocked Khan for what felt like the dozenth time as the round began, and this time he would not let up. There would be no comeback for Khan, no second, third or fourth wind. With the Bolton man taking endless punishment, the referee waved off this most remarkable of contests.

The true significance of this fight in the welterweight landscape is a matter for another day. This was not about world titles, rankings or next steps. This was about two rivals, two men who genuinely loathed each other, finally getting a chance to fight. This fight has bubbled under for over a decade. Tonight, Brook and Khan can sleep easy knowing their eventual meeting was worth every minute of the wait.