It’s been another busy week in the world of boxing. From a middleweight showdown on the horizon to a heavyweight rematch that might not happen any time soon, here are five stories you might have missed.

Promoter Eddie Hearn has declared that he's made a "significant offer" to Kell Brook to fight Conor Benn next. However, while the Matchroom boss says he would be willing to make the fight in June, he conceded it would take a “ridiculous amount of money” to convince Brook to return to the ring.

“I’ve been talking to Kell Brook and his dad, and stuff like that,” Hearn told iFLTV. “I won’t get into it too much but we’ve made them a significant offer to fight Conor Benn.

“I think with Kell, if he fights again, he should and would do it sooner rather than later. Once he starts enjoying himself and relaxing, the weight comes back on, it becomes more of a mission. Where right now he looks like a million dollars, he’d be ready to fight in June.

“But I think, at the same time, it’s gonna take a ridiculous amount of money to get him back in the ring because he doesn’t really need it and I reckon he’s thinking to himself, and his dad’s thinking, ‘well, if the money’s crazy, I’ll do it and if not, we’re happy’

“It’s important that they’re happy. We’ve just tried to say ‘look, if you’re ready to go in June, we’ll hold our April 16th fight,’ but that doesn’t look to be the case and looks like we’ll progress with April 16th. But we’ll carry on talking with Kell and hopefully we’ll find some middle ground and make the fight for September or October.”

Gennady Golovkin’s middleweight unification bout with Ryota Murata will finally go ahead after being confirmed for April 9 in Japan. Golovkin will put his IBF and IBO world title belts on the line against two-time WBA middleweight champion Murata, who will be fighting on home soil at the Saitama Super Arena. The fight was originally scheduled for December 29th, but was put on hold due to the Omicron outbreak.

"I am glad that the date has finally been set. I would like to express my gratitude to the organisers from Japan for their hard work and full support of the upcoming unification fight," said Golovkin.

"Ryota Murata is an outstanding champion. I believe that boxing fans from this beautiful country and around the world will see an exciting event. I look forward to getting back in the ring and bringing the Big Drama Show to Japan."

Usyk Vs Joshua In Doubt Due To Russian Invasion Of Ukraine

Ahead of his scheduled rematch with Anthony Joshua, heavyweight champion Oleksandr Usyk has said that he doesn’t know when he will box again due to the Russian invasion of his Ukrainian homeland.

The WBO, WBA and IBF strap-holder dethroned AJ at the Tottenham Hotspur Stadium in September, with Joshua activating the rematch clause in his contract. However, Usyk is now enlisted in Kyiv’s Territorial Defence and a rematch with the British boxer looks likely to be put on hold for the time being.

Speaking from the Ukrainian capital, Usyl told CNN. “I really don’t know when I’m going to be stepping back in the ring.

“My country and my pride are more important to me than a championship belt.”

British boxing is set to return to free-to-air TV following news that Wasserman Boxing have signed a multi-event deal with Channel 5. 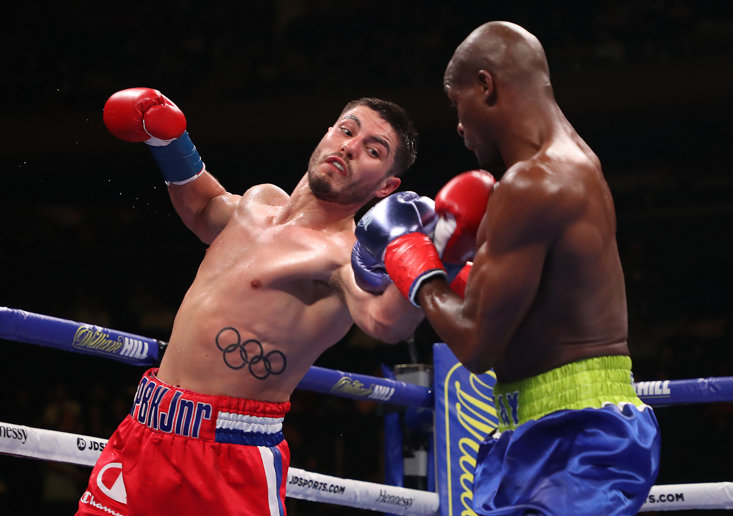 “This is a major move that is going to revolutionise free-to-air boxing in the UK,” said Wasserman Head of Global Boxing, Kalle Sauerland.

“We all know the brilliant numbers that Channel 5 does with boxing and we feel with these great partners we can take this to a whole new level… expect a surprise or two in the build ups. We can't wait to get started.”

The boxing community has been pretty much unanimous in its condemnation of the result of last weekend’s super-lightweight showdown between Josh Taylor and Jack Catterall. Taylor was given the nod in Glasgow on Saturday night, although many believe Catterall was a clear winner.

Peter Fury, who trains Hughie Fury, his son, and Savannah Marshall, is the latest to blast last weekend’s sour scoring. The trainer, who is also uncle to lineal heavyweight champion Tyson Fury, insists that the judges responsible for the decision in Scotland should be fired.

“How do they score fights like that?,” Fury told the Betfred Lightweight Boxing Show. “It was a complete robbery. And listen, you judges watching, you need the sack, mate.