Sports
News
The Olympics brought us some fantastic moments, but which were the standouts
Kris Voakes
08:50, 10 Aug 2021

The Tokyo 2020 Olympic Games might be over but they have left The Sportsman’s team with plenty of memorable moments.

It was the most stunning of rides, and the perfect way for Britain’s greatest Olympian to cap off another phenomenal fortnight for Team GB. The reigning champion collected his seventh career gold by sprinting away from the pack immediately after the pacing bike had left the track in the men’s Keirin final, holding on to win by some distance.

It was as brilliant as it was ballsy. 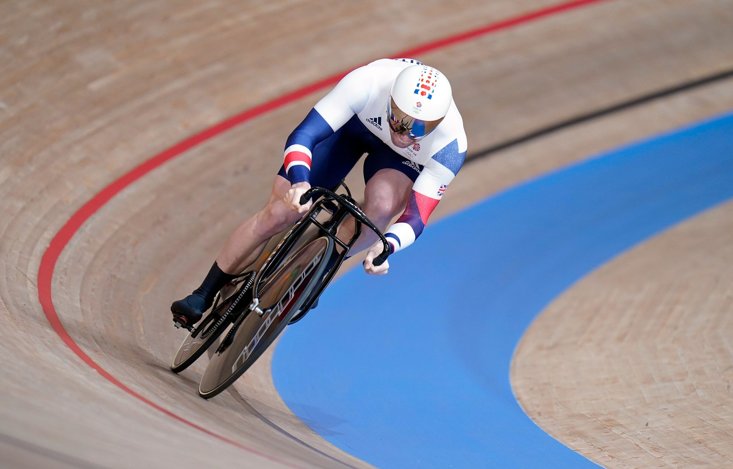 What an inspirational young woman she is. After twice failing with a kickflip indy, 13-year-old Sky landed the move at the third time of asking to collect a magnificent bronze medal in skateboarding’s debut at the Olympics.

She became Britain’s youngest ever Olympic medallist thanks to that, too.

Not everything went to plan in the debut for skateboarding, with one cameraman paying the price for not being quite up to speed with the newly-added sport.

When Australia’s Kieran Woolley was reaching the end of his men’s park preliminary he slightly over-balanced and went crashing into a rather-too-close camera operator. Thankfully both were ok, but for a few moments it stunned everybody in the arena, with Woolley immediately checking the prone journalist was ok.

The 17-year-old went on to finish fifth in the event.

Olympics
@Olympics
Only 2⃣ athletes have ever been able to sweep both the 100m and 200m in consecutive Olympic Games:
Elaine Thompson-Herah and Usain Bolt. 💪
#JAM 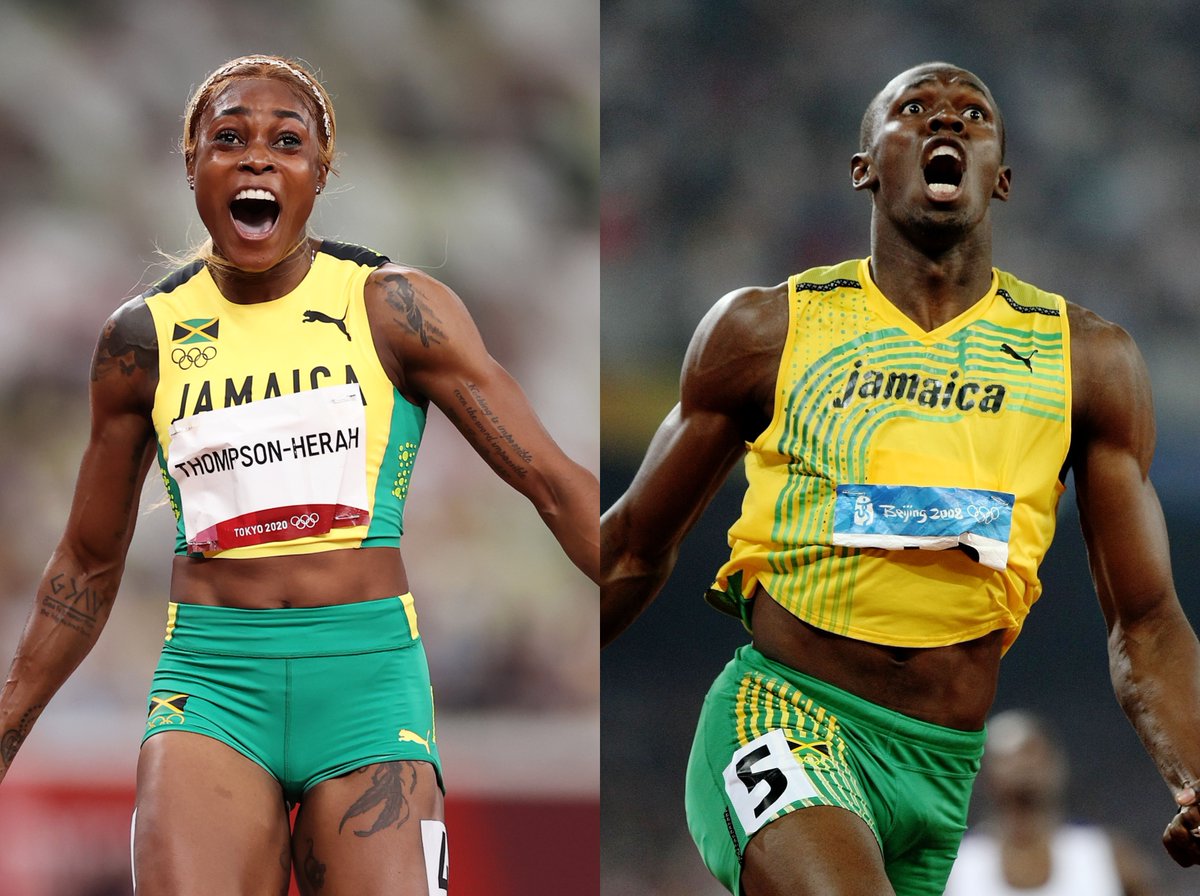 Jamaica’s sprint hopes were supposedly dealt a huge blow by the retirement of Usain Bolt, but Elaine Thompson-Herah picked up the metaphorical baton.

Having already defend the 100m gold, she went on to record the same feat in the 200m with a stunning run in 21.53 seconds, becoming the first female and only the second person ever to defend both sprint crowns.

The other person to achieve that feat? Usain Bolt, of course.

If you hadn’t heard of Emily Campbell prior to the Olympic weightlifting, you’re forgiven. The participation of Laurel Hubbard, the transgender athlete from New Zealand, caused so much controversy that the remaining contenders for the women’s category were given little air time.

So Campbell’s silver-medal display came out of the blue for some, but she was a more than worthy runner-up to China’s Li Wenwen. And that scream of joy when she realised she’d won an Olympic silver medal was truly magnificent. 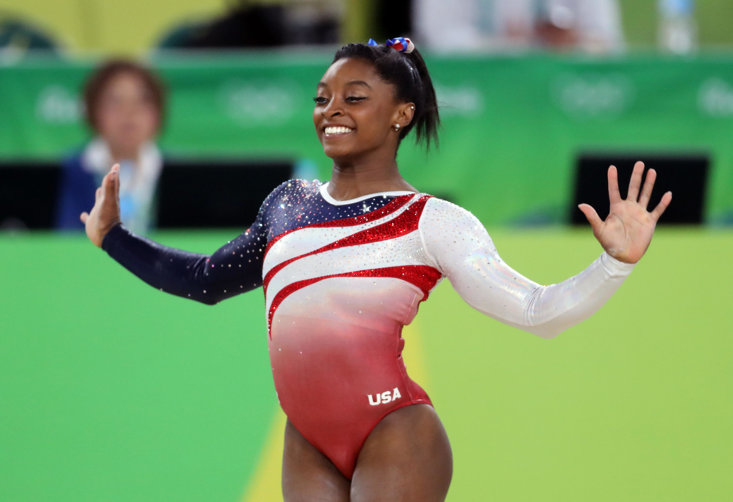 BILES' WITHDRAWAL WAS A BRAVE DECISION OTHERS WILL LEARN FROM

There was initial talk that Simone Biles was suffering from a physical injury when she pulled out of the women’s artistic team all-around, but her insistence afterwards that it was a mental concern which forced her to pull out stunned the world.

“I felt like it would be a little better to take a back seat, and work on my mindfulness,” said the 24-year-old. “I didn’t want the team to risk a medal because of my screw up.”

Her decision to withdraw from the event and make no apologies for her motivations was exactly the type of move a role model in the spotlight should be making. She, and others like her, will be an inspiration to many future Olympians with exactly that sort of leadership and honesty. It’s really ok not to be ok.

x
Suggested Searches:
Manchester United
Liverpool
Manchester City
Marcus Rashford
Premier League
More
sports
From Anthony Joshua to Cristiano Ronaldo, The Sportsman’s 2187/1...
The weekend is fast approaching which can only mean one thing, The Sportsman’s weekly accumulator [ ... ]
sports
Prince, Tyson Fury, Jose Mourinho - Sport's Greatest Ever Press...
Nobody does press conferences like the world of sport. Whether it’s Premier League managers directing [ ... ]
sports
How Elite Athletes Like Ronaldo And LeBron Have Adapted Their...
Cristiano Ronaldo’s goal for Manchester United in their 2-1 loss to Young Boys last night showed [ ... ]
sports
Teenage Kicks: Raducanu Joins Elite Group Of Top British Sporting...
Emma Raducanu stunned the world with her incredible US Open final win in straight sets over Leylah Fernandez. [ ... ]
sports
Enter The Dragon: Bryan Danielson Shakes Off ‘Daniel Bryan’
Daniel Bryan is dead. Long live ‘American Dragon’ Bryan Danielson. Whatever you know him [ ... ]
sports
The Shape Of Punk To Come: AEW Return To Chicago For All Out
AEW returns to pay-per-view with All Out on Sunday night, broadcasting live from the Now Arena in Chicago, [ ... ]
sports
Rebuilding Ric Flair: How Vince McMahon And Triple H Saved 'The...
‘Nature Boy’ Ric Flair returned home on Sunday night, when he made his return to the National [ ... ]
sports
The Superhuman Superstars Inspiring A New Generation At The...
The Paralympics are well underway and some of the most inspirational humans the world has to offer are [ ... ]
sports
From Undisputed To A Little Bit Of The Bubbly, Chris Jericho's...
Wrestling legend Chris Jericho will put his career on the line when he faces MJF at AEW All Out on 5th [ ... ]
sports
From Fireworks In France To Disco Demolitions: The Ugliest Conclusions...
Last night we saw the match between OCG Nice and Marseille abandoned as a result of disgraceful behaviour [ ... ]
sports
Many Happy Returns - Becky Lynch And Brock Lesnar Shake SummerSlam
‘Comeback’ was the key word at WWE Summerslam on Saturday night as over 50,000 fans at Allegiant [ ... ]
sports
Sports vs Videogames: When Tyson, Zlatan and LeBron Raged Against...
After a drawn-out legal dispute, Manchester United will be renamed ‘Manchester UFC’ on the [ ... ]
sports
From Ruthless Aggression To Out-Rapping The Rock, John Cena’s...
John Cena takes to the ring on Saturday in his first pay-per-view main event for over three years, when [ ... ]
sports
CM Punk Prepares To Return - Will He Drop Another ‘Pipe Bomb’?
While nothing is 100% sure in the world of pro wrestling, all credible indicators point to the fact [ ... ]
sports
WWE SummerSlam Brings Cena, Edge And More To Nevada
SummerSlam has traditionally been WWE’s second-biggest event of the year, below only WrestleMania [ ... ]
sports
Farewell Tokyo, Hello Paris! How Will Team GB Look At The 2024...
So the curtain has come down on Tokyo 2020 and although this was the ‘extended version’ [ ... ]
sports
Another Astonishing Olympics For Team GB - But Is This The Peak?
We didn’t know if it would even take place, but the sun has set on a Tokyo Olympics that has thrilled [ ... ]
sports
Day 14 Olympics Round-Up: Kenny Becomes First Female Brit To...
We are in the final straight of the spectacle that is Tokyo 2020 and while this great Olympics is drawing [ ... ]
sports
Day Eleven Olympics Round-Up: Thompson-Herah Wins Double-Double...
An astonishing day of Olympic action unfolded in the Japanese capital as there were more golds for Team [ ... ]
sports
Mixed Events Are Here To Stay After Team GB's Tokyo Olympics...
Tokyo 2020 has seen the introduction of some new encapsulating mixed events that could be the future [ ... ]
sports
Italy Continue To Defy The Odds As Perfect Summer Continues...
There could be no such thing as the perfect summer of sport, but if there is, Italy are experiencing [ ... ]
sports
Day Ten Olympics Round-Up: GB Win Eventing Gold As Simone Biles...
Day 10 of Tokyo 2020 had plenty to offer as Team GB claimed another gold to add to their impressive [ ... ]
sports
Day Eight Olympics Round-Up: Relay Gold For Team GB Despite...
Team GB enjoyed more success on day eight of Tokyo 2020 as further history has been made in these historic [ ... ]
sports
From Dina To Daley, Here's What's In Store For Week Two At Tokyo...
The first week of Tokyo 2020 has been full of excitement and has produced some great entertainment. [ ... ]
sports
Day Five Olympics Round-Up: Mallory Franklin Takes Silver In...
Day six of Tokyo 2020 brought more excitement and Great Britain managed to pick up a few more medals [ ... ]
sports
From Raging Bull To Rudy, Ten Of The Greatest Sports Biopics...
This week saw the trailer drop for King Richard, a brand new biopic of Richard Williams, father [ ... ]
sports
Day Five Olympics Round-Up: GB Relay Team Storm To Gold & Dujardin...
Tokyo 2020 continues to thrill, with Great Britain collecting more medals on Wednesday and some high-profile [ ... ]
sports
Simone Biles Should Be Applauded For Her Withdrawal, Says Mental...
Simone Biles’ decision to withdraw from the all-around gymnastics final has been applauded by [ ... ]
sports
Day Four Olympics Round-Up: More Medals For Team GB In Best...
Great Britain has never had such a successful start to an Olympic Games. As day four comes to a close, [ ... ]
sports
Tokyo Olympics Day Three Round-Up: Team GB Enjoy A Magic Monday
It was a thrilling Monday for Team GB as the squad brought home five medals, including three golds, [ ... ]