Football
News
A goal and an assist from the man returning from injury saw Belgium beat Denmark 2-1
Gary Maiden
18:57, 17 Jun 2021

A second half Kevin De Bruyne masterclass saw Belgium come from behind to beat Denmark 2-1 and secure their passage into the knockouts at an emotionally charged Parken Stadium.

Trailing 1-0 at the interval after Yousuff Poulsen’s opener inside two minutes, De Bruyne assisted the equaliser and then scored the winner to assert himself as one of the best midfielders in world football. His pure brilliance turned the game on its head after Denmark used the motivation of wanting to honour their midfielder Christian Eriksen, who is recovering in a Copenhagen hospital, to take a surprise early lead. A tribute was planned for Eriksen on 10 minutes, but the best way for his Danish teammates to honour him was with an early goal, and that’s exactly what they delivered when after just one minute and 39 seconds, Poulsen fired home to send an emotional Parken Stadium into scenes of beautiful celebration.

Lyon centre half Jason Denayer criminally gifted the ball to Spurs man Pierre-Emile Hojbjerg on the edge of the area, who found Poulsen in space and he fired beyond Thibaut Courtois into the far corner. It was the second-fastest goal ever scored in a European Championship match, with Russia’s Dmitry Kirichenko scoring against eventual winners Greece after 65 seconds of their Euro 2004 encounter.

Despite their early lead, Denmark were in no mood to rest on their laurels, with Joakin Maehle and Daniel Wass coming close to extending their early lead in the opening seven minutes. The Dane’s four shots in the opening eight minutes proved their early dominance, with FIFA’s number one ranked team in the world struggling to lay a glove on their determined opponents.

The planned 60 seconds of applause saw play stopped after 10 minutes, with players from both sides sharing embraces. Eriksen himself is recovering in hospital just a few hundred metres away from the stadium, and there is every chance that he would have been able to hear the tribute from his bed.

It was a powerful moment that showed football at its best.

The following 25 minutes brought about a bit of a dip in terms of attacking intent, although it was Kasper Hjulmand’s men who continued to play with more purpose and the half ended with Mikkel Damsgaard and the lively Martin Braithwaite coming close, with Denmark’s nine attempts to Belgium’s singular effort showing just how dominant the hosts were. In fact, it was the first time since Spain in 2016 that the Red Devils had been restricted to just one attempt in the first half of a match. 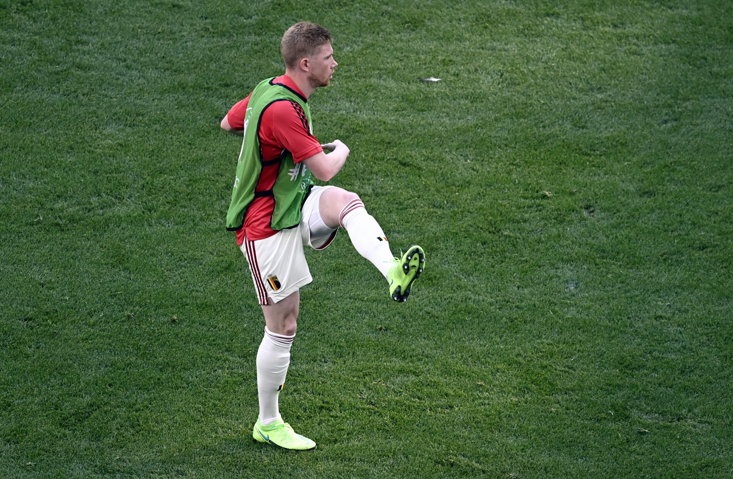 De Bruyne was not deemed fit enough to start

It was clear for all to see that Roberto Martinez needed to inject some creativity into his side, and he did so by introducing De Bruyne after the interval.

It took less than 10 minutes for the Manchester City man to impose himself, as he collected Romelu Lukaku’s pass and instead of pulling the trigger, manoeuvred into space and cut back a perfect pass for Thorgan Hazard to smash home from close range.

De Bruyne has now managed eight assists in major tournaments since the 2014 World Cup – a figure matched only by compatriot Eden Hazard, who himself was introduced on the hour mark. Perhaps predictably, the pair linked up to put Belgium ahead, with Hazard picking a Lukaku pass and squaring left to De Bruyne who picked his corner and completed the turnaround.

With just minutes left on the clock, Braithwaite’s header had the beating of Courtois, but his looping effort grazed the crossbar on its way over. The Group B favourites held on in the end, but Denmark did themselves, and Eriksen, proud on a night that football showed its compassionate side.

The 11 that were on the pitch as Belgium took the lead represented arguably their strongest side, and with qualification to the last 16 now boxed off, they can start plotting their assault on the latter stages. A well-rested De Bruyne playing behind a fit and firing Lukaku can cause anyone problems, and 2021 could finally be the year that this talented generation finally fulfil their destiny.