Khris Middleton netted 20 fourth quarter points to turn game three on its head and lead the charge as Milwaukee Bucks fought back from behind to beat Atlanta Hawks by 113-102.

The Bucks had trailed for long spells in Atlanta, and went into the final quarter down by 85-83, but Middleton rallied to inspire his side to victory and take a 2-1 lead in the Eastern Conference finals.

Game four will also take place in Atlanta, but no matter the score there, the Bucks will have home advantage in game five and six if necessary, making them the strong favourites with Betfred to progress to their first NBA finals since 1974.

While Middleton lead the late comeback, he wasn’t alone in producing his best when it mattered most, with Giannis Antetokounmpo also contributing 33 points of his own. The pair combined to register 71 of the Bucks’ 113 points and put the 1971 NBA champions firmly in the driving seat.

It should come as no surprise to see Antetokounmpo involved in this crunch clash, with the Greek being named NBA MVP in both 2019 and 2020. However, the 26-year-old was keen to redirect the praise to his teammate, waxing lyrical about Middleton’s performance.

“What I saw today was unbelievable,” he said. “It was greatness.” 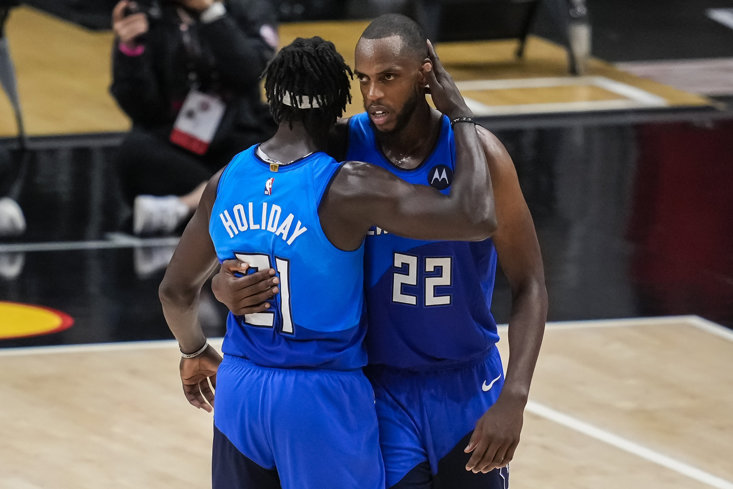 He wasn’t wrong. Middleton’s 38 points was a game high total, and was instrumental in a stunning comeback after the Hawks had led by 15 points in the first quarter. His final quarter showing proved to be the difference between the two sides as the Bucks finished proceedings with an impressive 25-7 scoring run to seal a crucial victory.

The on-court action represented a comeback on the night itself as well as in the series, with Atlanta winning the first game and Milwaukee reigning supreme in games two and now three.

No secret had been made of the fact that Middleton had missed two-thirds of his attempts from the field entering Sunday’s encounter, but when it mattered most he found his rhythm.

“I just finally got them to go,” a relieved Middleton explained. “I've been struggling some with the ball going in the basket, and finally it started dropping for me at the right time. I'm thankful for that.”

As were his teammates, who will be dreaming of a likely NBA finals series against a Phoenix Suns outfit who need just one more win to book their spot in place of the Los Angeles Clippers.

The job isn’t quite done for the Bucks, although if Middleton and Antetokounmpo can pick up where they left off in Wednesday’s game four clash, they should only require one more match to book their place in the final.