The dream has come true for Kiko Martinez. The Spanish veteran had been written off by critics, and derided by fans, in the build-up to his spectacular sixth round knockout of Kid Galahad. The new IBF featherweight champion had been criticised as a soft first opponent of Galahad’s reign, an opportunity to put a fading former world title holder on the ledger of the champion. But Martinez made a mockery of the insults, and the odds, by pulling off an incredible upset in Sheffield.

For five and a half rounds, this fight followed the script closely. Galahad started behind a quick jab, prodding away as Martinez ploughed forward in the way we have seen him do many times on these shores. The Qatari-born champion walked Martinez down brilliantly, pinning him in the corner and unloading rapid right-left salvos.

The second round seemed to underline the disparity there appeared to be between the two fighters. La Sensacion struggled to land anything at all on the Kid, coming up short while the home fighter answered with sharp counters. Martinez was beginning to look overmatched, with every one of his 35 years being evident as Galahad fired in uppercuts and overhand rights.

Galahad was moving Martinez round the ring, and in the third round he settled into a rhythm of right-left combinations, with the straight lefts having a particular effect. A cut opened over the eye of Martinez, and the end did not look far off. Nobody at this point could have predicted how dramatic that ending would be when it arrived.

The Spanish fighter came out with more urgency in the fourth, throwing solid lefts before pushing Galahad back to the ropes with straight rights. Kid Galahad picked his shots well as the round wore on, but Martinez finished strongly by backing his foe into the ropes. 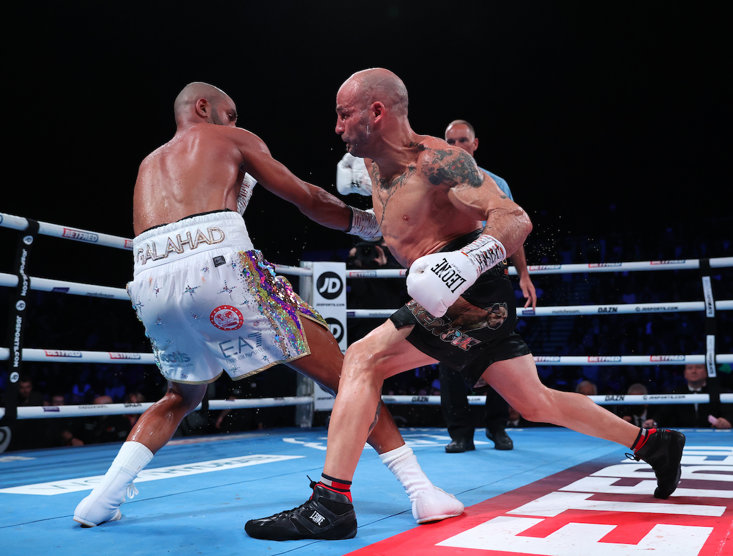 Sensing his opponent was warming to the task, Galahad landed a big uppercut to start round five. Without the benefit of hindsight, I noted that at this point it looked like Martinez was noticeably slowing. The veteran was still game, but appeared to be losing his slender grip on the fight as Galahad pulled ahead. Then boxing threw up one of those moments no other sport can replicate, as the underdog thundered in a crushing overhand right to send the champion to the canvas. The fight looked like it might end then and there, as Galahad toppled heavily to the unforgiving mat below. The champion rose like the warrior he undoubtedly is, no matter the result, but ended the round under heavy fire.

The message was survival in the next round. Still unsteady, it was paramount that Kid Galahad stayed away from Martinez to protect the IBF championship he won in August against Jazza Dickens. This strategy lasted mere seconds, as an absolutely thunderous right sent Galahad back to the canvas heavily. The fight was over and implausibly, almost impossibly, Kiko Martinez was the new IBF featherweight champion of the world.

The inquests will begin from here, and Galahad will have a long road back from such a defeat. It can be done, many great champions have overcome such setbacks to reign once more as kings of their sport. While it might be painful to think about, Galahad would do well to glance over at the man who defeated him tonight. Kiko Martinez last reigned as a world champion seven years ago, and was written off after multiple losses since. But as Saturday melts into Sunday, he wears a title belt once more. Tonight was the culmination of an incredible journey for Martinez. For Kid Galahad, that journey starts now.